The vast majority of Americans, regardless of political party, now say that American society and culture are in decline, according to a Thursday poll from the Trafalgar Group and Convention of States Action.

The poll surveyed 1,076 likely general election voters between Dec. 17 and Dec. 21 and reported a margin of error of 3%. Trafalgar employs a number of methods for conducting its polls, including live phone calls, automated calls, emails, text messages, and two other proprietary methods it does not share publicly. 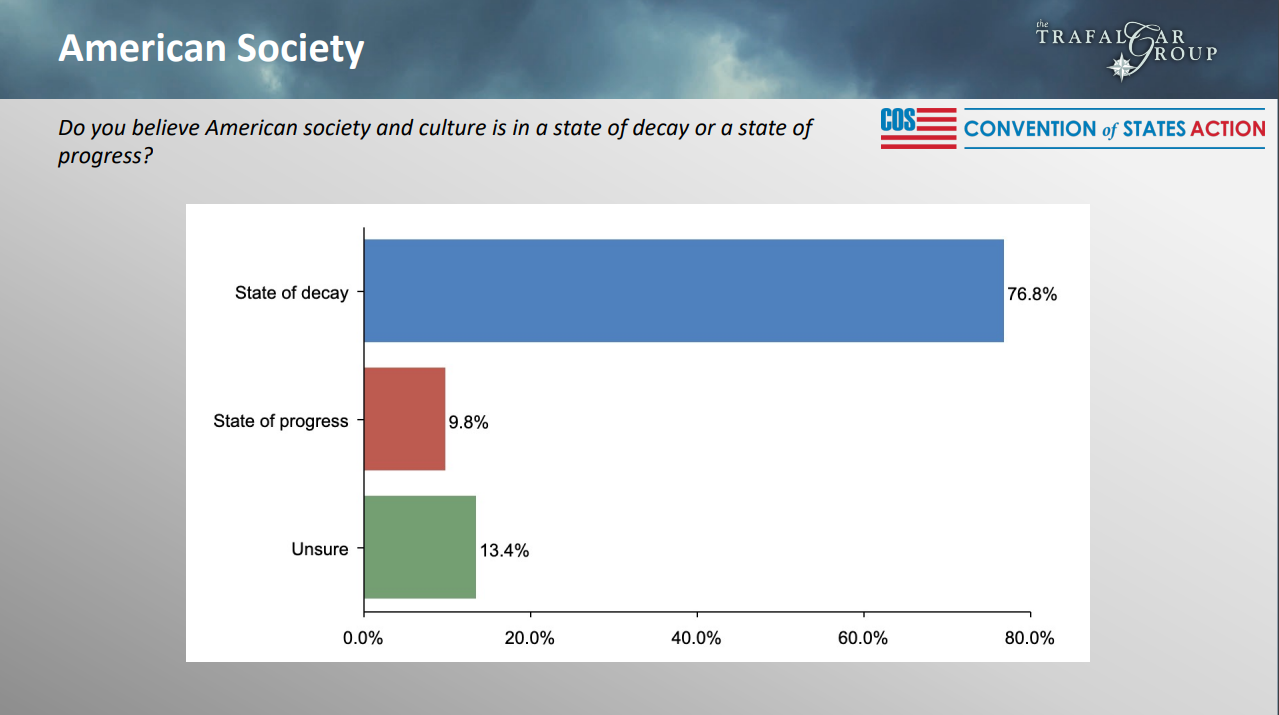 A poll from the Trafalgar Group and Convention of States. (Daily Caller)

“These horrific numbers go beyond politics to the heart of who we are as a nation and a people. Americans have always been fueled by hope and optimism, and now are united in disgust. Our leaders in Washington, DC are setting the tone, and clearly we need dramatic changes there in both parties in the next election. But ultimately, it is the grassroots citizens of this great nation — everyday Americans fighting to return us to our foundations — who are going to get us back on course,” Mark Meckler, president of the Convention of States Action, said in a statement provided to the Daily Caller.

“By permanently reigning in the federal government and restoring the balance of power between DC and the states to its original Constitutional design, we have an opportunity to change these numbers, now and for the future,” Meckler added. (RELATED: EXCLUSIVE POLL: Biden Is ‘Not Concerned’ About Harms Of High Inflation, Majority Of Americans Say)

The Trafalgar Group was one of only a few polling firms that accurately predicted Donald Trump’s victory in the 2016 presidential election. The firm was also among the few that predicted Republican Florida Gov. Ron DeSantis’ win in 2018, as well as Republican victories in New Jersey and Virginia in November of this past year.

The poll landed the same day as a poll showing President Joe Biden’s approval rating was underwater in all but three states. Biden’s approval rating has consistently dropped since he entered office at 54%, thanks largely to the resurgence of COVID-19, the border crisis, supply chain chaos, and his botched withdrawal of U.S. troops from Afghanistan.