Crimson Trace of Wilsonville, Ore., is best known for its innovative, firearm-mounted laser sights and lights; however, the company has expanded its offerings to include tools, dot-style sights and riflescopes. Concerning the latter, four new lines debuted in 2021—Hardline, Hardline Pro, Brushline and Brushline Pro—and the Brushline Pro 4-16X 42 mm BDC is the subject of this review.

Available in 22 configurations, including handgun-, shotgun– and muzzleloader-specific versions, the Brushline Pro series is available with either a 1″ or 30 mm, two-piece, matte-black, aluminum maintube. Consistent across the line is an oversize ocular housing, on which the magnification band and eyepiece focus are found. Measuring 1.80″ at its widest, the housing reportedly allows for faster adjustments but could interfere with the rifle’s operation, depending on the setup. The magnification band and eyepiece focus have purchase-enhancing grooves, and similar elements are found on the turret caps and the objective focus knob, which is graduated from
50 to beyond 1,000 yards. 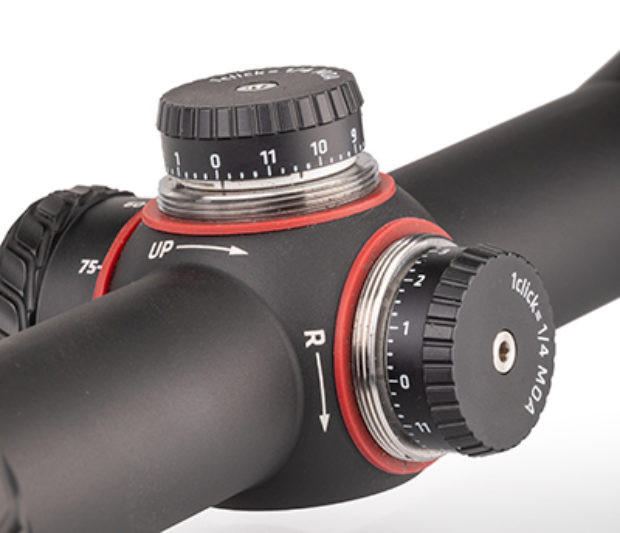 Valued at 1/4 m.o.a., the Brushline Pro’s clicks are positive, tactile and audible. Thanks to its tool-less zero-reset feature, it’s simple to return to zero after dialing in a shot, as well as to quickly confirm the turret wasn’t inadvertently moved. The eye relief of the 4-16X 42 mm model measures a forgiving 3.7″ to 4″.

According to Crimson Trace, it uses a proprietary multicoating called “MOC” denoting Maximum Optical Clarity on its lenses. The benefits are: 90 percent light transmission, scratch resistance and improved image quality.

Designed for use by hunters, the Brushline Pro 4-16X 42 mm BDC has a compensating-type reticle, though it’s non-illuminated. The company is currently developing a customizable, ballistic calculator to determine holds. Keep in mind, though, that as a second-focal-plane riflescope it will need to be set to a specific magnification (usually highest) to effectively employ the reticle. 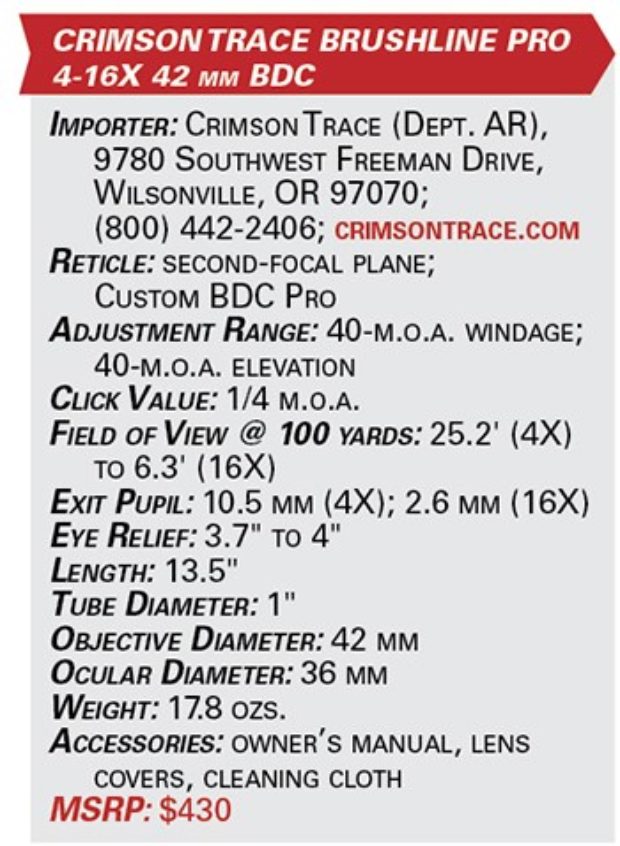 Crimson Trace makes bold claims about the resilience of the Brushline Pro series; in fact, the company offers a lifetime warranty. Still, we put it through the wringer.

First, to test the company’s claim about zero retention over a lifetime of recoil, we mounted the scope atop a Savage Impulse Hog Hunter chambered in .300 Win. Mag. More than 300 rounds were fired through the rifle with no change in zero. That’s telling. It was during this time that, when shooting across a wide range of lighting conditions, we noted the fine edge-to-edge clarity, brightness and resolution of the scope. In side-by-side tests, its optical quality was equal to—if not better than—scopes from other long-established brands.

To assess its ability to withstand temperature extremes and water infiltration, the scope spent the night in a freezer, followed by immediate submersion in extra-hot tap water. No bubbles were observed, which is indicative of quality seals, and only the faintest internal fogging occurred, which dissipated within minutes.

For the final test, we mounted the scope atop a Savage Model 111 Long Range Hunter in .338 Lapua Mag. and proceeded to “shoot the square” at 100 yards. The process created four, three-shot groups, and from their consistent dispersion, the scope’s adjustment mechanisms were judged to be accurate and repeatable.

In diversifying its offerings, Crimson Trace has entered a congested marketplace. But, given the price-to-performance ratio of its Brushline Pro scopes, the company has the potential to make significant inroads.