Biden announced two policies in 2021 that affect almost 100 million workers. The first policy is a vaccine and testing rule for private business with 100+ employees. The second policy is a vaccine mandate for any health care worker operating out of a facility that receives Medicaid and Medicare funding, minus those who qualify for religious and medical exemptions. While the policies were announced in November, enforcement has not yet begun due to lawsuits.

The White House has maintained the mandates’ legality, with the administration continuing to push businesses to move ahead with the vaccine and testing rule. White House press secretary Jen Psaki said in a statement Thursday evening that the policies “are critical to our nation’s COVID-19 response.”

“Unvaccinated Americans continue to face a real threat of severe illness and death — including from Omicron,” Psaki said. “The OSHA [Occupational Safety and Health Administration] rule ensures that employers are protecting their employees by encouraging workers to get vaccinated and requiring unvaccinated workers to mask and test. The CMS [Centers for Medicare & Medicaid Services] healthcare rule protects vulnerable patients by requiring that covered healthcare providers get vaccinated. The need and the urgency for these policies is greater than ever, and we are confident in the legal authority for both policies.” 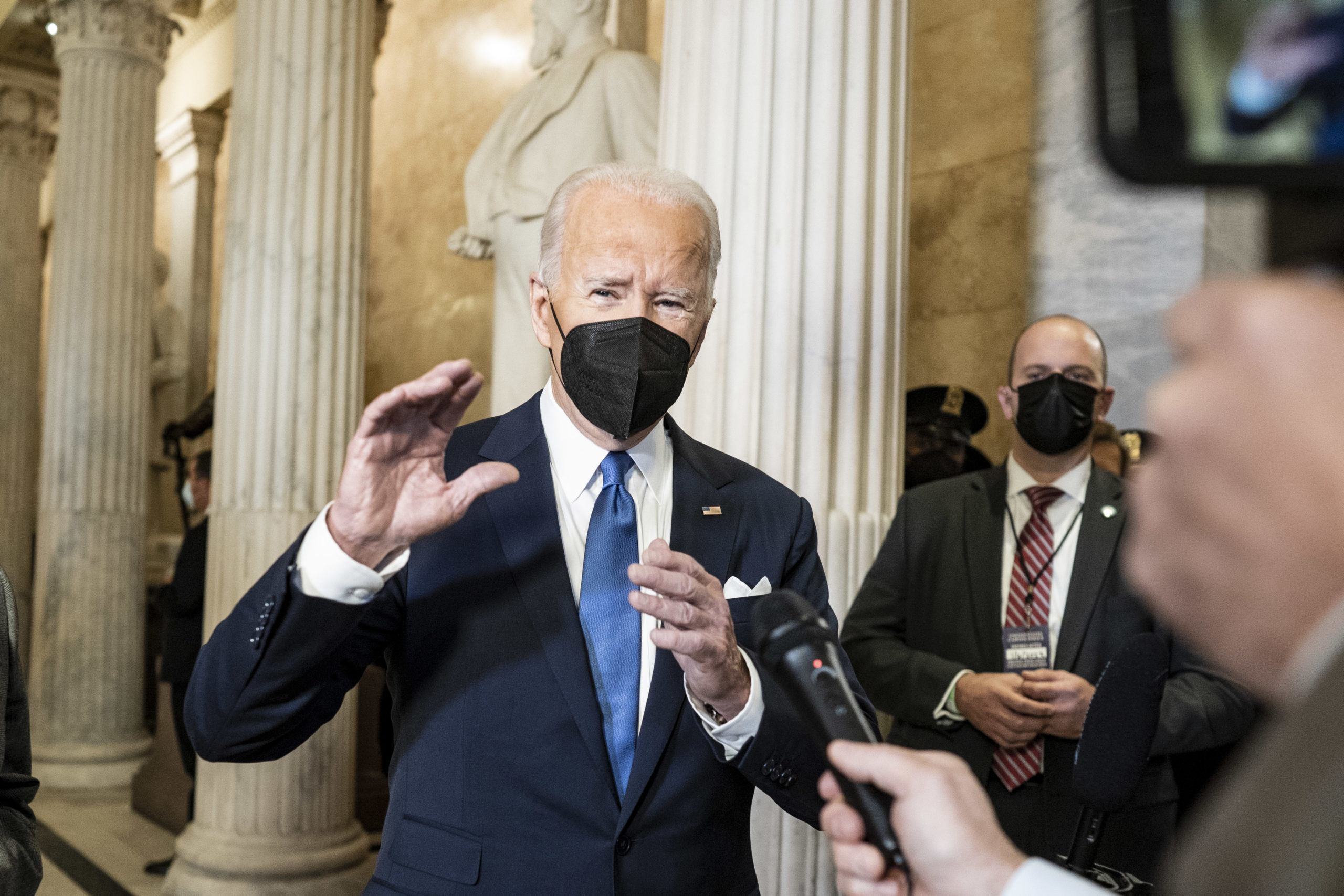 WASHINGTON, DC – JANUARY 06: President Joe Biden speaks to the media as he departs with Vice President Kamala Harris after they spoke at the U.S. Capitol on January 6, 2022 in Washington, DC. One year ago, supporters of President Donald Trump attacked the U.S. Capitol Building in an attempt to disrupt a congressional vote to confirm the electoral college win for Joe Biden. (Photo by Ken Cedeno-Pool/Getty Images)

The Supreme Court will first hear arguments surrounding the vaccine or testing mandate for private businesses, which Biden announced in September and OSHA issued rules on in November. The United States Court of Appeals for the Fifth Circuit issued a temporary halt of this OSHA rule Nov. 6. While it was upheld by the court Nov. 12, the Sixth Circuit Court of Appeals overturned the ruling in December. (RELATED: Companies, Business Groups Have Plans To Push Back On Biden’s Vaccine Mandate)

The Department of Justice (DOJ) is arguing that OSHA’s ruling is legal because COVID-19 “is both a physically harmful agent and a new hazard” and that unvaccinated employees exposed to it are at the biggest risk of contracting, spreading and subsequently suffering “serious health consequences.” The DOJ will also argue that the vaccine or testing rule is needed to protect employees from getting COVID-19 through working, according to a portion of the DOJ’s briefs provided to the Daily Caller.

“[T]he Nation is facing an unprecedented pandemic that is sickening and killing thousands of workers around the country, and any further delay in the implementation of the Standard will result in unnecessary illness, hospitalizations, and deaths because of workplace exposure to SARS-CoV-2,” the DOJ will argue.

The U.S. Department of Health and Human Services’ (HHS) Centers for Medicare & Medicaid Services rolled out the second vaccine rule for health care workers in November. This would affect around 17 million workers, according to Fox News, and it’s been blocked by two lower courts in 24 states.

According to a portion of briefs provided to the Caller, the DOJ will argue for this mandate that healthcare centers participating in Medicare and Medicaid have had to adhere to rules adopted by the secretary of HHS for a long time. The DOJ also plans to note that similar vaccine requirements have been adopted by healthcare centers around the U.S.

“[T]he exceptionally urgent need to reduce the risk of COVID-19 exposure for Medicare and Medicaid patients given the anticipated winter surge in infections tips the equities overwhelmingly in favor of a stay,” the DOJ will argue, pointing out the increase in cases in recent weeks due to the Omicron variant.

The justices will be hearing the case “on a rushed basis,” according to CNN. This means a ruling could come within days.