A teacher training at a Texas middle school reportedly instructed teachers to not tell parents if a student tells them they identify as transgender or non-binary, according to documents reviewed by the Daily Caller News Foundation.

“DO NOT contact their parents and out them to their families,” a teacher professional development training at Walsh Middle School (WMS) in Round Rock Independent School District (RRISD), told teachers, according to documents. 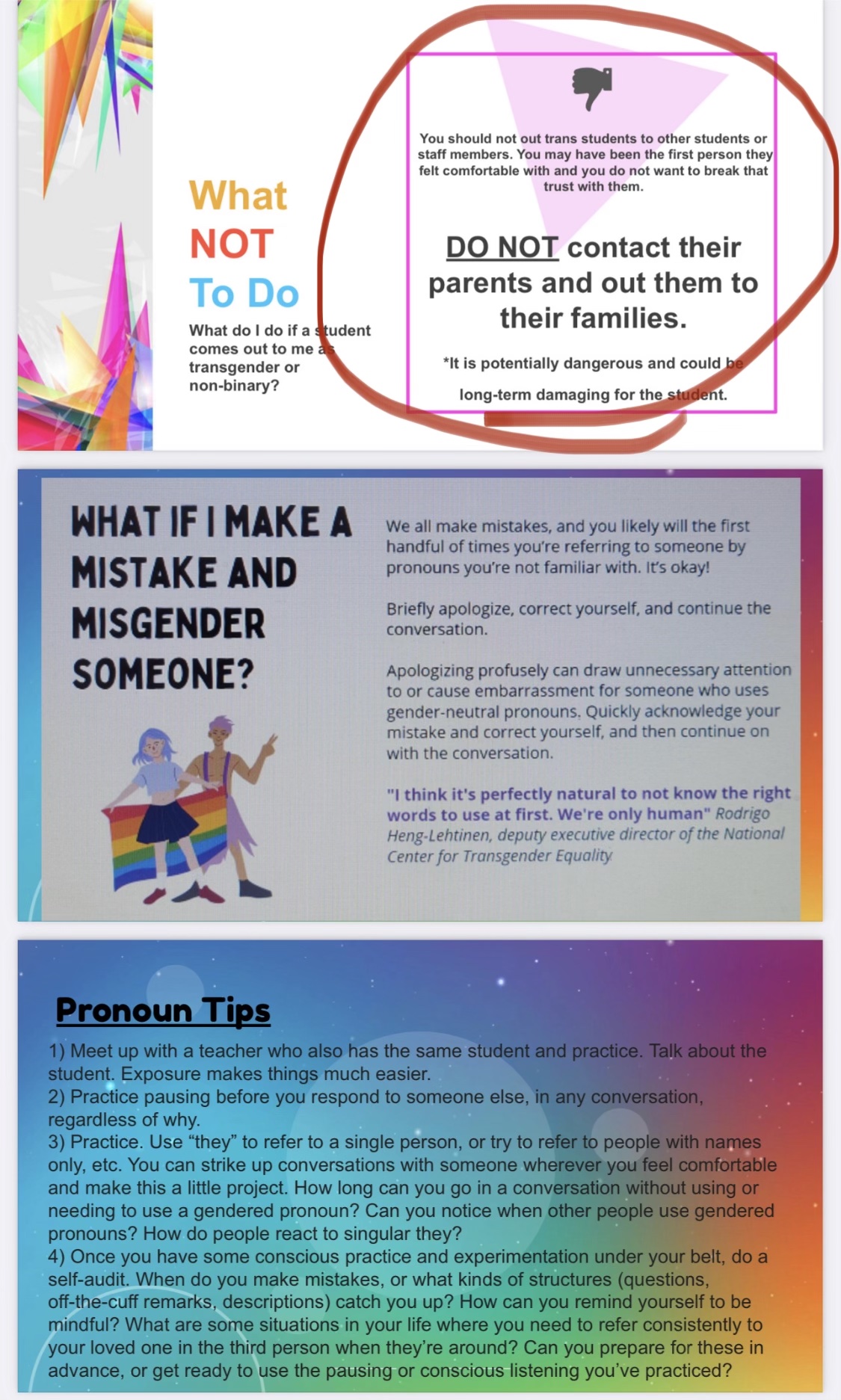 The training also provided teachers with advice if they “misgender someone,” advising them to “correct students” if they use the wrong pronouns, the documents show.

“Apologizing profusely can draw unnecessary attention to or cause embarrassment for someone who uses gender-neutral pronouns,” a training document said. Practice using “‘they’ to refer to a single person, or try to refer to people with names only.” 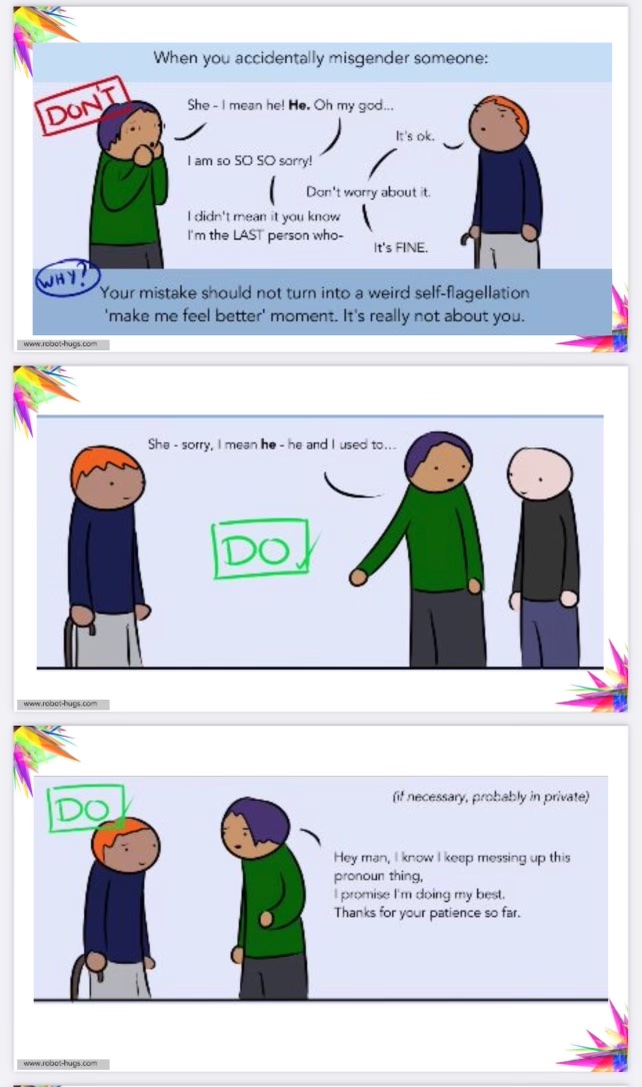 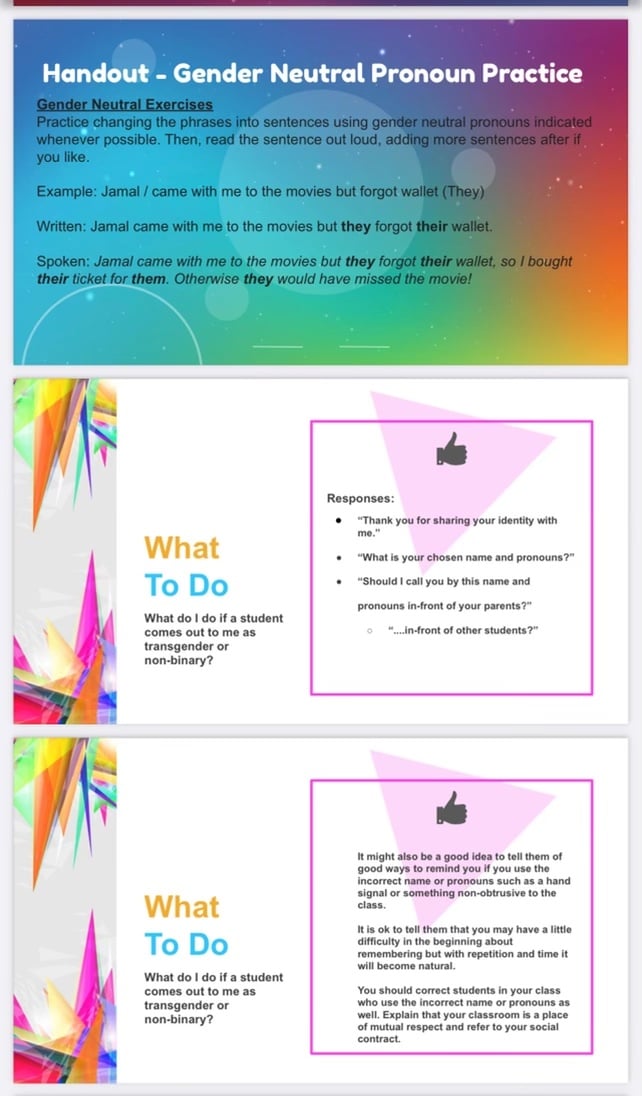 “How long can you go in a conversation without using or needing to use a gendered pronoun? Can you notice when other people use gendered pronouns? How do people react to singular they?” the training asked teachers to consider.

Another slide said strangers, even school counselors, can be “dangerous” to a transgender student.

“They can ruin your entire life, get you kicked out of your home by your parents, or make other teachers treat you awfully and make your school experience miserable,” the slide said. “They can even get you killed by outing you without your permission, which they are usually expected to do.” 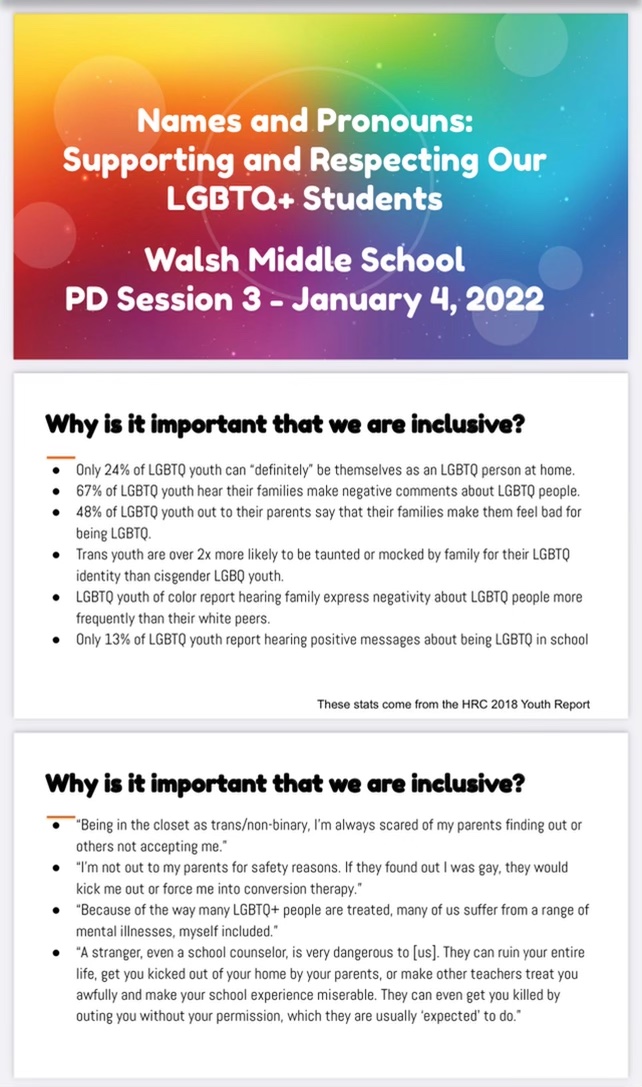 One RRISD teacher, who wanted to remain anonymous, said they didn’t agree with the training and felt uncomfortable keeping parents out of the loop when it comes to their child.

“The first time I was asked by a student to refer to themselves by a different gender, a different name and different pronouns I went to my principal and counselor for help, I have never received an email like that,” she told the DCNF. “I asked if I could contact the parents first to make sure that they were aware of this because I would want to know as a parent.”

“They told me no, that the child could get beat and maybe not be accepted by their family,” she said. “I was to accept and comply. I cried in my classroom. I cried all the way home. That was two years ago.”

Christie Slape, a mother whose kids attend schools in RRISD, said she was shocked when she learned that the district was encouraging teachers to withhold information from parents.

“Parents know their child best and have the right to know about a decision this consequential,” she said. “As a former high school teacher and parent of 4 children in the district, I understand that teachers are put in a difficult position.”

“If they are asked to refer to a student as an identity other than documented in school records, the teacher has the moral obligation and responsibility to communicate with the parents,” she added. “It is troubling to think that teachers are being told to be secretive and circumvent a parent’s input on this weighty issue.”

“The National Association of School Psychologists has advised that transgender youth who experience low family acceptance of their gender identity are more likely than peers to experience depression, substance abuse, and suicidal thoughts,” according to TASB’s document on “Legal Issues Related to Transgender Students.”

“As such, a student may request that a district employee not tell his or her parent about the student’s gender identity,” according to TASB guidance. “School officials should proceed with caution in this case, in accordance with district policy regarding student counseling, crisis intervention, and child abuse.”

Another RRISD parent, Eric Norbut, told the DCNF that he thinks most teachers and administrators in the district still teach traditional family values, although he is “very concerned about an emerging mantra that teachers know better than parents when it comes to educating their kids.”

“I firmly believe that parents possess the duty to educate their children, even if we may choose to delegate portions of that duty to schools,” he said. “This training is the latest example of what I believe is a concerted effort to marginalize parents in their role of raising and guiding their children.”

RRISD mother Kieu Trang said what she has recently seen across the nation, including forced lockdowns, masks, vaccines, free speech limitations and censorship reminds her of her time growing up in communist Vietnam.

“We have achieved our American dream,” she said. “I am so grateful for the US for everything that we have today. But it looks to be something in the past. My children may not be afforded with the same opportunities that we were given!”

She is appalled with “everything” going on in the school system right now and said a “school has no business … withholding information” regarding their children.

“It is unacceptable that teachers have been trained to ‘not contact parents’ when parents should be the first people contacted,” she told the DCNF. “Are they teaching children that it is OK to hide from parents? Are they intentionally grooming and prepping my children to be something that they might not want to be in the first place? What else are they hiding?”

RRISD said the presentation was not reviewed or approved by the district or campus administration.

“It was a peer-to-peer training session with about 15 teachers,” Jenny LaCoste-Caputo, RRISD’s chief of public affairs and communications told the DCNF. “There is information in this presentation that is counter to Round Rock ISD’s practice of partnering with parents in their child’s education. We are reviewing this incident and ensuring protocols are in place that such presentations are reviewed and approved in advance.”