President Joe Biden nominated three new Federal Reserve officials Friday, as the country suffers from inflation and the Fed has suggested it plans to raise interest rates in an effort to alleviate rising prices.

Biden nominated Sarah Bloom Raskin to serve as the Federal Reserve’s vice chair for supervision, a key regulatory role in the central banking system. He also nominated Lisa Cook and Philip Jefferson to serve on the Fed’s Board of Governors.

The president noted that the country is working through “unique economic challenges” and needs “sound, independent leadership” in a statement issued Friday. He called Raskin “among the most qualified nominees ever for” the position and touted Cook and Jefferson as “talented economists with decades of experience.”

“Together with Chair Powell and Dr. Brainard, who I renominated last month, this group will bring much needed expertise, judgement and leadership to the Federal Reserve while at the same time bringing a diversity of thought and perspective never seen before on the Board of Governors,” Biden said. “They will continue the important work of steering us on a path to a strong, sustainable recovery, while making sure that price increases do not become entrenched over the long term. I have full confidence in the strong leadership of this group of nominees, and that they have the experience, judgement, and integrity to lead the Federal Reserve and to help build our economy back better for working families.”

Raskin previously worked as a Federal Reserve governor from 2010 t0 2014. Following this stint, she served under former President Barack Obama as deputy secretary of the U.S. Treasury Department. She is married to Democratic Maryland Rep. Jamie Raskin. 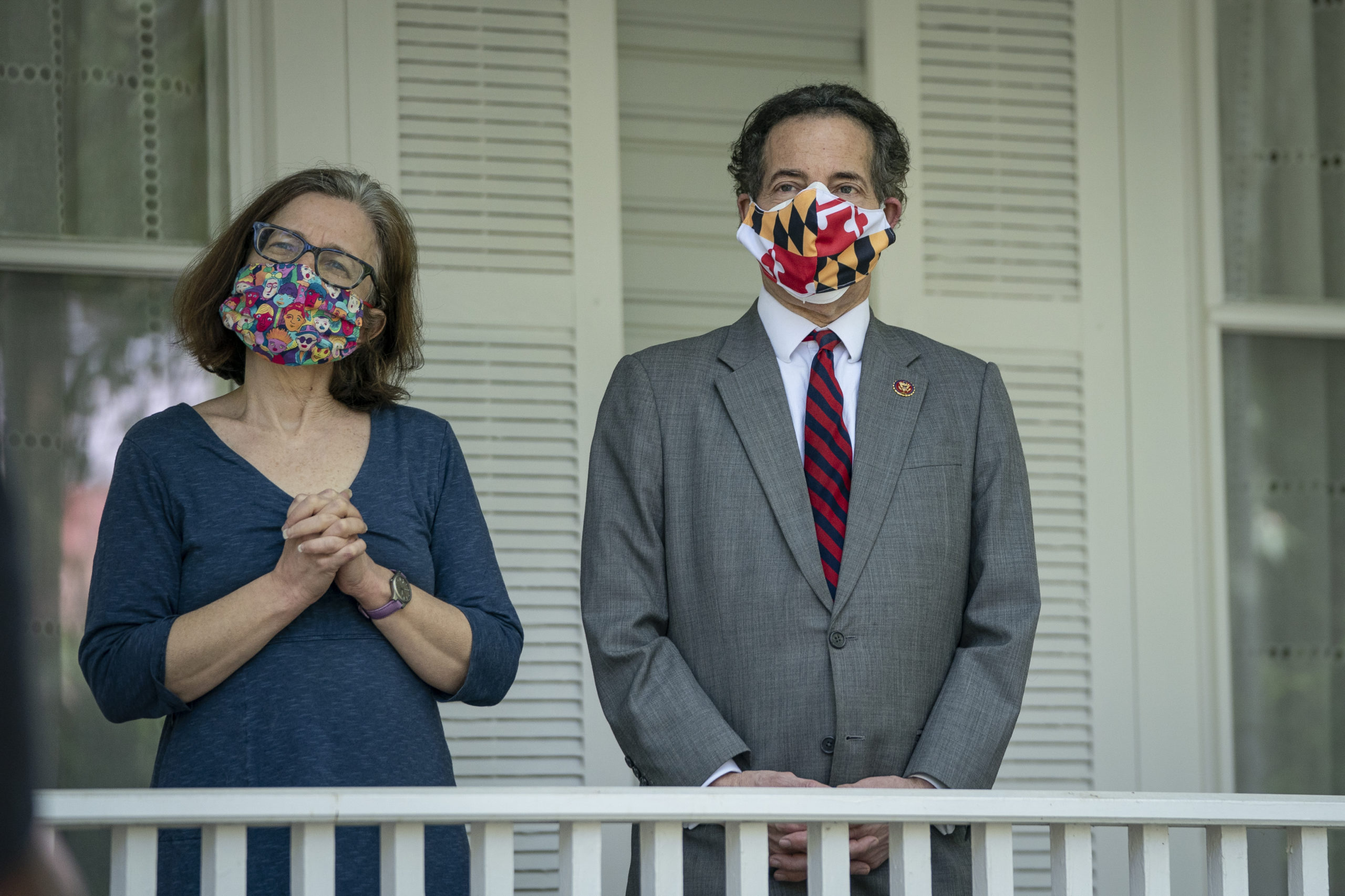 TAKOMA PARK, MD – MAY 04: (L-R) Sarah Bloom Raskin and U.S. Rep. Jamie Raskin (D-MD) listen as a group of Maryland residents, calling themselves the ‘Pandemic Comforters,’ sing in the front yard of his home on May 4, 2020 in Takoma Park, Maryland. The singers wanted to use the nice weather to show gratitude to Rep. Raskin for his work in Congress and offer their prayers during the coronavirus pandemic. (Photo by Drew Angerer/Getty Images)

While Biden held up her experience at the Federal Reserve, she could face problems clearing the Senate, according to CNBC. At least one Republican lawmaker serving on the U.S. Committee on Banking, Housing and Urban Affairs voiced his concerns over positions she has held.

“Sarah Bloom Raskin has specifically called for the Fed to pressure banks to choke off credit to traditional energy companies and to exclude those employers from any Fed emergency lending facilities. I have serious concerns that she would abuse the Fed’s narrow statutory mandates on monetary policy and banking supervision to have the central bank actively engaged in capital allocation,” Republican Pennsylvania Sen. Pat Toomey said, adding that he’d also have to “closely examine” whether Cook and Jefferson should serve.

Cook serves as a steering committee member for the Center for Equitable Growth, a liberal think tank. She’s a professor at Michigan State University and previously also served under Obama, working as a senior economist for his administration.

Jefferson’s career has largely been focused on academics, and he’s currently vice president for academic affairs and dean of faculty at Davidson College. He serves on multiple boards and previously worked as an economist at the Board of Governors of the Federal Reserve System.

Biden’s latest three nominees add onto the president’s previous picks – Fed Chair Jerome Powell and Fed Governor Lael Brainard, the latter of whom Biden tapped to be the next vice chair. Both choices will likely garner bipartisan support in the Senate. (RELATED: ‘A Risk I’m Worried About’: Top Fed Officials Start Pushing Back On Powell’s Inflation Assessment)

The White House, in announcing Biden’s latest picks, focused on the “long overdue diversity” the trio will bring to the Federal Reserve should they be confirmed.

“They will bring long overdue diversity to the leadership of the Federal Reserve, including the first Black woman in history to serve on the Board and the fourth Black man to serve on the Board,” the White House said. “If all five are confirmed, the Board will be majority women. When we have leaders in the Federal government that reflect the diversity of our country, it results in better outcomes for all Americans. That is especially true in our economy where too many groups historically have been left behind, or left out altogether.”