A school district in a conservative-leaning community outside of Portland, Oregon, banned political symbols and ideology, but wealthy progressives and school administrators have snubbed the new guidelines, the Daily Wire reported.

Four board members of Newberg Public Schools (NPS) recognized what they believed to be political indoctrination in its schools and passed a ban on political symbols, including flags, signs and clothing, in August 2021. Teachers unions and progressive community members are now suing the district’s school board members and attempting to unseat them with help of those who funded the recall effort.

District administrators are not enforcing the school board’s policy, and wealthy progressives are working to target and subvert the power of the board members through a recall effort and doxxing, which even got one member fired from his job, the Daily Wire reported. Parents reportedly say they’ve filed complaints and emailed teachers about their concerns, but they continue to be ignored.

In recent years, political symbols, such as pride flags and Black Lives Matter (BLM) flags, have littered NPS hallways and classrooms, the Daily Wire reported. Some students were reportedly forced to pledge allegiance to the pride flag.

In June 2021, the NPS school board passed an anti-racism resolution. 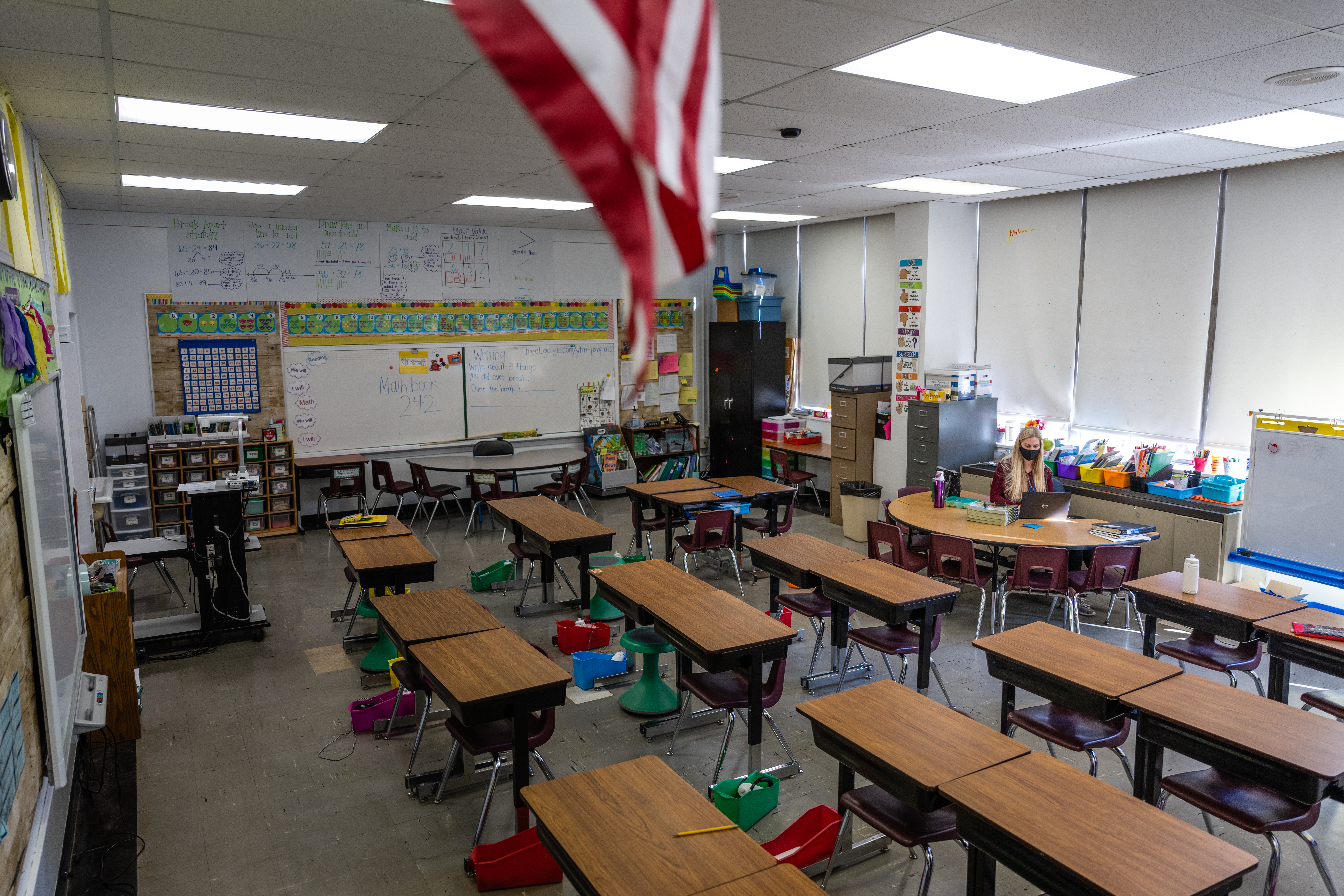 A teacher interacts with students virtually while sitting in an empty classroom during a period of Non-Traditional Instruction (NTI) at Hazelwood Elementary School on January 11, 2022 in Louisville, Kentucky. (Photo by Jon Cherry/Getty Images)

The district said it would “work to be actively anti-racist and dismantle systemic racism in our schools” and affirmed “the value and importance of culturally responsive pedagogy and instructional practices,” according to the resolution. The policy came in response to the “systematic racial bias in our society” as part of an effort to focus on “social justice for our black and other marginalized communities.”

A group called Newberg Equity in Education (NEEd) launched a private Facebook group in July 2020 that said it “advocates for inclusion and equity” in NPS, with membership “limited to those with an interest in NPS and who are committed to anti-racism and pro-equity action.”

Critical Race Theory (CRT) holds that America is fundamentally racist, yet it teaches people to view every social interaction and person in terms of race. Its adherents pursue “antiracism” through the end of merit, objective truth and the adoption of race-based policies.

The NEEd group created “The Antiracism Family Book Club” in NPS schools, where books such as “Stamped,” by Ibram X. Kendi, were promoted, the Daily Wire reported.

Kendi, a prominent proponent of CRT and anti-racism, has said he believes “There is no such thing as a nonracist or race-neutral policy. Every policy in every institution in every community in every nation is producing or sustaining either racial inequity or equity between racial groups.”

Parents, who disapproved of the politically charged environment at NPS, ran against liberal school board members to overturn the progressive majority.

But, groups such as NEEd, the Yamhill County Democrats and Progressive Yamhill began to target board members once they were elected through the creation of a PAC as part of a recall effort to unseat Dave Brown and Brian Shannon, the Daily Wire reported. Rumors reportedly circulated that Brown and Shannon were getting divorced after cheating on their spouses, leading to backlash from community members and lost friendships.

In August 2021, the four conservative-leaning board members introduced the resolution that prohibited political symbols in schools called “Staff Participation in Political Activities.”

“No district employee shall, while acting within the scope of their employment, either during school hours, or inside their physical area of responsibility at a school (such as a classroom, meeting room, desk area) hang, post, erect, or otherwise display (hereafter “display”) any posters, signs, flags, banners, pictures or other digital or physical image that depicts support or opposition relating to a political, quasipolitical, or controversial topic,” the resolution said, the Daily Wire reported.

But, NPS Superintendent Joe Morelock did not enforce the ban even after NPS attorney Lisa Freiley told him the resolution “most likely will withstand a constitutional challenge,” according to an email obtained by the Daily Wire.

One NPS teacher, Gail Grobey, said she removed the American flag from her classroom and called it “terrifying” that school board member Trevor DeHart appeared on virtual meetings with an American flag behind him. A parent reportedly told the Daily Wire that the same teacher made students pledge allegiance to the pride flag.

“There is a flag in my room hanging on the wall as Oregon law dictates,” Grobey told the Daily Wire. “I do not have a pride flag, or any flag of any other sort in my room. If you would consider that the people informing you have NEVER been in my classroom, this ‘conversation’ would be moot.”

Other teachers also removed American flags from their classrooms, according to pictures obtained by the Daily Wire. In November 2021, the school board reportedly voted to remove Superintendent Morelock for refusing to enforce the resolution that bans political symbols in NPS schools. (RELATED: State Superintendent Says She Won’t Approve Curriculum That Instructs Disabled Preschoolers To ‘Deconstruct Whiteness’)

The school board members who fought back are also facing three lawsuits against the Newberg Education Association, the American Civil Liberties Union (ACLU) of Oregon and Private Citizens of Newberg over the political symbol resolution and an allegation that they violated public meeting laws for seeking private legal counsel, the Daily Wire reported.

The same board members have also had their personal property vandalized and have received “calls and text messages that are harassing in nature.  . . from all over the United States,” the Daily Wire reported.

School board member and freelance artist Renee Powell had her art removed from local businesses after she was called a “white supremacist” and “racist” by community members, the Daily Wire reported.

Shannon was terminated by his employer after people started calling the customer service line advocating for the company to fire him. “They have harassed my family,” Shannon told the Daily Wire. “They’ve done things that are just simply beyond the pale of what should be done in political discourse. They literally tried to break up my marriage.”

“If you’re willing to target a person’s livelihood and try to deprive their children of food and shelter, there’s not a whole lot you’re willing not to do in service of your ideology,” he said.

NPS did not respond to the Daily Caller News Foundation’s request for comment.