The Senate late Wednesday rejected a Democratic effort to alter the filibuster in order to pass their long-sought voting bills over unanimous Republican opposition, capping one of the most consequential days in the history of the chamber.

The vote failed 48-52 after Democratic Sens. Joe Manchin and Kyrsten Sinema voted as they said they would for months, joining a unanimous Republican caucus in opposition and denying their party the necessary support for the change to take effect. The change, had it been adopted, would have established a “talking filibuster” pertaining to the voting bills only, allowing any senator to speak for or against them for as long as they wanted but lowering the 60-vote threshold for passage to a simple majority.

“Strom Thurmond would have loved this filibuster,” King added, invoking the late segregationist senator who set the record for the longest filibuster speech ever while speaking against the 1957 Civil Rights Act. (RELATED: Democrats Double-Down On Sure-To-Fail Strategy To Pass Voting Bills) 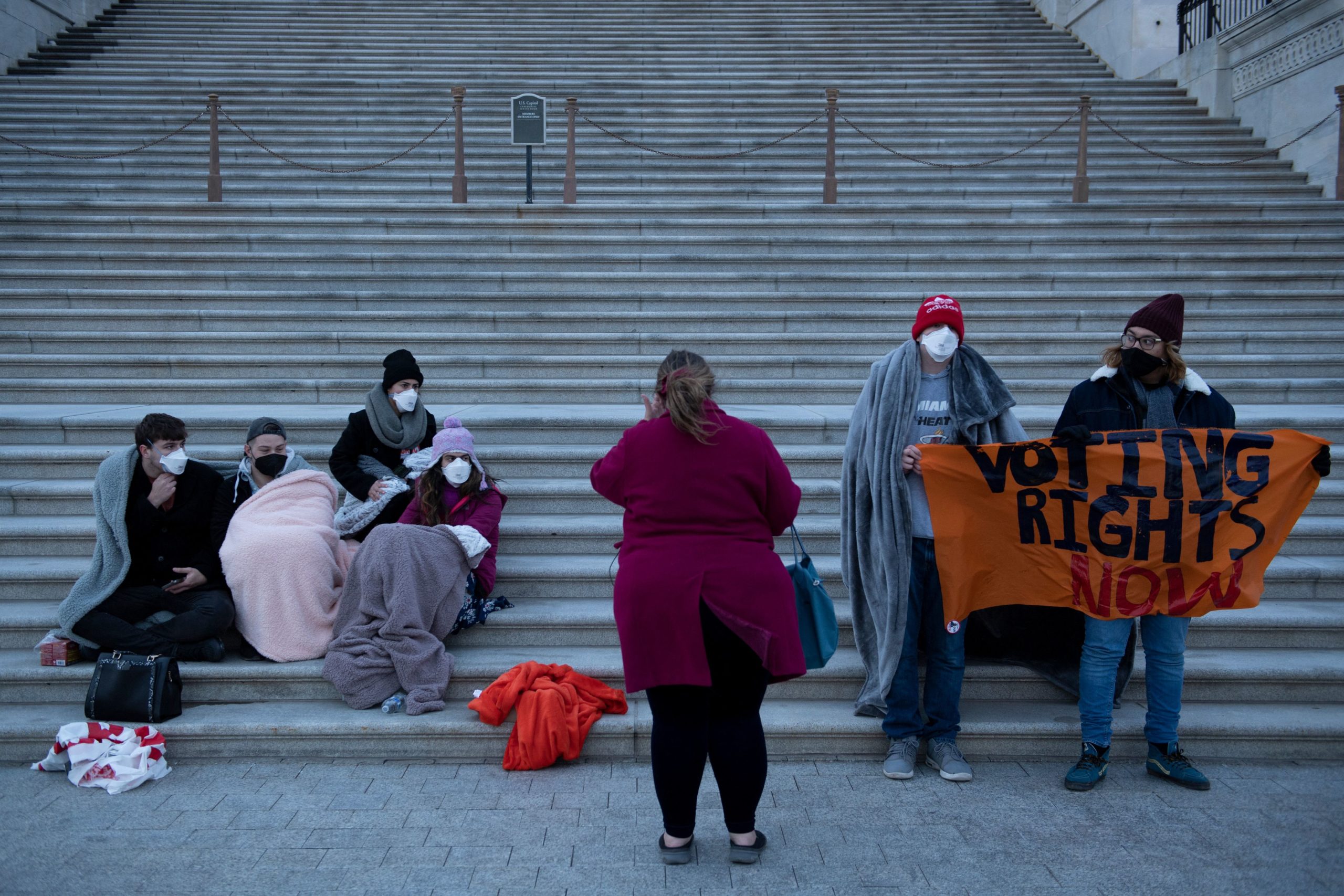 Democrats’ attempt to change Senate rules concluded a marathon day of debating in the chamber that saw nearly half of the body speak either for the John Lewis Voting Rights Reauthorization Act and the Freedom to Vote Act, the twin bills that passed the House Thursday with a quirk that prevented Senate Republicans from blocking debate on them as they had in the past. (RELATED: House Passes Two Democratic Voting Bills – With A Quirk That Allows Them To Skirt One Filibuster Vote)

“For those who believe bipartisanship is possible, we have proven them wrong,” Manchin said ahead of the vote. “Ending the filibuster would be the easy way out. I cannot support such a perilous course for this nation when elected leaders are sent to Washington to unite our country by putting politics and party aside.”

Democrats have said the bills are necessary to counter election reform laws that Republican state legislatures across the country have passed in the wake of the 2020 election that allegedly suppress people’s ability to vote. As a result, nearly all have endorsed altering the filibuster to ensure their passage even if done on a partisan basis.

“I share with many of you … a vision of the Senate that collaborates and negotiates the most important issue of our time,” Georgia Democratic Sen. Raphael Warnock said. “I believe in bipartisanship. But at what cost? Who is being asked to foot the bill for this bipartisanship and is liberty itself the cost?” (RELATED: ‘A Perilous Course For This Nation’: Manchin Breaks With Democrats, Reaffirms Support For The Filibuster Ahead Of Critical Vote) 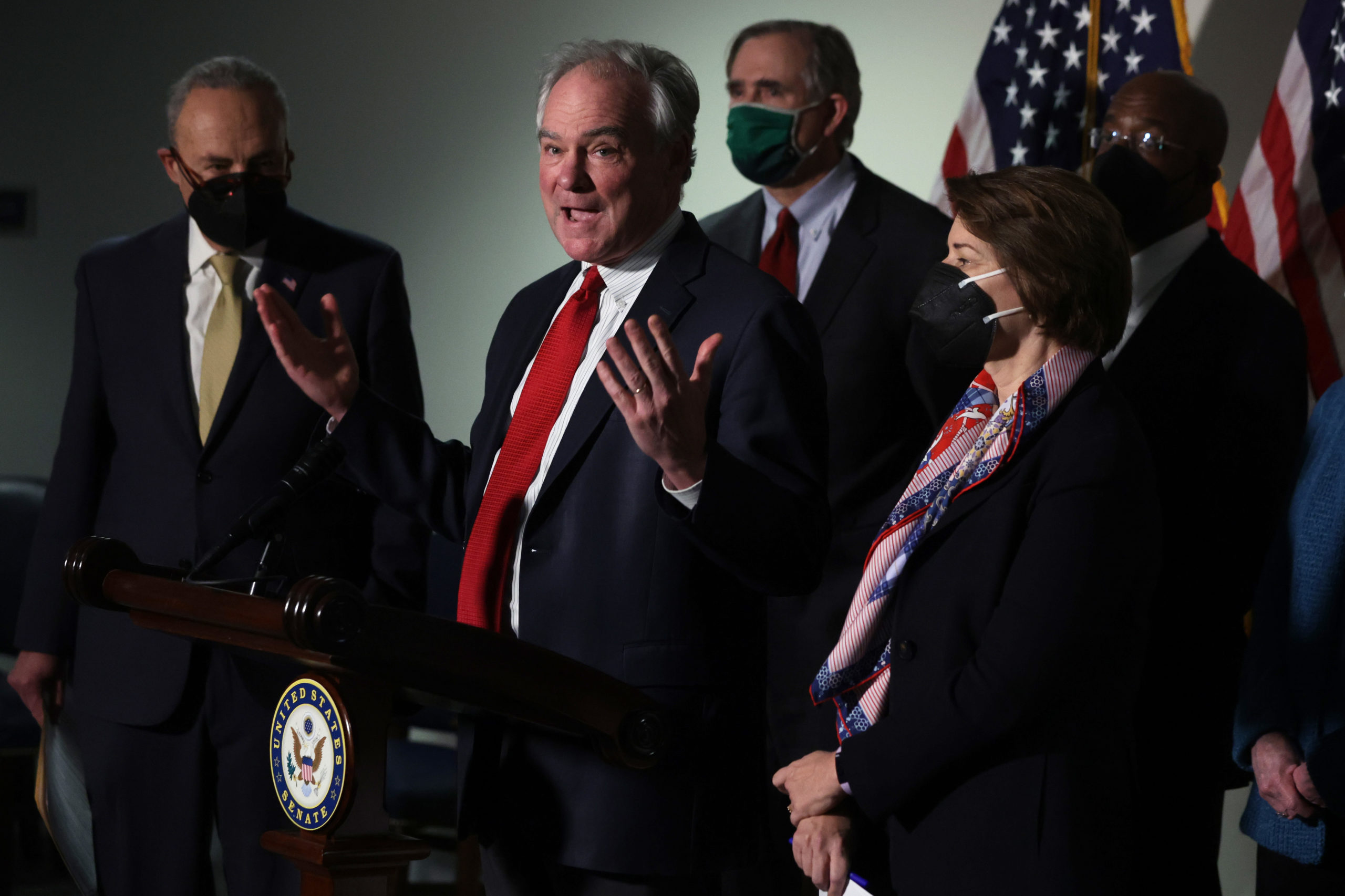 Sen. Tim Kaine speaks to the press about Wednesday’s votes and Democrats’ plan to push for a “talking” filibuster. (Alex Wong/Getty Images)

Republicans, however, have countered that the federal legislation, which sets uniform voting standards and outlaws partisan gerrymandering, will invite voter fraud and infringe on states’ rights to oversee their own elections.

“The president and his party will try to use fear and panic to smash the Senate, silence millions of Americans and seize control of our democracy,” Senate Minority Leader Mitch McConnell said Wednesday. (RELATED: McConnell Blasts ‘The Left’s Big Lie’ As Schumer Prepares Another Voting Bill Push)

McConnell said hours later that while the day was one of the most consequential in the history of the Senate, it really boiled down to a simple question: “Will it take 60 votes to pass massive changes or a simple majority to ram them through? That’s what’s at stake here.”

Though senators engaged in genuine debate throughout the day, most expressed disdain for how deliberation seemed to have faded from the world’s greatest deliberative body. Alaska Sen. Lisa Murkowski, the only Republican who backed the John Lewis voting bill, said Wednesday that the rhetoric surrounding voting has become very concerning.

“I was part of a very troubling conversation last evening,” she said. “It was shared depending on which side you’re on in this body today on this issue, you’re either a racist or a hypocrite. Really, is that where we are?”

Manchin echoed her hours later in his speech, criticizing the lack of bipartisanship as he has time and time again throughout his filibuster defenses.

“I don’t know what happened to the good old days,” he said, “but I can’t tell you they aren’t here now.”

Editor’s note: This article has been updated to reflect that the Senate rejected a filibuster change late Wednesday.