The co-founders of a national concerned parent organization told the Daily Caller that they noticed an uptick in “basic” Facebook posts being flagged for violating the platform’s community standards after the National Education Association (NEA) sent a letter to Facebook urging them to silence “radicalized parents.”

Moms 4 Liberty, a concerned parent organization that represents more than 70,000 parents nationwide, sent a letter to Facebook founder Mark Zuckerberg on Jan. 24 asking that the social media company “apply the same standards to [Moms 4 Liberty] as [they] apply to others.” Co-founders Tiffany Justice and Tina Descovich told the Daily Caller that 22 chapter pages were taken down in “recent weeks.”

Moms 4 Liberty operates 167 chapters nationwide and noticed that right before Christmas their posts were being flagged and removed at a higher rate than previous weeks. Justice told the Daily Caller that the Moms 4 Liberty national page was suspended from posting for 29 days.

Justice and Descovich told the Daily Caller that they noticed an uptick in violations after the NEA sent a letter on Oct. 8 to social media companies, including Facebook, asking them to censor parents who don’t agree with critical race theory-inspired lesson plans being taught in public schools.

NEA President Becky Pringle asked Facebook, TikTok, and Twitter, to stop online “trends” that “have helped create a culture of fear and violence with educators as targets,” according to Fox News. The letter asked social media giants to silence “propaganda” about topics that come from “a small but violent group of radicalized parents.” (RELATED: Nation’s Largest Teachers Union Wrote A Letter Calling On Social Media Companies To Restrict ‘Propaganda’ About Critical Race Theory)

Moms 4 Liberty’s letter to Zuckerberg insists that Facebook staff are acting as “enforcements agent[s]” on the NEA’s behalf.

“In an era where ‘parental rights’ have been slandered as a dog whistle for ‘radical extremism,’ the NEA’s intent seems clear. They want to use any tool at their disposal to push parents out of education. And, unfortunately, it appears that your staff has determined to act as an enforcement agent on their behalf,” the letter reads.

Justice and Descovich’s letter alleges that Moms 4 Liberty chapter groups were issued notifications of “communication violations” and were “disabled for posting basic information about local governments operations such as school board meeting times, or questions about student textbooks.”

Several Facebook posts reviewed by the Daily Caller verify the organization’s allegations. One flagged post read, “Are you ready to run for school board?” and another parent was flagged for asking where she could locate a school district’s curriculum.

“Does anyone know what curriculum is being used by AACPS? I just sent an email to the superintendent asking for this information, but thought I would as [sic] here as well,” the post read. 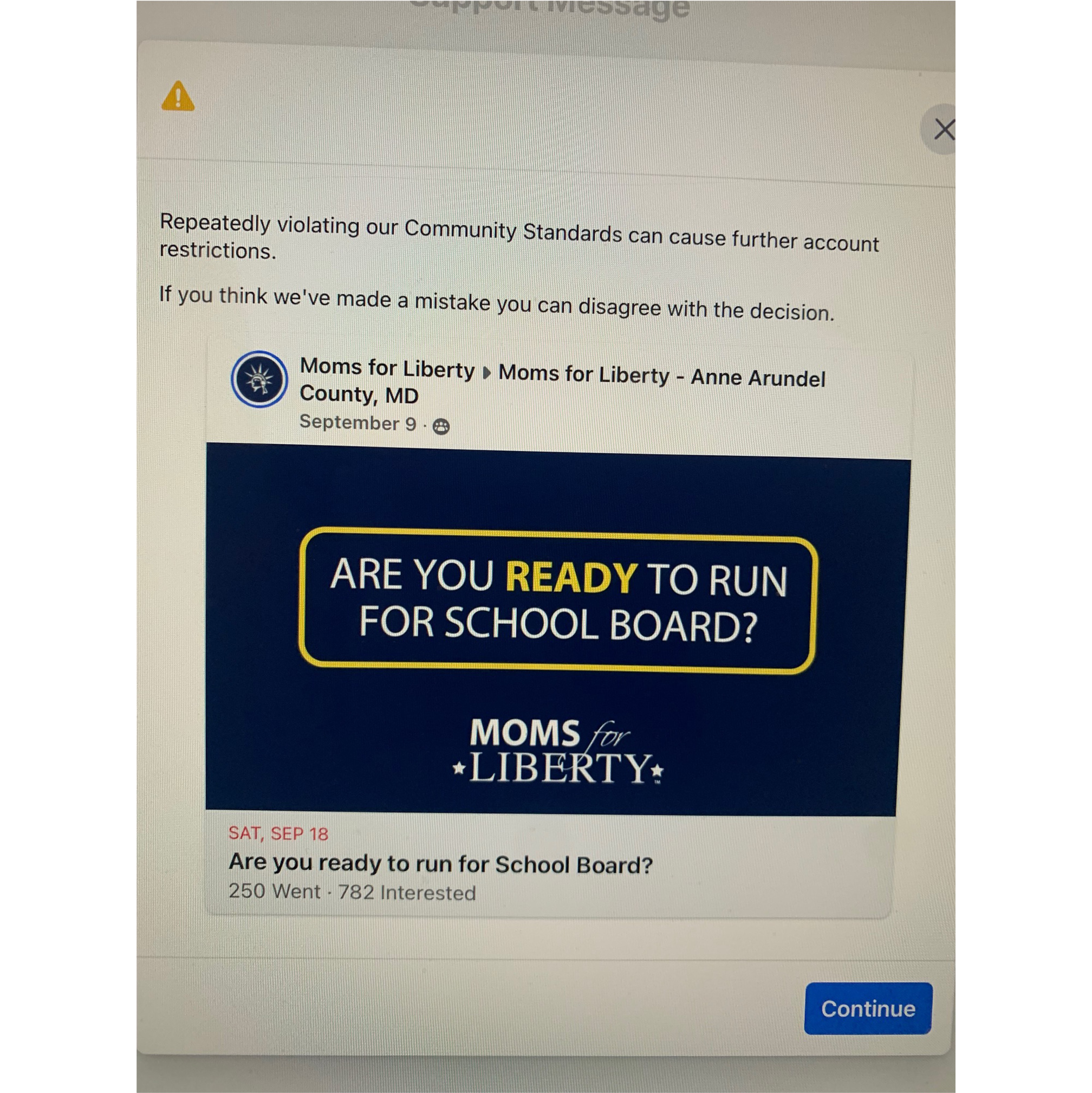 Other posts that were flagged include, “We had a great 2nd meeting,” and included pictures of several women donning Moms 4 Liberty t-shirts. Another post read, “Thank you to those who attended and spoke at tonight’s meeting! Great job!!” 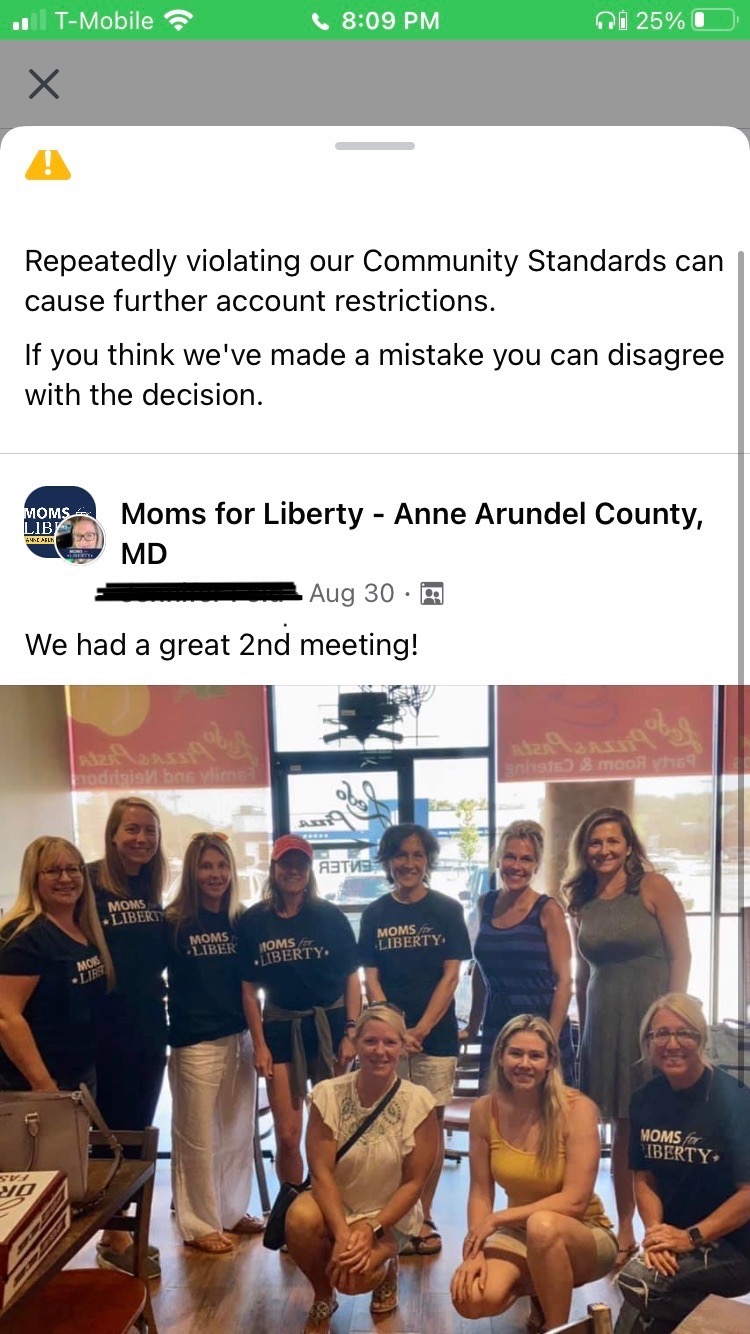 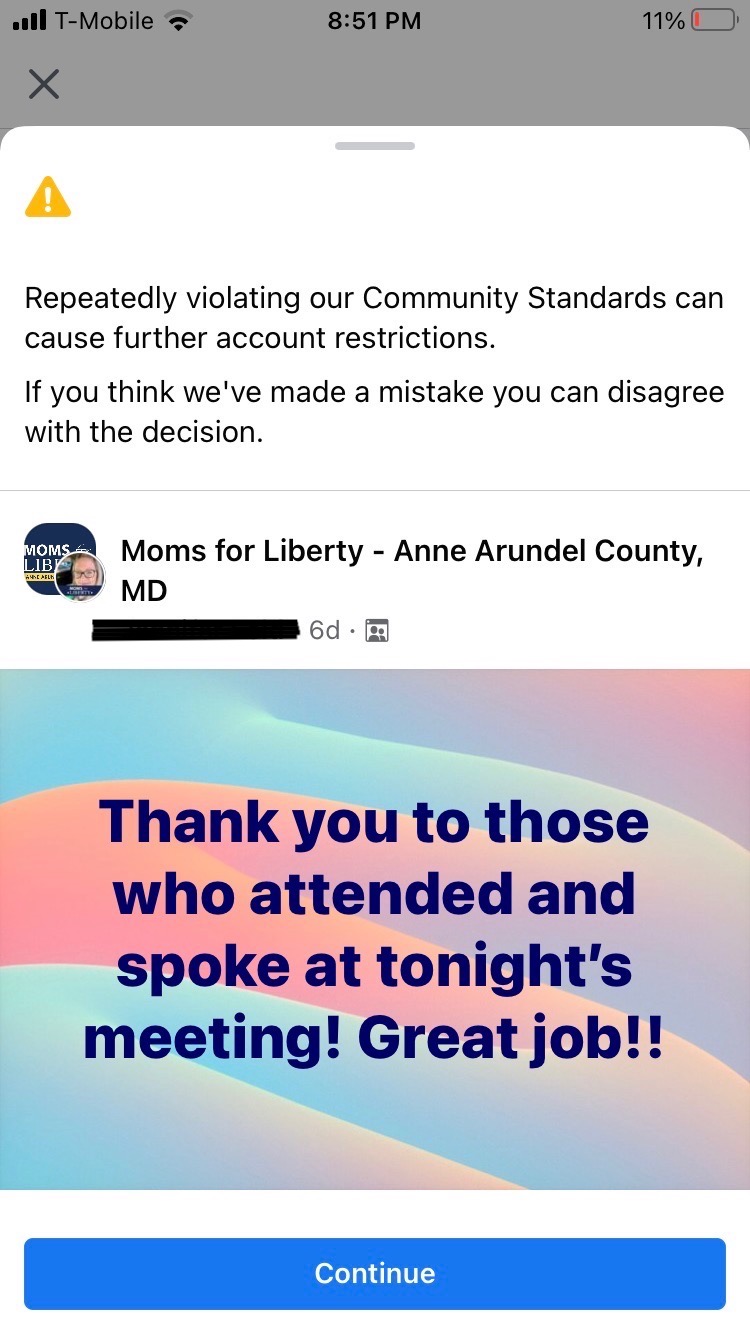 Justice and Descovich also allege that Facebook has provided them with no substantial reason for flagging or removing posts, according to their letter to Zuckerberg.

“Our groups have been shut down repeatedly,” the letter read. “Our admin accounts have been suspended and our National Page restricted for posting for ‘security reasons.’ We have not been provided with what these ‘security reasons’ might be, leaving us unable to address any concerns.”