Parents in a Dallas-area school district are required to sign a non-disclosure agreement (NDA) to participate in committee meetings that debate whether certain books are appropriate for school-aged children, according to documents obtained by the Daily Caller.

Keller Independent School District located north of Fort Worth, Texas, asked mother, Christine Molloy, to sign an NDA to participate in the district’s book challenge committee, according to emails from Jennifer Price, the district’s director of curriculum and instruction. Molloy was asked to serve on the committee reviewing the book “George” by Price herself, per a separate email obtained by the Daily Caller.

The initial NDA asked parents to keep information discussed in the meeting “confidential,” though failed to properly spell “confidential.” 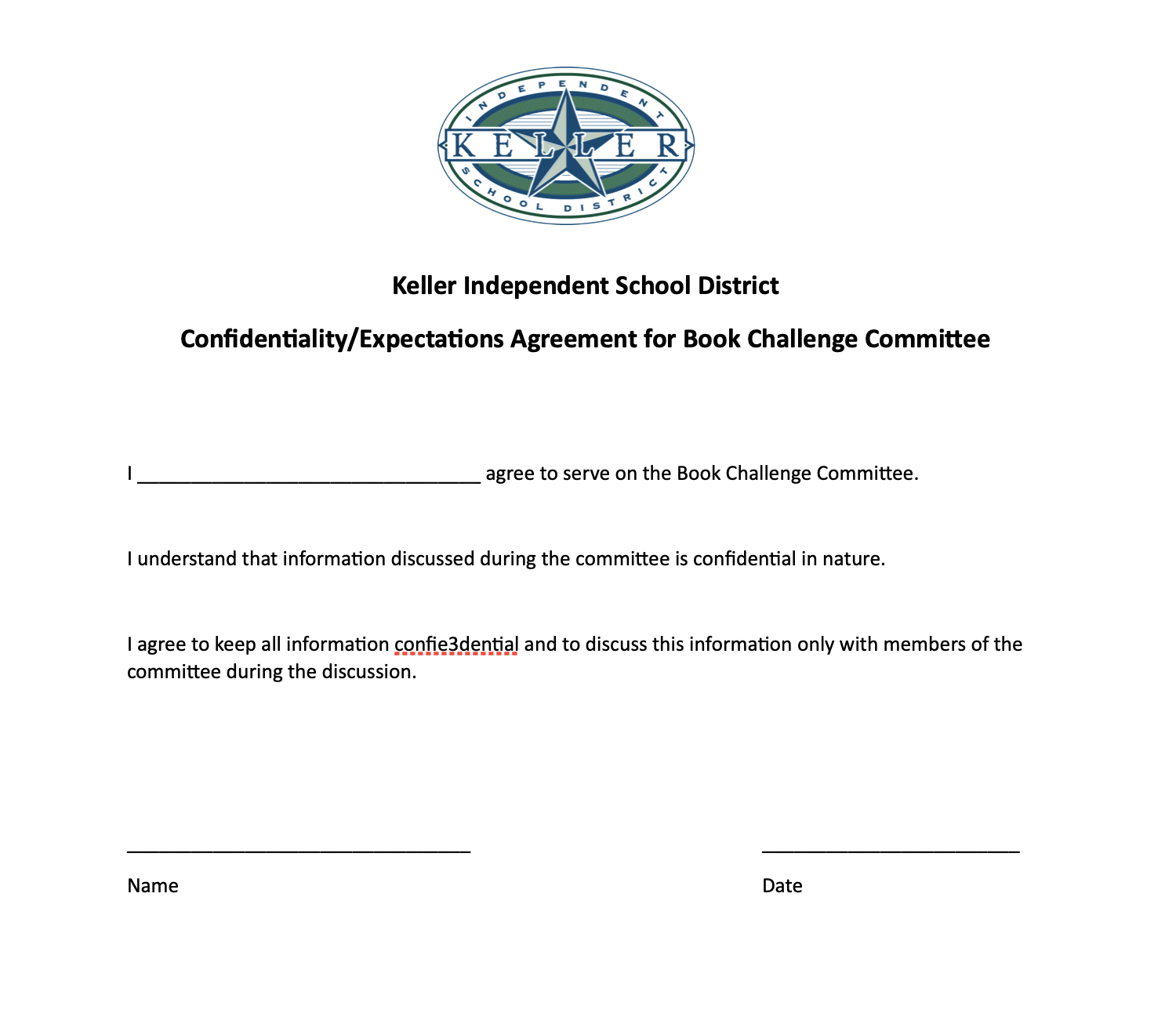 Molloy told the Daily Caller that she refused to sign the NDA because it was too broad. Price sent her an updated NDA aimed at keeping the participants’ identities confidential. Molloy said the committee is composed of two administrators, two librarians, two principals, and two parents, making the majority of the committee public school employees. 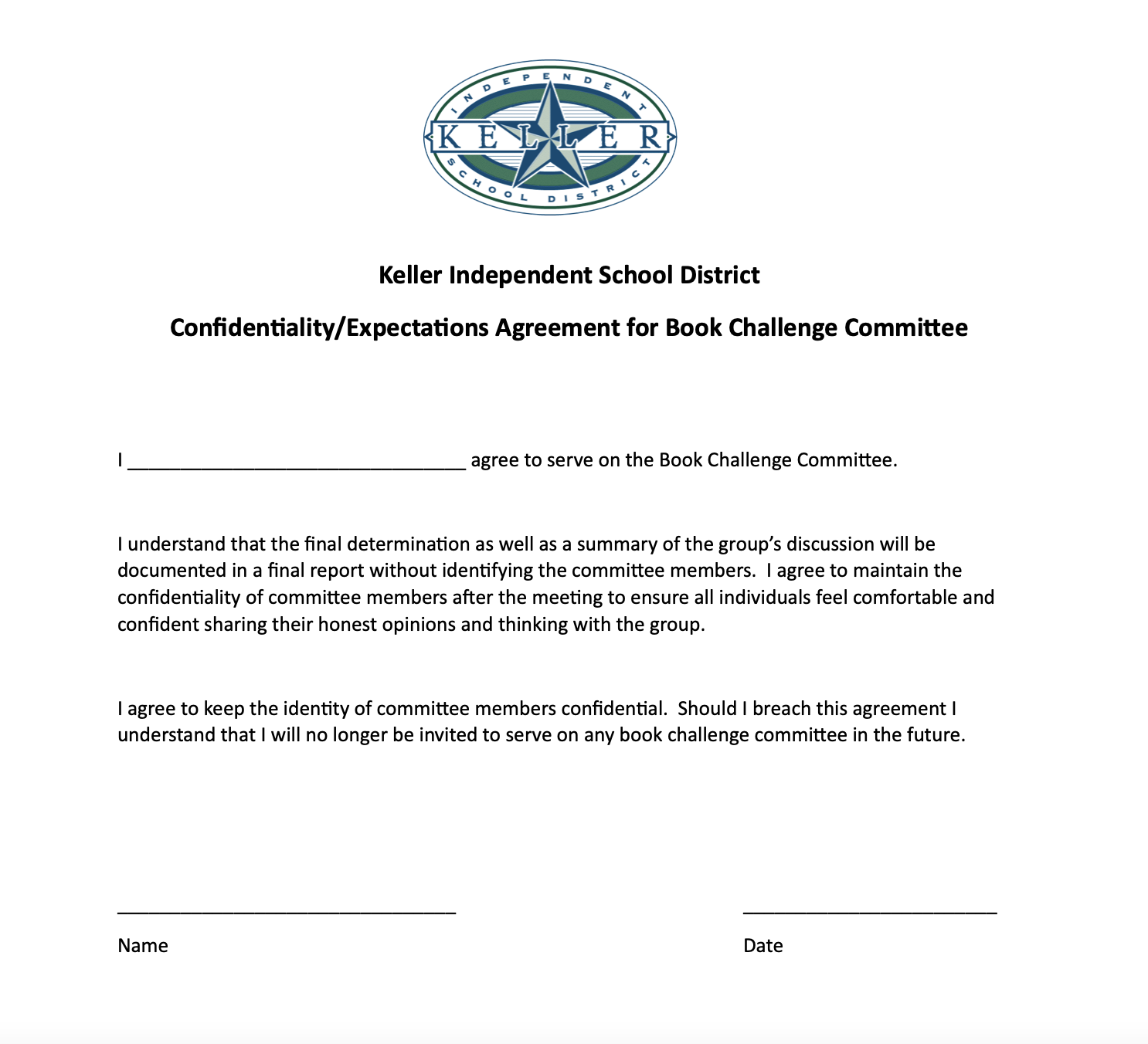 “We have a right to know who is making those education decisions for our children,” Molloy said. She found it odd that public administrators would want to hide their identity if they felt strongly that these books should remain in public libraries.

Price informed Molloy that refusal to sign the agreement would mean an alternative would be put on the committee to fill her spot, according to emails reviewed by the Daily Caller.

“Please bring your signed copy to the meeting,” Price said via email. “If you are not comfortable signing the agreement, please let me know, and I will find an alternative to serve in your place.”

Molloy told the Daily Caller that she did not respond to Price’s email and did not sign the NDA. She showed up to the Jan. 5 deliberation committee meeting and was asked to leave and informed that she could not sit in and observe the meeting.

Documents obtained by the Daily Caller uncovered that parents signed the initial NDA forms that force participants to remain silent about the deliberations for previous book review committee sessions. (RELATED: Parents Against Pornographic Books Speak Out At Board Meeting Despite Threats)

The committee that Molloy was slated to sit on “unanimously agreed to leave the book [“George”] in the classroom and campus libraries,” according to the district’s website. The committee also reviewed the book “All Boys Aren’t Blue” and “Gender Queer,” which some parents nationwide dub “pornographic.”

Molloy alleges that the district challenged the book “George,” and challenged other books because only the challenger can appeal the results of the committee’s findings. The district’s website claims that a parent filed a challenge against “George.”

Keller Independent School District said that its book challenge process and procedures are currently under investigation by the Texas Education Agency subjecting them to withhold records requests issued by the Office of the Texas Attorney General. The NDA is designed to “persevere and protect” the ongoing investigation and “citizens who volunteer to participate in the book review process,” the district said.

Molloy is considering taking legal action against the school district, according to a letter filed to the district. Her legal representation argued that not allowing the mother to observe the meeting is a violation of Texas’ Open Meeting Act.

According to a 2018 version of the Open Meeting Act, the legislation was designed for local governments to remain transparent to constituents. Molloy’s legal representative argued that KISD is subject to the law because book review committees are “pursuant to KISD Board Policy.”

KISD’s outside legal counselor Sarah Flournoy justified the NDA via emails obtained by the Daily Caller. Flournoy claimed that members of the book review committee “may reasonably fear scrutiny, social media posts and other outside forces – both hostile and supportive, suppressing voluntary participation.”