Throughout 2021, Democrats touted the expanded child tax credit as one of their signature and most effective policy achievements.

The credit, expanded in March as part of the American Rescue Plan, found support in both liberal and conservative circles, and was credited in its first few months with eliminating childhood poverty in the U.S. by almost 50%. Its success made it a foundational part of President Joe Biden’s $1.75 trillion domestic spending package, which Democrats embarked on advancing in summer 2021.

Now, however, despite the economic benefits the credit delivered to low and middle-income American families, the package is all but dead due to its inability to secure unanimous Democratic support in the Senate. And with the credit having lapsed in December in hopes that it would have been extended, families are grappling with the fact that the temporary budget cuts they made, and the consequences that resulted, may become permanent.

For Brian and Megan Curtis, a couple raising two young kids amid the challenges imposed by the pandemic, the expanded child tax credit’s lapse did not just mean that they would be forced to work greater hours to make ends meet.

The credit’s lapse, the couple told the Daily Caller News Foundation in an interview, touched nearly every facet of their lives, forcing them to cut back on spending, pull back from the business they are trying to launch and wrestle with the greater uncertainty that comes from the disappearance of hundreds of dollars per month that they had received throughout much of 2021.

“I’m going to the grocery store a lot less, and I’m trying to figure out how to make what we have stretch a little bit further,” Megan said, her voice occasionally competing with her kids in the background. “I’ve stopped buying things that were not frivolous purchases anyway, just putting off buying things that we normally would be.”

Megan, a hospice nurse, mentioned how they had stopped buying kitty litter and how both her kids were still using broken backpacks to carry their books around school. But the credit’s disappearance did much more than affect the daily lives of their kids and their cats; it altered how much they worked, how much time they spent with their kids and how they had planned a more stable future.

The couple started a telehealth business at the onset of the pandemic, and said how the credit had allowed them to devote more resources towards growing it without having to worry about enough food, their mortgage and the challenges that come from raising young kids. The business would have also allowed Megan, who is recovering from a heart condition and remains immunocompromised, to have a schedule that allowed her to spend more time at home, where her risk of catching the coronavirus is lower.

“One thing that Megan and I had talked about was the goal of not having her work as quickly as possible moving forward once the business started up,” Brian said. “But without that buffer coming in … we can’t predict the future and don’t know when she’ll be able to do that. We’ve had to put off her being able to focus more on her health and family as she continues to recover.” 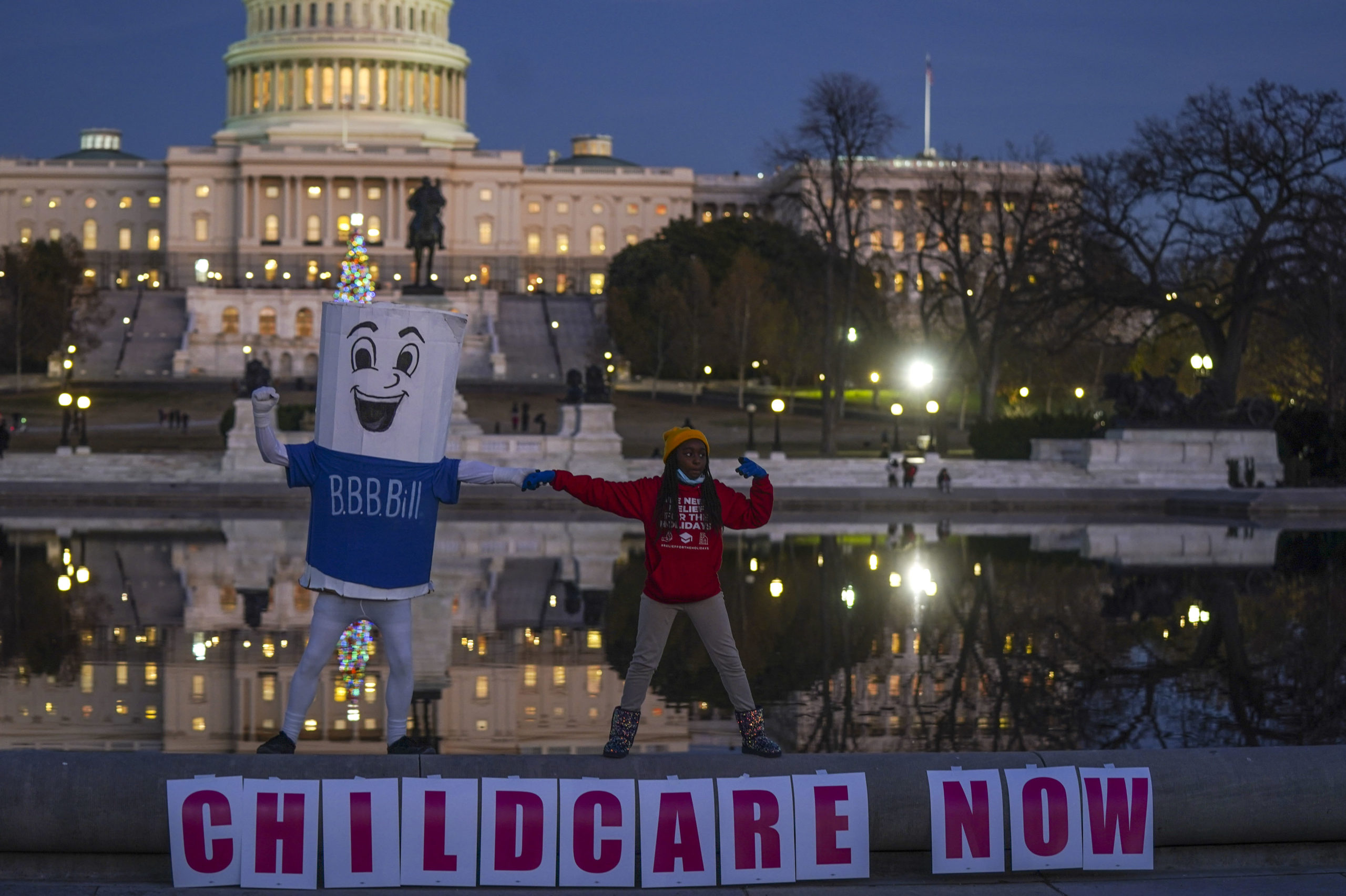 Advocates urged Congress to pass the Build Back Better Act before it ultimately collapsed due to lack of support. (Leigh Vogel/Getty Images)

Megan and Brian are far from alone; studies have shown that across the country families, especially those earning relatively little, had moved toward self-employment after receiving the credit, capitalizing on the extra money to improve their overall socioeconomic status. Studies also showed the payments allowed parents to work even more, even though they were not tied to any work requirement, benefiting stay-at-home parents, grandparents raising grandchildren and other Americans not working traditional 9-5 jobs. (RELATED: EXCLUSIVE: Child Tax Credit Is Driving Americans Toward Entrepreneurship, Has Little Effect On Workforce)

The positives have led many Democrats in the Senate to continue to push for the credit’s continuation, even as negotiations remain in infant stages. Five senators on Wednesday wrote to the White House directly, insisting that any resurrection of Build Back Better permanently extend the credits.

“The expanded CTC represents the biggest investment in American families and children in a generation,” Democratic Sens. Michael Bennet of Colorado, Sherrod Brown of Ohio, Cory Booker of New Jersey, Raphael Warnock of Georgia and Ron Wyden of Oregon wrote, saying it enabled families “to afford rent, put food on the table, and pay for child care so their parents and caregivers could stay in the workforce.”

But Senate Democrats are powerless to adopt any further extension without the support of West Virginia Democratic Sen. Joe Manchin, who balked at the overall package’s price tag amid surging inflation and supply chain shortages before explicitly coming out against it.

Manchin’s position only further inflamed tensions between him and the White House, with the latter essentially accusing him of lying during the negotiating process. And while tensions have now simmered, actual progress on the legislation remains nonexistent as Democrats prioritize passing a China competitiveness bill and keeping the government open at the onset of what will be a high-stakes election year. (RELATED: ‘They Know The Real Reason’: Manchin Fires Back At The White House After Gloves-Off Statement Criticizes His Opposition To BBB)

The West Virginia senator, however, has said that he is open to starting negotiations anew, but has continued to insist that the credit, if brought back, be targeted towards fewer Americans and that it come with a work requirement, putting him again at odds with the rest of his caucus.

Republicans, meanwhile, remain opposed to the expanded child tax credit as Democrats envision it, arguing that it is too expensive and that it discourages work, all but guaranteeing that its restoration as it was before would have to be done through a reconciliation bill that can pass with just a simple majority. And while some Republicans, like Utah Sen. Mitt Romney, have even offered their own plans in an effort to restore the credit, it remains unclear whether they would garner the Democratic support necessary to pass, much less support from others in the GOP.

Manchin’s hesitancy — and Republicans’ unanimous opposition to the credit as Democrats envision it — means that any renewal could be months away, if talk ever begins again at all.

“There’s two really big components that I feel strongly about that I’m not sure I can get in the package,” Biden told reporters in January. “One is the child care tax credit and the other is help for cost of community colleges.”

A Surprising, Yet Familiar Feeling

For many, the added pinch could not have come at a less ideal time. Many low and middle-income Americans had already struggled to make ends meet amid the pandemic and decades-high inflation that followed, and are now faced with even less disposable income as the holiday season set in and utility bills rose amid winter.

For Johnny Walls, a technician in West Virginia, the credit’s lapse was a reminder of how uncertain the coming months would be.

“We were lucky,” he said in an interview. “We got assistance with our electric bill this month. And now we’re kind of hoping as we head into spring we can reduce some bills.”

“But we already haven’t been using things that we don’t need,” he added. “Things have already been cut, and it’s kind of hard to cut from there.”

Walls, like the Curtis’, had put some of the child tax credit towards growing his own business. And while he said that the small graphic design business had grown throughout 2021, he now found himself torn over whether to cut back so he could earn more in the short term.

He is not an outlier, especially in West Virginia, a state that was already struggling with opioid use and a declining coal industry before the pandemic took hold. Walls described how families’ uncertainty over making ends meet had only grown, and how the sense of hope that a deal extending the credit had all but been extinguished.

“I think a lot of people were really hoping that when January 15 rolled around that they money would somehow be there,” Walls said. “We got our hopes up. People thought, ‘oh, maybe there will be two in February.’ Now there’s probably not going to be one in March or April or May.” (RELATED: In West Virginia, The Enhanced Child Tax Credit’s Lapse Cuts Deep) 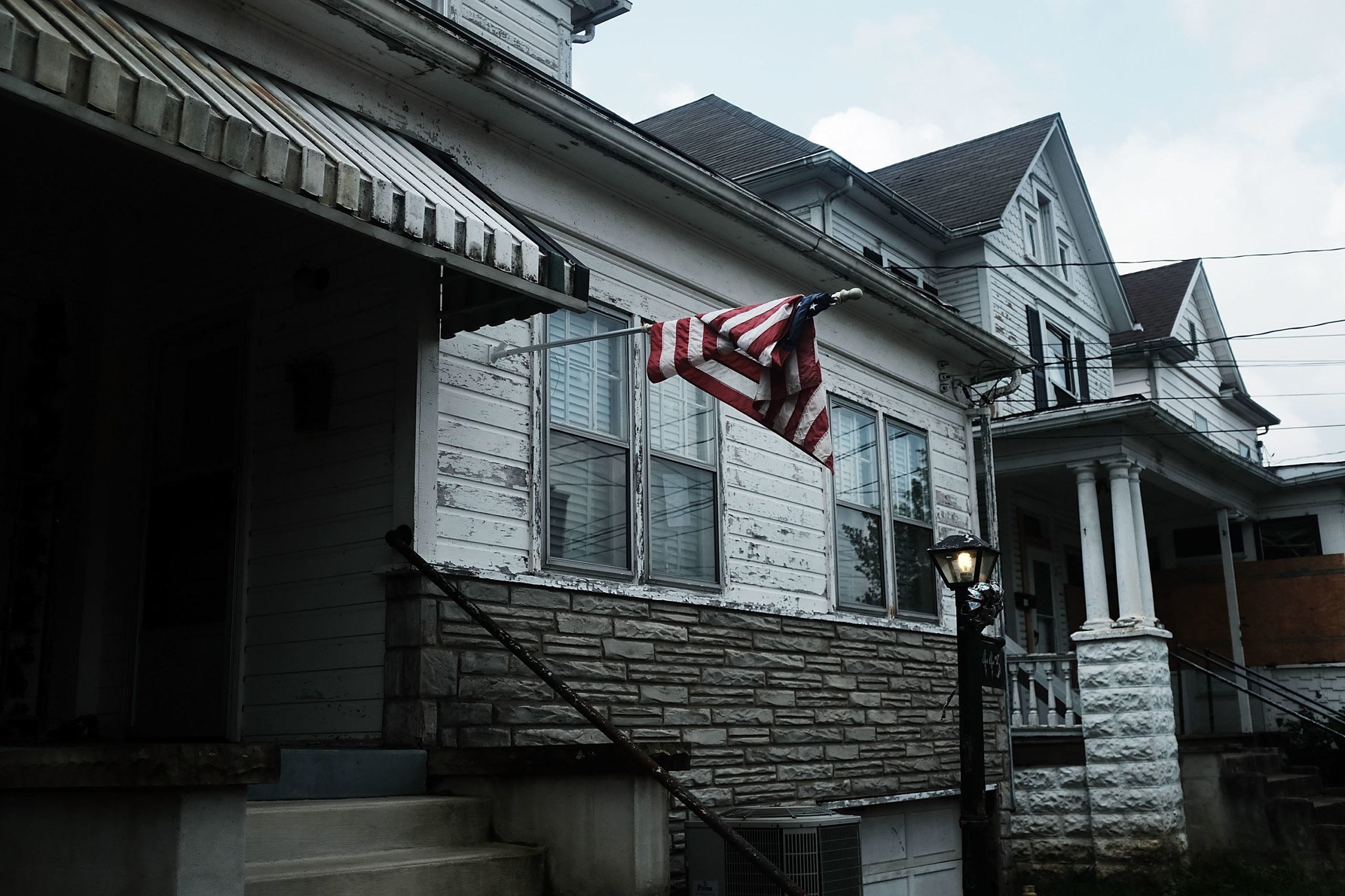 An American flag hangs in Clarksburg, West Virginia. The state, one of the poorest in the nation, had disproportionately benefited from the expanded credit. (Spencer Platt/Getty Images)

Blame To Go Around

For many receiving the credit, its lapse was not just the latest instance of abandonment from a federal government that had already seemed to have left working Americans behind, but a clear indication that aid that countless politicians had promised was likely not coming.

“Manchin’s response was especially tone deaf to me,” Russell Toll, a veteran who used the credit to launch a non-profit to help treat fellow soldiers with PTSD, said in an interview. “Letting it lapse because some Americans don’t need it as desperately as others is tantamount to refusing to throw life preservers to those treading water because some are stronger swimmers than others.” (RELATED: Conservative Support For A Pro-Family Tax Credit Finds Little Love Among Congressional Republicans)

Toll said he was saddened at Congress’ inability to come together and extend a program that had shown to be so effective in helping millions of Americans, and that many of his fellow veterans – also recipients of the credit – were dismayed as well.

“I have fellow vets I served with calling me and saying they’re right on the edge of giving up and it’s exhausting convincing them to hang on,” Toll said, describing how the credit’s lapse, coupled with the renewed pandemic fears and restrictive policies, including the potential shuttering of his kids’ school, had proven demoralizing for many in his community.

Toll’s sentiment extended to the Curtis’ as well, who blamed Congress for “trying their hardest not to work together.”

“It seems like lawmakers focus on short-term incentives and rewards for their next cycle instead of taking a longer view of what’s best for our politics, what’s best for our communities and what’s best for our families,” Brian Curtis said. “It’s shocking because when you talk about something like basic income so people can meet their needs, it really seems like that ought to be the bullseye for working. But apparently it’s not.”