Democratic Massachusetts Sen. Elizabeth Warren, Independent Vermont Sen. Bernie Sanders and Democratic California Rep. Ro Khanna all spent more than $500 on Uber and Lyft rides in 2021, despite their stated beliefs that the companies mistreat their employees and that they take advantage of loopholes in federal labor laws. All three members are co-sponsors of the Protecting the Right to Organize (PRO) Act, which would eliminate secret ballots for union elections and eliminate right to work laws. The bill is supported by major labor unions and opposed by business and freelance worker organizations. (RELATED: House Passes Partisan Pro-Union Bill Decried By Business Groups. Here’s What’s In It)

Both Sanders and Warren made opposition to companies that employ independent contractors, such as ride-sharing platforms like Uber and Lyft, key planks in their 2020 presidential platforms. Sanders claimed that the independent contractor designation allows companies to “ruthlessly exploit workers,” and promised to prevent them from doing so if he was elected president. Warren called out Uber and Lyft specifically on her website, while arguing that “millions of workers” have their rights “denied” by such a classification.

Warren spoke at a union rally in September in opposition to a Massachusetts ballot measure that would allow companies to designate app-based drivers as independent contractors.

“That’s great for big tech, great for big corporations, and a disaster for American workers who are trying to pay the rent and keep food on the table,” she said at the time.

Despite her opposition to ride-sharing companies, Warren spent $556.25 on Uber rides in 2021, filings updated with the FEC on Monday reveal. Similarly, Sanders spent $847.85 on Uber and Lyft rides in 2021, according to his filings. (RELATED: Rep. Cori Bush Wants To ‘Defund The Police’ But Spent Taxpayer Money On Private Security For Herself)

Neither Warren nor Sanders responded to the Daily Caller’s request for comment on the matter.

In addition to co-sponsoring the PRO Act, Khanna campaigned extensively against California’s Proposition 22, which gives ride-share services like Uber and Lyft an exemption from the state’s anti-freelancing law, Assembly Bill 5. That law, passed in 2019, limits the number of assignments freelance employees can accept in one year. It was accompanied by mass layoffs from California-based media outlets, such as Vox. 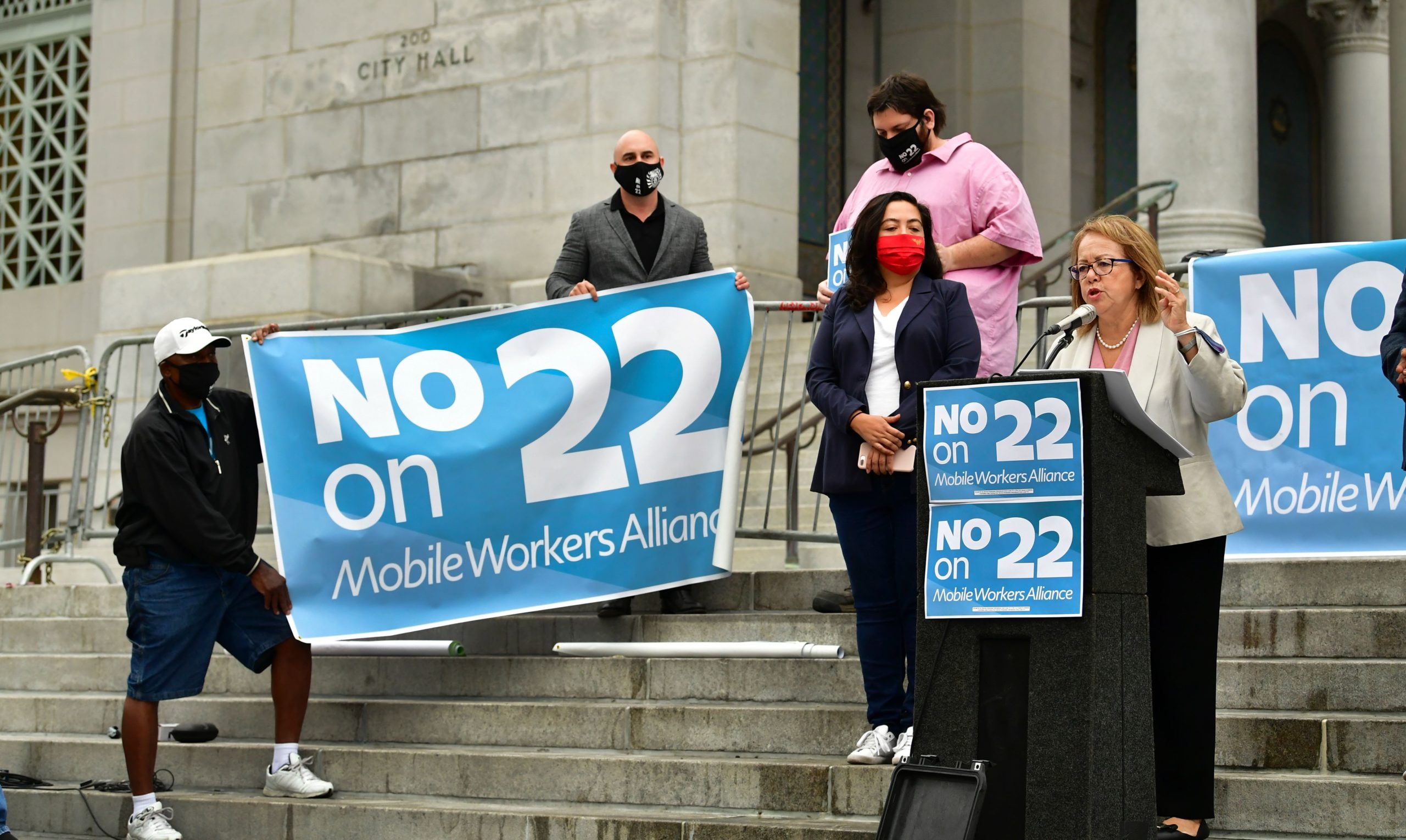 California State Senator Maria Elena Durazo speaks on the steps of City Hall in Los Angeles on October 22, 2020 where elected leaders hold a conference urging voters to reject on the November 3 election, Proposition 22, that would classify app-based drivers as independent contractors and not employees or agents. (Photo by Frederic J. BROWN / AFP) (Photo by FREDERIC J. BROWN/AFP via Getty Images)

Khanna, however, defended AB5, and opposed Proposition 22, which passed with the support of over 58% of Californians. Anti-freelance legislation allows contractors to receive “the same benefits and workplace protections as everyone else,” Khanna has repeatedly said.

“Unionization has allowed workers to claim their part of the economy,” he told CNBC in 2019. “You have a company come in that’s worth $50 billion, where the founder has cashed out for $1 billion, and said that they can’t afford to pay workers $15 and provide them with overtime benefits and healthcare benefits.”

Despite his public criticism, Khanna $953.61 on Lyft rides in 2021, according to his FEC filings. All of his rides were in California, according to the filings, where the ride-sharing company had nearly shut down over the anti-freelance law.

Khanna did not respond to the Daily Caller’s request for comment.