“Mayor Adams, you and I agree: The answer is not to abandon our streets,” Biden told the group, who met at the NYPD headquarters. “The answer is not to defund the police. It’s to give you the tools, the training, the funding to be partners, to be protectors.”

Biden praised NYPD officers officers Jason Rivera and Wilbert Mora, who died last month in Harlem. The president pointed out that a stolen Glock with 40 rounds was used during the murders.

Biden noted that he spoke with the family members of the fallen officers prior to his trip.

“As the President mentioned in his remarks, ahead of today’s visit to New York City, he spoke with family members of NYPD Officers Wilbert Mora and Jason Rivera to express his heartfelt condolences for their loss,” White House press secretary Jen Psaki later said in a statement.

“The President also spoke last night with NYPD Commissioner Sewell to convey his support for the work her department is doing to combat gun crime and strengthen ties with the communities they serve and protect. Before today’s Gun Violence Strategies Partnership meeting at One Police Plaza, the President met with NYPD Officer Sumit Sulan,” Psaki added. 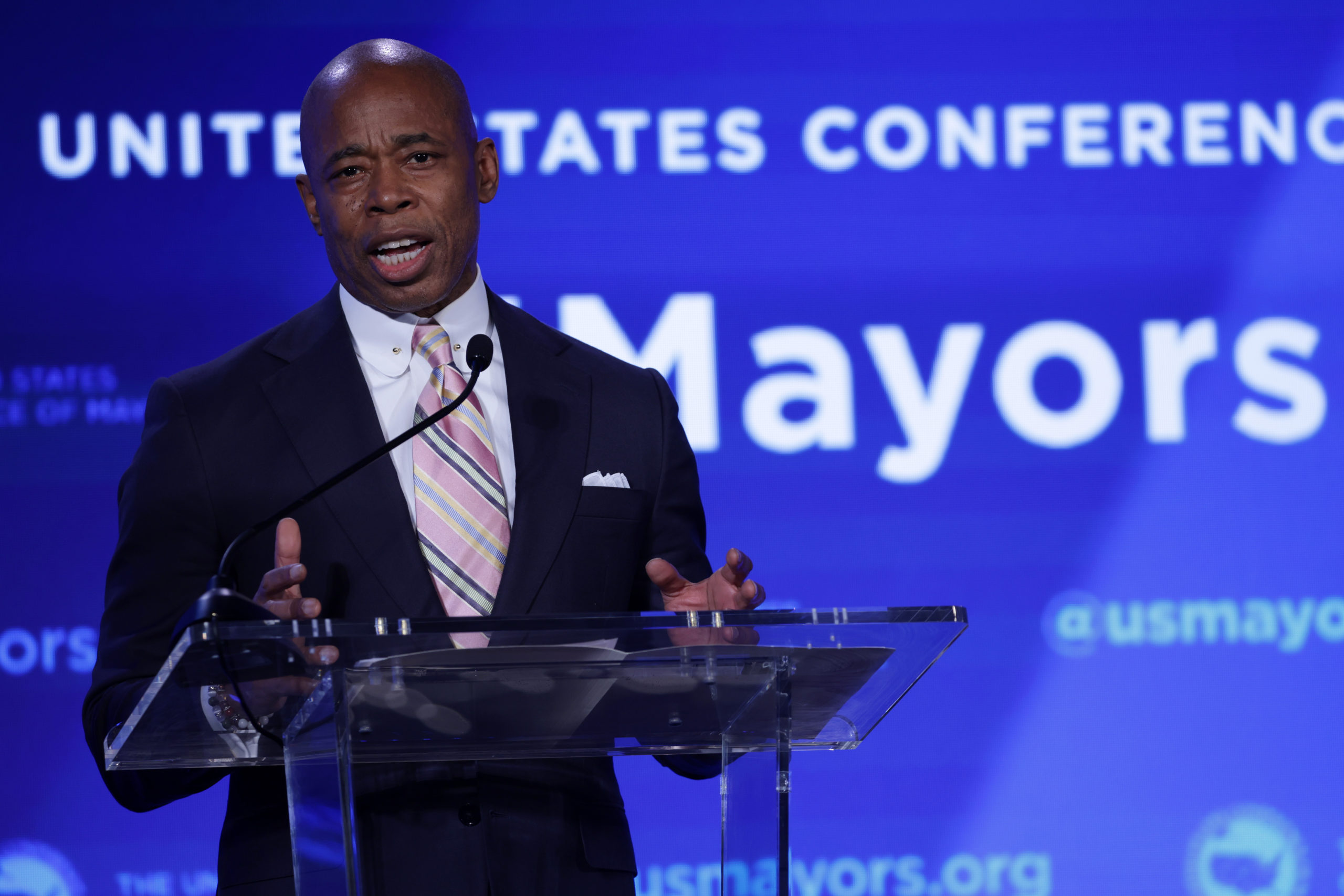 WASHINGTON, DC – JANUARY 20: New York City Mayor Eric Adams speaks during the 90th Winter Meeting of USCM on January 20, 2022 in Washington, DC. The U.S. Conference of Mayors held its annual winter meeting to hear from Congressional leaders, Biden Administration officials, and other experts to discuss the best ways to achieve the goals of America’s cities in 2022. (Photo by Alex Wong/Getty Images)

During his trip, Biden reaffirmed his push for banning semi-automatic rifles with certain cosmetic features, describing the stolen Glock with 40 rounds as “a weapon of war.” (RELATED: Biden Calls America’s Most Popular Handgun A Weapon Of War During Gun Control Speech)

The president also stopped at a New York public school to talk about community violence intervention programs with local leaders. Garland, Adams and Hochul attended this event as well, according to the White House.

Biden’s visit to New York City coincides with a rise in shootings in the city, according to the Wall Street Journal. Shootings are up 32% for 2022 compared to the same period of time in 2021, NYPD data indicates, and five NYC police officers were shot in January alone.

The president’s trip also coincides with a general rise in crime in many major cities. The White House has consistently focused on guns in its efforts to combat the rise in crime. (RELATED: Psaki Dodges Question On Soaring Crime Rates, Blames ‘Guns Problem’)

Biden brought up the Department of Justice’s recently-announced national ghost gun enforcement initiative Thursday. The initiative aims to crack down on “ghost guns,” which can be loosely described as guns that people can either partially or fully manufacture themselves.

The president pushed for Congress to increase funding for community policing and community violence intervention programs during the trip, as well.

“I called on the Congress to pass a budget later this year that provides cities, like New York and others, with an additional $300 million for community policing, you know, where the police interact with the community, get to know the community, build trust in the community,” Biden said.

“I’ve asked the Congress to provide $200 million to invest in community violence intervention programs as well – they work; they work – where community members with credibility work directly with people that are most likely to commit crimes or be victims of gun crimes.  And they work,” he continued during his first event in the city.