The House of Representatives passed a bill to bolster American competitiveness against China on a near party-line vote Friday, but the legislation may not pass the Senate, multiple sources reported.

The bill, titled the America COMPETES Act, was the House’s version of a bipartisan bill that passed the Senate in June 2021 meant to boost domestic manufacturing and semiconductor chip production and ease supply chain shortages. But unlike the Senate’s legislation, which passed with the support of 18 Republicans, the House bill passed with only Illinois Republican Rep. Adam Kinzinger voting in favor, while Florida Democratic Rep. Stephanie Murphy voted no.

Since the House version differs from the Senate’s, the two chambers will have to conference in order to resolve their differences and compromise on a bill that can pass with enough bipartisan support to secure 60 votes in the upper chamber.

“The America Competes Act will ensure that America is preeminent in manufacturing, innovation and economic strength, and can out-compete any nation,” House Speaker Nancy Pelosi said Friday ahead of the vote. 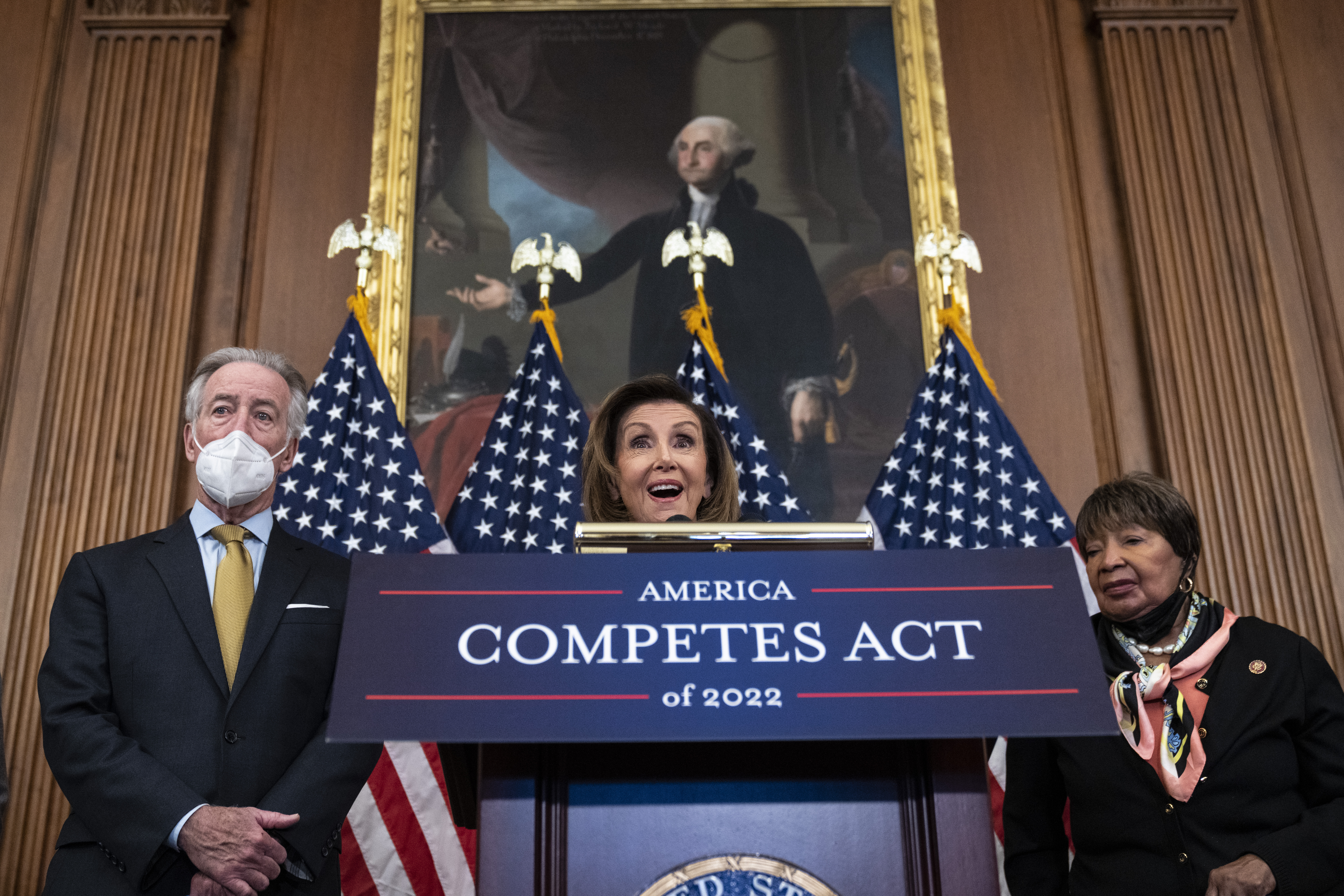 Reps. Richard Neal, Eddie Bernice Johnson and Speaker of the House Nancy Pelosi speak about the COMPETES Act at the Capitol on Friday.
(Drew Angerer/Getty Images)

The bill also took steps to sanction the Chinese Communist Party for its ongoing genocide against Uyghur Muslims in the northwest part of the country, and it would condemn the authoritarian government for its crackdown against Hong Kong and its residents’ once-promised freedoms. (RELATED: ‘Cold War Mentality’: China Doesn’t Like The Bipartisan Bill Bolstering American Competitiveness Against It)

Despite the bill’s passage, House Republicans slammed the bill throughout the week as it was brought to the floor and saw votes on hundreds of amendments. Most of the Republicans’ complaints centered around the bill’s omission of provisions to ensure that sensitive research is not conducted by adversarial foreign agents, provisions that passed on a bipartisan basis in the past, with Republicans arguing that the bill would do little do actually weaken the communist country. (RELATED: Republicans Staunchly Opposed To House Dems’ China Bill, Potentially Delaying Its Passage)

Republicans also railed against the climate provisions in the bill, warning that the legislation was cover for Democrats’ “far-left agenda.”

“While it contains some provisions supported by Republicans, Speaker Pelosi is holding these good ideas hostage by using this 3,000 page bill as a vehicle for the party’s far-left agenda,” said House Minority Leader Kevin McCarthy ahead of the vote. “Frankly, it’s too little, too late,” McCarthy said. “I bet you China laughs, just like they laugh at this bill.”

Some moderate House Democrats, including Murphy, also complained that party leadership transformed a bipartisan bill into a partisan package. Michigan Democratic Rep. Elissa Slotkin even voted against a procedural rule advancing the bill over her leadership’s actions.

“This was a shot across the bow to the Democratic leadership to make clear that they need to get serious about compromising with the Senate to get this bill signed into law,” Slotkin said Wednesday. “Passing a bill just through the House will do nothing to get microchips to the auto plants I represent.”