Britney Spears talked about her battle with depression and what she said her family put her through, then deleted the post.

In a lengthy Instagram post Thursday, the 40-year-old pop singer talked about how depression can keep a person from doing what’s needed to be “healthy.” (RELATED: Celebrities Speak Out In Defense Of Britney Spears Following Her Plea To End Conservatorship) 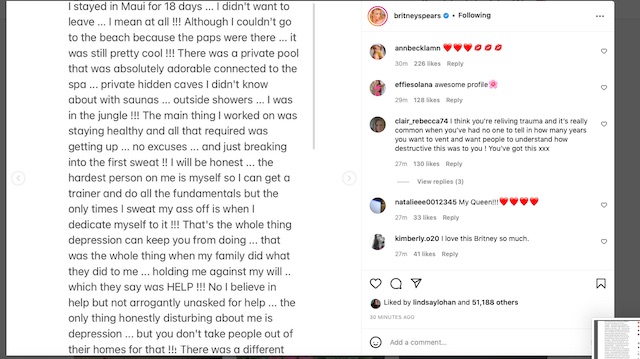 “That’s the whole thing depression can keep you from doing,” the superstar singer wrote. “That was the whole thing when my family did what they did to me … holding me against my will .. which they say was HELP!!!” (RELATED: Britney Spears’ Mom ‘Inserted Herself’ Into Daughter’s Life To Get Vegas Marriage Annulled, Lawyer Says)

“No I believe in help not arrogantly unasked for help,” she added. “The only thing honestly disturbing about me is depression … but you don’t take people out of their homes for that.”

The “Toxic” hitmaker wrote about how there was a “different nurse everyday looking at me when I changed.” And how she didn’t have a say “on absolutely anything.” 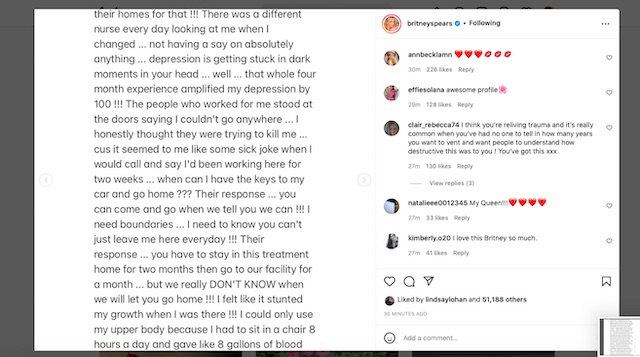 She said “depression is getting stuck in the dark moments in your head” and how “that whole four month experience amplified my depression by 100.” However, she didn’t give a time frame about when those four months were.

“The people who worked for me stood at the doors saying I couldn’t go anywhere,” Spears wrote. “I honestly thought they were trying to kill me … [Because] it seemed to me like some sick joke when I would call and say I’d been working here for two weeks … when can I have the keys to my car and go home?”

Spears wrote the response she got back was that she could “come and go when” they told her.

The singer also said she was told she had to stay in the “treatment home for two months” and would then go to a “facility” for a month. She said she was never told when she could go home and that she feels it “stunted my growth.” 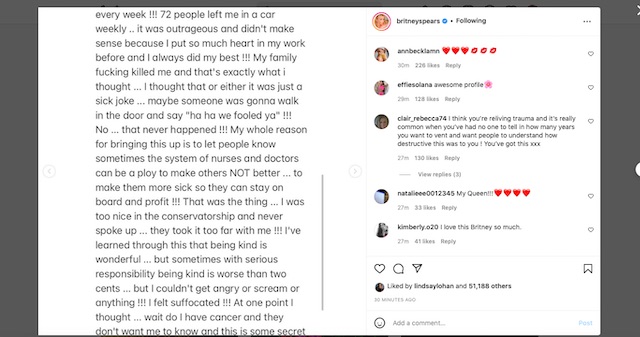 The “Gimme More” singer reiterated how she felt at any moment someone would come get her and tell her it was just a “sick joke,” but that never happened.

Spears later explained the reason for her post was to “let people know sometimes the system of nurses and doctors can be a ploy to make others NOT better” so they can “profit.” 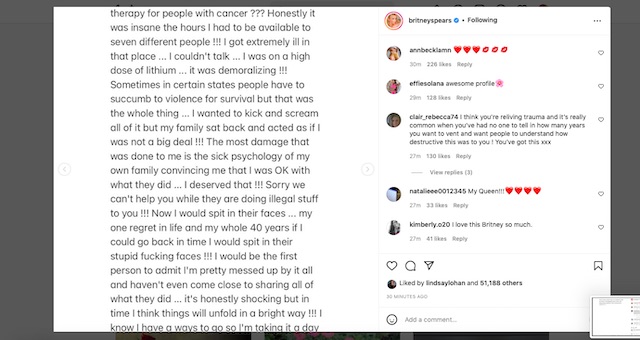 At one point, she repeated comments she made in court about being kept on a “high dose of lithium” and how it was “demoralizing.”

She concluded her post with another swipe at her family who convinced her that all of what was being done to her was okay. Spears said her one regret in her 40 years was that she didn’t “spit in their stupid fucking faces.”

The “Womanizer” hitmaker also admitted that she’s “pretty messed up by it all” and that she hasn’t even come close to “sharing all of what they did.”

In November 2021, Spears posted on social media about being thankful and feeling like being on “cloud 9” after a judge terminated her conservatorship she was under for 13 years.

Spears had been under conservatorship since 2008, which oversaw her and her estate after she went through a public spell of mental health issues.