Multiple events hosted by conservative groups have been flooded with fake registrations across the country, including one at an Ivy League school hosted by a prominent student organization that engages in activism for conservative causes.

The events were all promoted via Eventbrite, which describes itself as “a global self-service ticketing platform for live experiences that allows anyone to create, share, find and attend events that fuel their passions and enrich their lives” on its website.

However, for some conservative groups, a tsunami of spam registrations made accomplishing that difficult, and the difficulty was compounded by slow or non-existent responses from the company. In addition, the Daily Caller News Foundation found that it was easy to make a fake registration for events on Eventbrite, even if the email address was already linked to an Eventbrite account.

The targeted events included a Turning Point USA (TPUSA) event in New Hampshire, a candidate forum in Texas, a rally for constitutional carry in Georgia and a conservative gathering hosted by the Wisconsin Conservative Digest. Event organizers described the issues created by the tsunami of fake registrations in email and phone conservations with the Daily Caller News Foundation. The issues included confusion as it pertained to organizing their events and a loss of time trying to address the spam. (RELATED: Anti-Mandate Protest Turns Violent After Antifa Shows Up)

“We had over 6,000 registrations,” the Wisconsin Conservative Digest told the DCNF in an email when advised of a spam registration for a Feb. 19 conference, saying the attacks started as soon as the event was posted on Eventbrite. 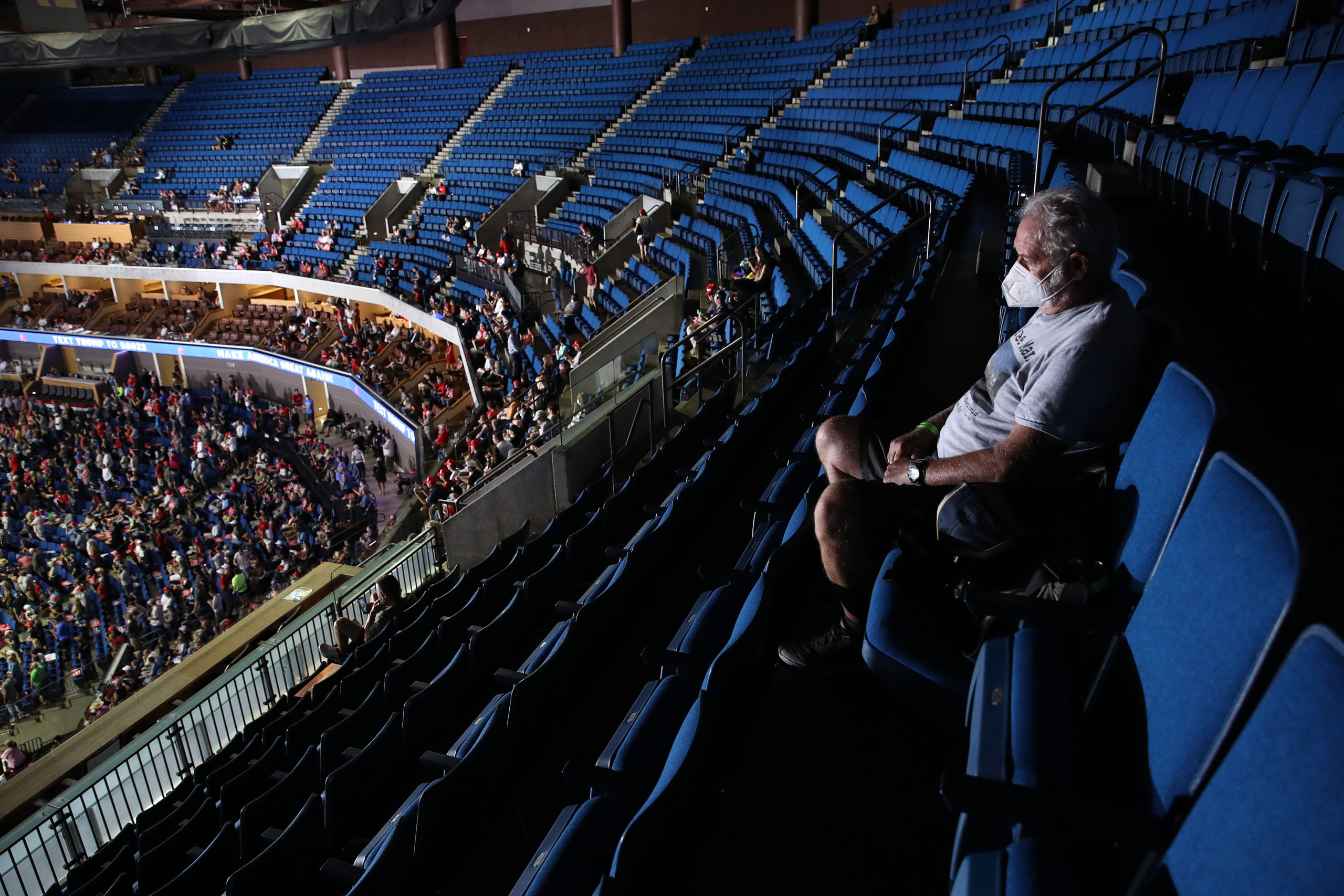 Mike Brooks sits in the upper seats ahead of a campaign rally for U.S. President Donald Trump at the BOK Center, June 20, 2020 in Tulsa, Oklahoma. (Photo by Win McNamee/Getty Images)

Bob Dohnal, the publisher of the Wisconsin Conservative Digest, described some of the issues caused by the fake registrations for his “all-volunteer” organization, including confusion about what resources were necessary for the conference, including tables, chairs and how much food to order. He told the DCNF it took 250 hours since early December “for planning the events: meetings, confirming speakers, venues, graphics, advertisements, emails and etc.”

“It has happen[ed] for other events but they were at tops 100-150 people so we didn’t care and the event was outdoors so it didn’t really matter,” Dohnal told the DCNF in an email. “But this time it was thousands, as many as 2,500 in one day.”

Dohnal told the DCNF that Eventbrite took measures to stop spam registrations, but could not address or remove the fake registrations.

“They responded within a week, not satisfactory for us given we were exploding in registrations,” Dohnal said when asked for details on Eventbrite’s response, telling the DCNF that they generally have 300-400 attendees at their conferences. “One issue I didn’t discuss is the confusion of how many people are actually attending our event. It’s impossible to determine what’s real and what’s not.”

“We can identify regulars, but we don’t know everyone who attend[s] our events,” Dohnal, who is retired, told the DCNF, adding that others who assisted had “day jobs in the private sector and in politics.”

The group noted that a similar flood of fake registrations was used against a Trump rally in Tulsa, Oklahoma, during the 2020 presidential campaign. Democratic Representative Alexandria Ocasio-Cortez celebrated the spamming on Twitter.

Turning Point USA (TPUSA) described a tsunami of over 30,000 registrations, many of which were fake, for a Jan. 20 event discussing Antifa that was to feature journalist Andy Ngo at Dartmouth that was posted on Eventbrite, TPUSA field representative Samuel Lee told the DCNF. That event was later shifted to a virtual event by Dartmouth after alleged threats from Antifa. (RELATED: Free Speech Group Launches ‘Emerson Kinda Sus’ Ad Campaign After College Called Student Group Racist For Criticizing China)

“Ticket spamming has been a recurring tactic of Antifa agitators who seek to disrupt and quash the free speech of conservatives,” Andrew Korvut, a spokesman for TPUSA told the DCNF, describing the spamming as “a recurring and often significant issue.”

“This is the first time the New England territory has seen something of this magnitude,” Lee said in an interview with the DCNF in January.

In a later conversation with the DCNF, Lee explained that the planned event with Ngo was first set up on Eventbrite on Jan. 5, but the event was not promoted or shared on social media for nearly a week.

“The first email that a ticket was being cancelled was on the 11th,” Lee said, explaining that he eventually discovered that numerous fake registrations were made for the event with Ngo before it had even been promoted. He tried to cancel the fake registrations, but found himself having to process refunds, and dealing with error messages.

“First I called them,” Lee told the DCNF, explaining that he got an automated response, then emailed Eventbrite. (RELATED: Andy Ngo Dissects Antifa’s Inner Workings, Explains Why It’s So Effective)

“I am putting on an event and I have been spammed,” Lee’s email to Eventbrite said. “No one has the link yet and we’ve sold 5k tickets in 14 hours.”

Lee eventually turned to searching on Google, saying he spent “longer than I’d like” as he tried to fix the problem. “For each time I tried to go and fix it, there were a couple of hours.”

“I never heard back,” Lee told the DCNF four weeks after sending the email, adding that TPUSA eventually had to manually handle ticketing for the event. He added that Eventbrite’s help center had no option for event organizers who were dealing with spam.

At least two other TPUSA events were targeted with spam registrations, with no response to requests for assistance from Eventbrite, Lee told the DCNF

“We basically block off 2 weeks of pure promotion,” Korvat told the DCNF, adding that “a lot” goes into a given event and that ones with guests bring “added pressure” for the group to have a successful event.

DCNF discovered that having an Eventbrite account was not necessary to sign up for the Wisconsin Conservative Digest’s event. The only line of defense against a phony registration was a question asking if the registrant was a real person, a question that was absent for a TPUSA event at Northern Arizona University in Flagstaff, Arizona also advertised on Eventbrite.

Even though the email address used for the test was linked to an active Eventbrite account, Eventbrite did not ask the DCNF to log into the account associated with the email before processing the checkouts.

“Eventbrite’s Risk Detection and Trust and Safety teams have worked diligently to implement processes that will help detect and prevent the issue,” the company said in a statement. “We are continuing to proactively monitor and address the situation as we care deeply about maintaining a safe marketplace for our community of event organizers and attendees.”