The Biden administration has failed to ensure the security of the U.S. and should look at Poland’s example if it wants to successfully secure the southern border, a Polish government minister, Marcin Romanowski, told the Daily Caller.

Poland is building a wall on its border with Belarus after thousands of illegal migrants threatened to cross its border in August. The EU accused Belarussian President Alexander Lukashenka of facilitating the wave of migrants and trying to destabilize Poland. (RELATED: Thousands Of Migrants Stuck In Between Belarus And Poland As Tensions Flare)

“Tens of thousands of migrants from the Middle East arrived by air to [Belarussian capital] Minsk, and then were transported to the border,” Under Secretary of State for the Ministry of Justice Romanowski said Friday in an exclusive interview, arguing that Russia was responsible for aiding Belarus getting the migrants to Poland.

“Only thanks to the rapid, energetic and responsible reaction of the Polish Government and the dedication of thousands of border guards, soldiers and policemen, it was possible to secure the border in time,” Romanowski said. “To combat further threats, we want to build a wall along the entire border.” 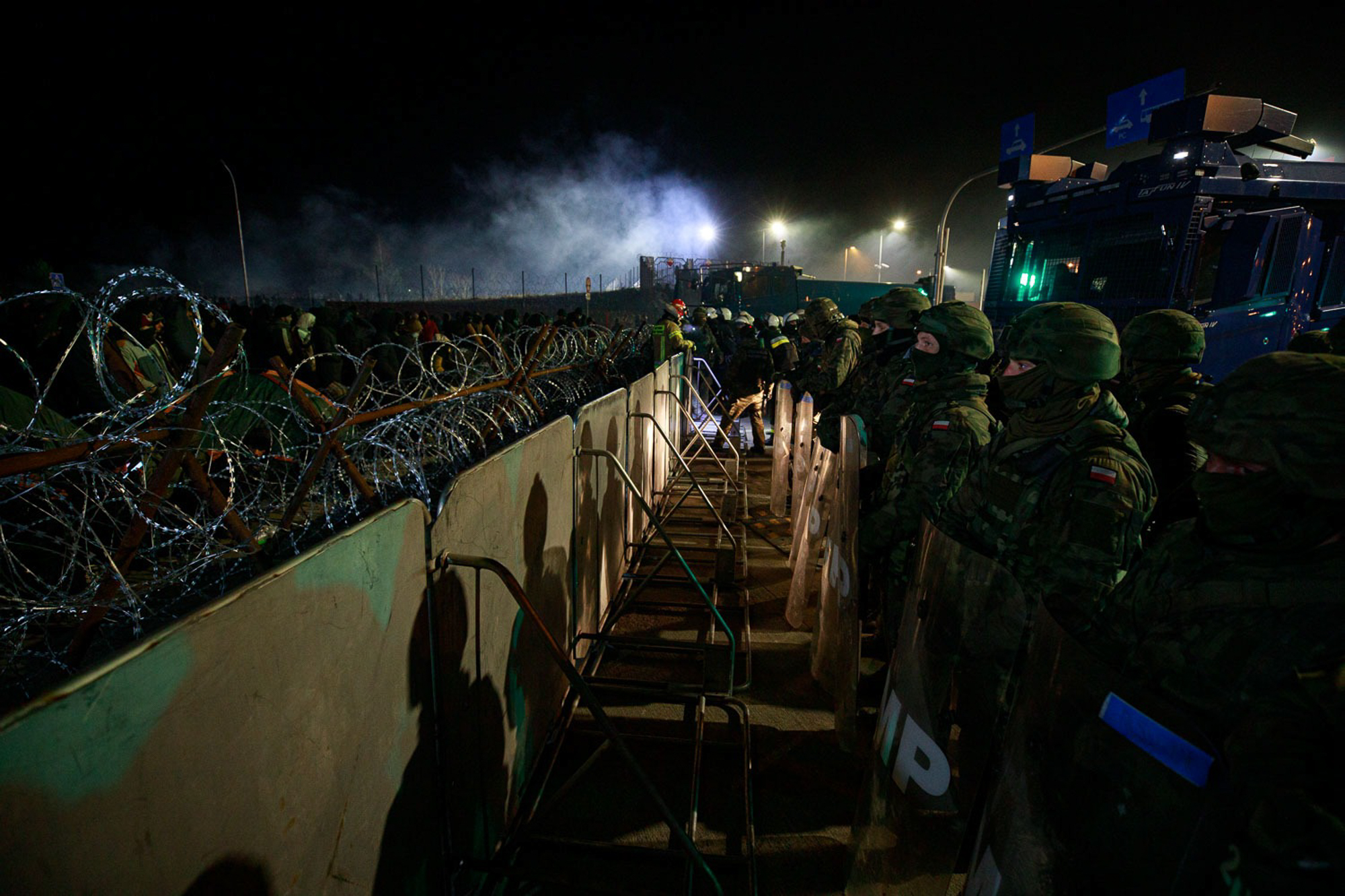 UNSPECIFIED, POLAND- NOVEMBER 15: In this handout photo provided by the Territorial Defence Forces of Poland’s Ministry of National Defence, members of the Territorial Defence Force secure the fence at the closed Kuznica border crossing where thousands of migrants has been relocated by Belarusian soldiers on November 15, 2021 in Poland. There are currently 10-20,000 migrants arriving from Middle East countries to Minsk and making their way to the border between Poland and Belarus. At a cost of 350 million euros and 180 kilometers long, Poland will begin construction of a border wall next month to prevent migrants from entering its territory. (Photo by Territorial Defence Forces of Poland’s Ministry of National Defence via Getty Images)

President Joe Biden has refused to continue the construction of the wall at the southern border, despite a record number of illegal migrants flooding into the country. U.S. Border Patrol encountered over 1.7 million illegal migrants at the southern border for fiscal year 2021, and a record-breaking 200,000 migrants were apprehended in July alone. Migrants from at least 40 different countries have come through Yuma, Arizona, through a hole in the wall known as “The Gap.” (RELATED: Psaki Refuses To Answer Why Harris Has Been Absent From Key Role As Border Czar)

“A permanent border barrier saves both money and security – not only for officers, but also for the people and the national budget. The wall would go a long way to curbing human trafficking and drug smuggling that’s thriving at the moment,” Romanowski said. “President Biden [should] stick to the plan introduced by President Trump and put ideology aside. The lives and safety of U.S. citizens should be primary concern for the federal government.”

Left-leaning media and politicians have criticized Poland’s wall, citing human rights and environmental issues. Environmentalists have raised concerns about harm to animal migration paths if the wall is constructed through the primeval Bialowieza forest, which is on the Polish-Belarussian border.

Romanowski called these arguments “false,” and noted the “dangerous conditions in which Polish border and military officers operate.”

“Belarusian services provoke incidents every day, they cut through barbed wire and even fire shots at Poles. The only way of stopping Lukashenka and illegal migrants is to build the wall,” he said, blasting celebrities and left-leaning politicians who are “calling for unconditional entry of anyone at the border.” (RELATED: Psaki Says The Last Time Biden Was At The Border Was Driving By It In 2008)

Illegal migrants that successfully enter Poland are placed in transit centers, where they wait, sometimes upwards to a year, to receive international protection from the EU, Romanowski claimed.

“Migrants usually do not want to wait and flee at the first possible opportunity… This is a serious problem because we usually know nothing about these people: their past, their connections, their political or ideological commitment,” he said.

Romanowski also praised U.S. support of Poland’s security in sending additional troops to the “eastern flank of NATO” amid the Russian threat to invade Ukraine, while criticizing Biden for letting Russia get this far in the first place.

“Until now, President Trump’s team has been drawing hard red lines to Moscow, keeping it at an appropriate distance,” he said. “Russia had never before dared to organize such large military maneuvers in the immediate vicinity of [Kyiv], nor had it directly threatened war.”

“We trust that the United States will not make the same mistake as under President Obama, when withdrawal from European affairs and resetting relations with Russia cost Ukraine the loss of Crimea,” he concluded.