Psaki spelled Jackson’s name as “Kentaji” and had not deleted the tweet or acknowledged the mistake by press time. Biden announced Jackson as his nominee to fill Justice Stephen Breyer’s seat on the Supreme Court on Friday. Jackson, 51, has served as a judge on the U.S. Court of Appeals for the D.C. Circuit since 2021. (RELATED: Biden’s Supreme Court Nominee A Slam Dunk For Democrats)

There is a lot of upsetting and challenging news in the world right now, but today there is also huge news to celebrate. We can’t wait to see you on the Supreme Court–Judge Kentaji Brown Jackson https://t.co/evASdnaEq0 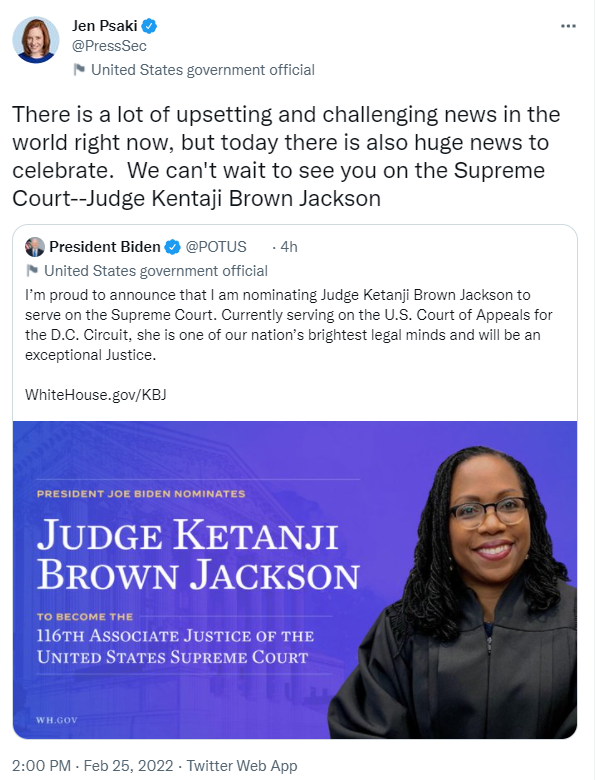 Biden fulfilled his promise to nominate a black woman to the Supreme Court with his pick. The president previously nominated her to serve in her D.C. Circuit Court role in 2021, and she was confirmed in the Senate with a 52-46 vote that included three Republicans. Republican Sens. Lindsey Graham of South Carolina, Susan Collins of Maine and Lisa Murkowski of Alaska each voted for her confirmation at the time.

Biden made great fanfare of Jackson’s status as a black woman during his announcement of her nomination at the White House.

“Today, as we watch freedom and liberty under attack abroad, I’m here to fulfill my responsibilities under the Constitution, to preserve freedom and liberty here in the United States of America,” Biden said Friday as he introduced Jackson. “For too long, our government, our courts haven’t looked like America. I believe it’s time that we have a court reflects the full talents and greatness of our nation with a nominee of extraordinary qualifications, and that we inspire all young people to believe that they can one day serve their country at the highest level.”

Jackson thanked the president and praised Breyer, saying that though she may fill his seat, she will never fill his shoes.

“I must begin these very brief remarks by thanking God for delivering me to this point in my professional journey. My life has been blessed beyond measure and I do know that one can only come this far by faith,” Jackson said.”Among my many blessings, and indeed the very first, is the fact that I was born in this great country,” she added.

“The United States of America is the greatest beacon of hope and democracy the world has ever known. I was also blessed from my early days to have had a supportive and loving family. My mother and father, who have been married for 54 years, are at their home in Florida right now and I know that they could not be more proud.”