Due to challenges and learning loss as a result of the pandemic and remote learning, school districts across the country are accepting more late work and allowing test retakes to make up for a rise in failing grades, the Associated Press reported Wednesday.

Throughout the pandemic, education challenges that come with online learning have impacted students’ grades, many of whom are failing classes at unusually high rates, the AP reported. In school districts across the U.S., students are failing classes at rates by as much as two to three times higher when compared to pre-pandemic levels.

Remote learning has led to declines in test scores in English language arts (ELA) and math when compared to the scores of schools that had more in-person learning, according to a November paper published by the National Bureau of Economic Research (NBER), the Daily Caller News Foundation previously reported.

Changes in ELA were smaller than math scores overall, but drops in scores were greater in districts with larger black and Hispanic populations and students eligible for free and reduced lunch prices. Districts that have a larger share of black and hispanic students and less in-person schooling also saw a greater decline in ELA test scores than those with more in-person schooling.

“Although the impact of schooling mode on ELA is fairly small for districts which are majority white, it is large for those districts with a majority of students of color,” the study said. “Meanwhile, the impact of access to in-person learning had a similar effect on math scores for all districts, regardless of their racial composition.”

Academic struggles can be attributed to not enough support at home, work responsibilities or lack of access to adequate internet, the AP reported. Now, education advocates are pushing for “equitable grading,” which they argue can eliminate grading bias because they believe grades should be a reflection of a student’s understanding of the material rather than their behavior or homework. 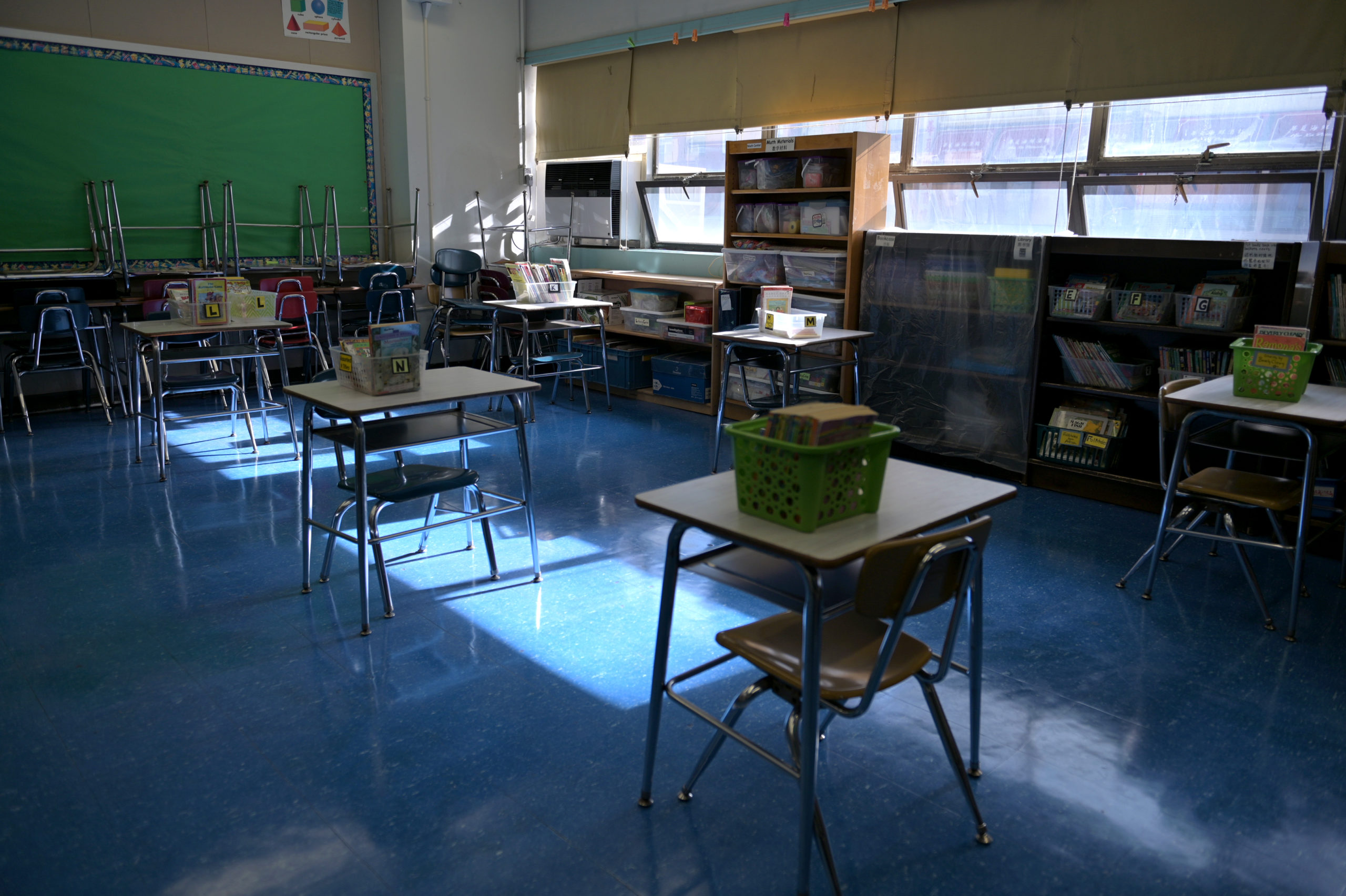 A classroom is empty with the lights off on what would otherwise be a blended learning school day on November 19, 2020 at Yung Wing School P.S. 124 in New York City. NYC Mayor Bill DeBlasio had to return the nation’s largest district had to all-remote teaching/learning as of today, with an indefinite outlook for reopening. (Photo by Michael Loccisano/Getty Images)

Such changes include ridding classrooms of zero-to-100 grading point scales so missed or late assignments have less of an impact on students’ overall grades, the AP reported. In some cases, students are permitted to turn in work late and retake tests, while scratching extra credit assignments which critics argue favor more advantaged students. (RELATED: Politicians, Activists Argue Democrats’ Flip Flop On Mask Mandates Is Motivated By ‘Political Science’ And Electoral Ambitions)

“The problem that I’ve noticed with that is that the kids that are coming in to retake — particularly the tests — are kids who, like scored a 98%,” Beadell said. “Now I’ve turned off their ability to see their grade percentage because it’s bugging me that these kids are so intent on keeping that A-plus.”

Although, those opposed to restructuring grading argue the changes will lower student expectations and standards, the AP reported. Some teachers also worry instituting policies like “equitable grading” gives them less autonomy and more work, such as creating new tests for student retakes.