President Joe Biden’s State of the Union (SOTU) address gave Americans a glimpse into what could be the Democratic Party’s plan to take on midterms and the 2024 election.

The president’s speech saw significant departures from previous party rhetoric around COVID-19, immigration and police, and subtle pivots on issues that have dragged his poll numbers.

Biden’s promise of death for the unvaccinated over Christmas became a plea for schools to remain open and in person. Inflation, for Biden, became a cause for buying American, a slogan that often polls well.

Biden seemed to take note of Republican’s election win in Virginia, where former Democratic Governor Terry McAuliffe had made former President Donald Trump a centerpiece of his campaign. The president didn’t mention Trump by name a single time. And the January 6 riot — a subject Democrats often bring up and focus on — played no role in Biden’s SOTU address.

Throughout his speech, which began with lengthy remarks regarding the Russian invasion of Ukraine, the president mentioned a few new policy plans. Largely, however, he opted to tout his administration’s already-existing agenda and plans, trying to paint them in a fresh light for tired Americans. (RELATED: Biden Attacks Trump On Jan. 6 Anniversary As Republicans Accuse Him Of Political Theater)

Revised focus on the pandemic

On the COVID-19 pandemic, the president pivoted from his often dire messages issued in the past and instead honed in on the positive steps towards normalcy the country made in recent days and weeks. He touted the Centers for Disease Control and Prevention’s (CDC) announcement – issued just before Biden’s address – on mask guidance, saying that it means “most Americans in most of the country can now be mask free.”

“Thanks to the progress we have made this past year, COVID-19 need no longer control our lives,” Biden said before promising to “never just accept living with COVID-19.”

During his COVID-19 remarks, the president also called on schools and businesses to remain open, declaring that the U.S. now has “the tools we need.” While he noted that new variants could still arise, he sought to reassure Americans that the worst had passed – and that the country can move towards normalcy.

“Our schools are open. Let’s keep it that way. Our kids need to be in school,” Biden said, repeating a push made by many members on the right earlier on in the pandemic.

Biden, while calling for schools to remain open, did not go so far as to promise that children who have struggled to learn amid the COVID-19 pandemic will be provided ways to catch up. He also didn’t focus on Republicans’ current push to unmask young children in schools. (RELATED: It’s ‘Not Sad At All’ That Kids Are Afraid Of Going Maskless, Expert Says) 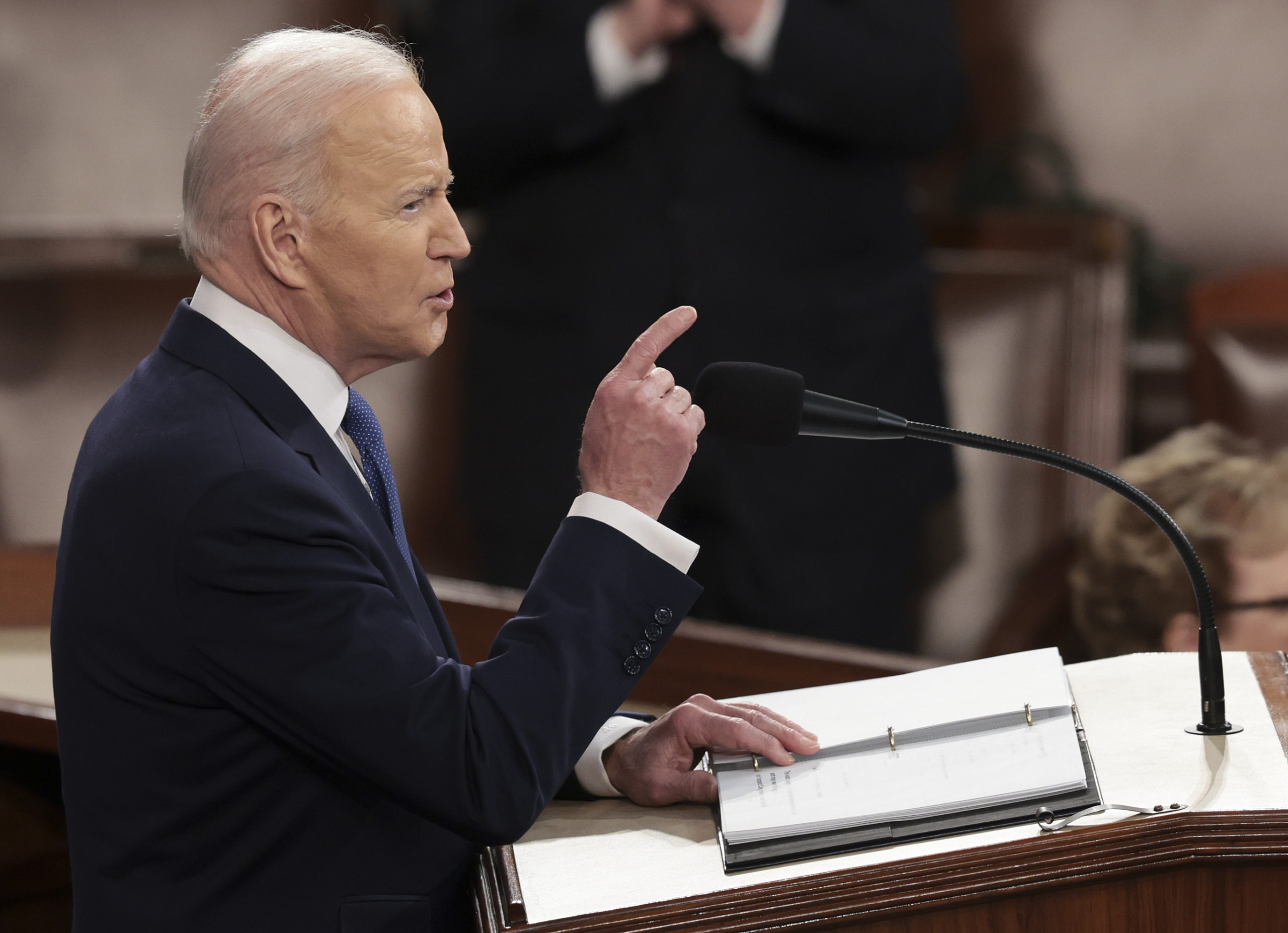 WASHINGTON, DC – MARCH 01: U.S. President Joe Biden delivers the State of the Union address during a joint session of Congress in the U.S. Capitol’s House Chamber March 01, 2022 in Washington, DC. During his first State of the Union address Biden spoke on his administration’s efforts to lead a global response to the Russian invasion of Ukraine, work to curb inflation and to bring the country out of the COVID-19 pandemic. (Photo by Win McNamee/Getty Images)

On the state of the economy, Biden highlighted the positives, making sure to point out that the U.S. “created over 6.5 million new jobs last year.” This, the president declared, marked “more jobs created in one year than ever before in the history of America.”

“Our economy grew at a rate of 5.7% last year, the strongest growth in nearly 40 years, the first step in bringing fundamental change to an economy that hasn’t worked for the working people of this nation for too long,” the president said before going into his administration’s plan for “a new economic vision for America.”

This plan, according to Biden, includes growing the workforce, investing in the U.S., educating Americans and more. He reiterated his disapproval for “tax breaks to those at the very top” and declared that the middle class must grow.

With a tough year passing his legislative agenda, Biden also touted one of his few wins: passing the Bipartisan Infrastructure Bill. He said America is about to have an “infrastructure decade” and said his plan will “put us on a path to win the economic competition of the 21st century.”

Although Biden tried to focus on the positives, he also had to address the soaring inflation Americans have been suffering with. Upon bringing this topic up, Biden prefaced the struggle by reiterating “all the bright spots in our economy.”

“Inflation is robbing them of the gains they might otherwise feel. I get it. That’s why my top priority is getting prices under control,” he said, blaming the COVID-19 pandemic for this issue.

Pivoting off of inflation, the president pushed his legislative agenda, saying his “plan to fight inflation will lower your costs and lower the deficit.”

Throughout his presidency and during his campaign for office, Biden has put a focus on making more products in America. He reiterated this plan on Tuesday evening, calling for making more cars, semiconductors, infrastructure, goods and innovation in the U.S.

“Instead of relying on foreign supply chains, let’s make it in America,” Biden said, though he didn’t go into detail on how the U.S. can achieve these goals and didn’t mention energy.

“I have a better plan to fight inflation,” he also declared. “Lower your costs, not your wages.”

In a direct rebuke of some of his party’s more left-wing members, the president made his view on the “defund the police” movement clear:

His comment prompted one individual in the crowd to yell “that’s right!” as members from both parties stood to applaud. Biden has voiced his opposition to defunding the police in the past.

Though Biden also focused on gun crime – what his administration has pointed to as crime surges across the country – his outright statement against defunding the police is a message that Republicans and most Democrats can get behind.

Littered throughout his speech, given at a time when the country remains divided, were moments like this – mentions of subjects that Republicans can get on board with. 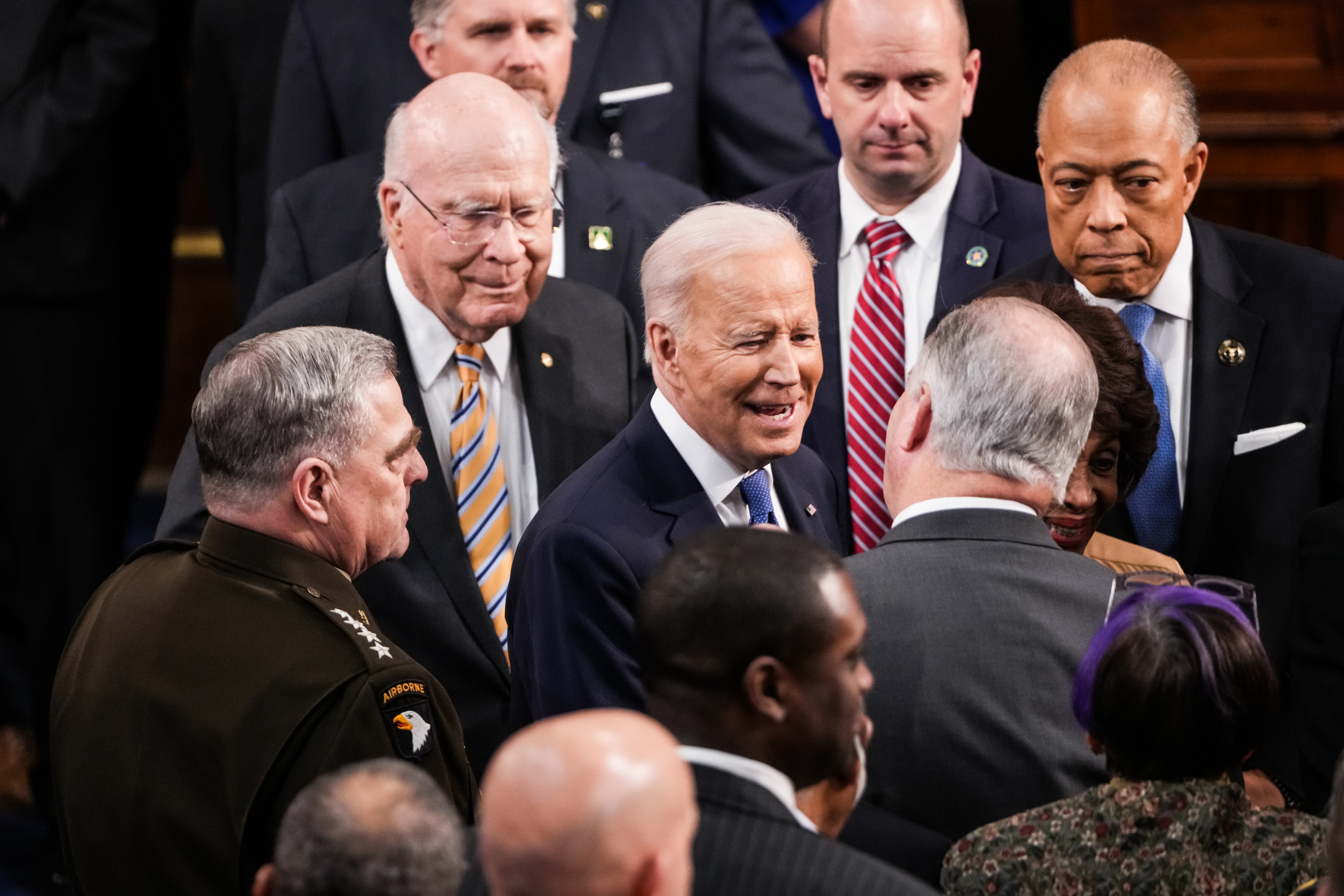 NYTSOTU2022 – President Joe Biden departing after delivering his State of the Union Address to Congress in the Capitol on March 01, 2022 in Washington, DC. During his first State of the Union address, Biden spoke on his administration’s efforts to lead a global response to the Russian invasion of Ukraine, work to curb inflation, and bring the country out of the COVID-19 pandemic. (Photo by Sarahbeth Maney-Pool/Getty Images)

Biden called on his administration to “Secure the border”

Another example of a subject that members of both sides can get behind was Biden’s brief mention of the border. The U.S. has seen a border crisis under this administration, though the White House previously sought to put the blame on Trump and COVID-19 for the surge of migrants trying to cross.

Biden has been criticized by not only Republicans, but also some Democrats, regarding the situation at the border. Though the president didn’t outline a specific and detailed plan to combat the border crisis, he did say it needs to be secured.

“If we are to advance liberty and justice, we need to secure the border and fix the immigration system,” the president declared during his SOTU address.

Many Democrats have pushed for reforming the country’s immigration system. By mentioning both, Biden focused on both sides of a key issue plaguing the country under his administration. (RELATED: Senate Parliamentarian Blocks Immigration Reform From Democrats’ Spending Bill For Third Time)

The president continued on to highlight what his administration has done regarding the border, mentioning joint patrols to catch human traffickers and implementing “dedicated immigration judges” so migrants can get their cases heard faster.

“We can do all this while keeping lit the torch of liberty that has led generations of immigrants to this land—my forefathers and so many of yours,” the president said.

As his speech came to a close, the president offered few new plans and didn’t appear to shift his policy plans.

Instead, he attempted to paint a new picture for tired Americans of what his administration has achieved and what he wants for the country going forward.

The president also opted against attacking those who disagree with his stance – something he’s done in the past, though he ran on a message of unity. On Tuesday, he went back to that unity message, rebranding his presidency and plans as “a Unity Agenda for the Nation.”

To wrap up his remarks, which lasted just over one hour, Biden mentioned four things “we can do together,” highlighting beating the opioid epidemic, taking on mental health – particularly in children, supporting veterans and ending cancer “as we know it.”

“A unity agenda for the nation,” the president said. “We can do this.”