A former spokesperson for Ukrainian President Volodymyr Zelenskyy said it would be a “tragedy” if Vice President Kamala Harris were to win the presidency in reaction to a video of Harris speaking at a press conference.

“It would be a tragedy if this woman won the presidency,” Iuliia Mendel said on Thursday in a since-deleted tweet. The tweet was posted alongside a video of Harris with Polish President Andrzej Duda.

Harris was asked whether the U.S. would accept fleeing Ukrainians amid concerns the refugee systems in place in Poland cannot sustain the number of people entering the country. The reporter then asked Duda separately whether he asked the U.S. to accept more refugees.

Only Kamala Harris would find it appropriate to laugh when talking about the topic of Ukrainian Refugees.

“Okay,” Harris said, proceeding to laugh. “A friend in need and is a friend indeed,” she said, laughing more and letting Duda speak first.

Mendel worked as Zelenskyy‘s press secretary from July 2019 to July 2021. Prior to working for Zelenskyy, she contributed to a 2019 report in The New York Times on how President Joe Biden, as vice president, pushed Ukraine to fire the country’s top prosecutor, who the U.S. accused of impeding corruption reform. 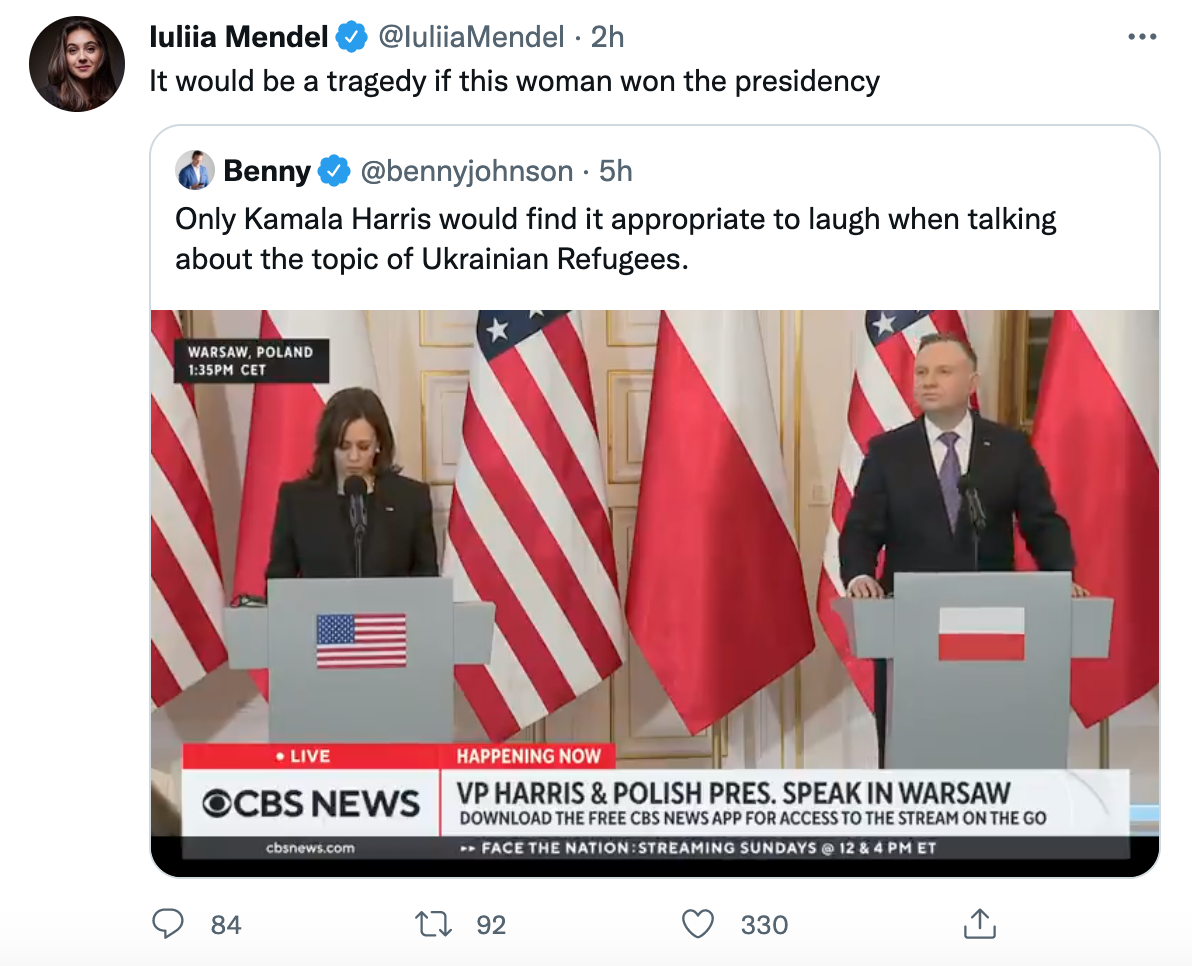 The prosecutor previously investigated a Ukrainian energy company that worked with Biden’s son, Hunter, according to the NYT article. The NYT report suggested the possibility of a connection between the former vice president’s official activities and his son’s business dealings, but provided only circumstantial evidence to support the suggestion. (RELATED: ‘Decisive, Overwhelming Force’: How China Will Learn From Russia’s Invasion)

Mendel, who was a freelance journalist at the time, applied to be Zelenskyy’s press secretary two days after the NYT story was published, CNN reported. Critics argued Mendel’s application amounted to a conflict of interest, and the NYT said they would not have assigned the story to Mendel if they had known about it, CNN reported.