From killing his opposition to censoring media and arresting anti-war protesters, Russian President Vladimir Putin will stop at nothing to prevent his biggest fear from coming true: a movement within Russia that would leave him without power.

Russian elites and Putin’s inner circle during Russia’s war with Ukraine may be key players in realizing his fear, according to Herman Pirchner, president of the American Foreign Policy Council and Russia expert. (RELATED: People Online Are Tracking Russian Oligarchs’ Yachts For Seizure Around The World)

Putin is most afraid of losing power as “Russia’s elite begin to understand how much his invasion of Ukraine hurt both Russia’s national interest and the personal interests of those hundreds of people who collectively keep Putin in power,” he told the Daily Caller. 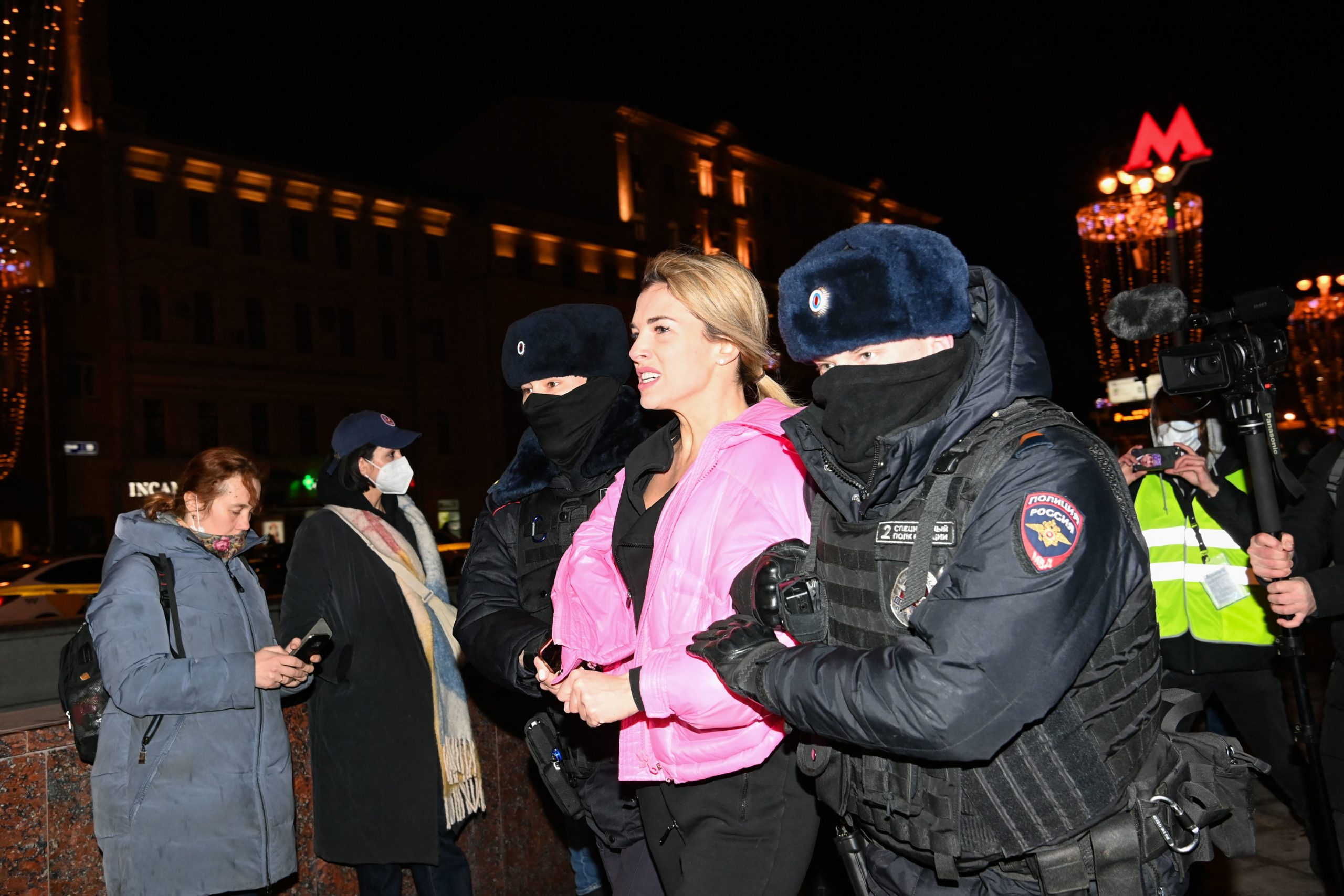 TOPSHOT – Police officers detain a woman during a protest against Russia’s invasion of Ukraine in Moscow on February 24, 2022. Russian President Vladimir Putin launched a full-scale invasion of Ukraine on Thursday, killing dozens and triggering warnings from Western leaders of unprecedented sanctions. Russian air strikes hit military installations across the country and ground forces moved in from the north, south and east, forcing many Ukrainians flee their homes to the sounds of bombing. (Photo by KIRILL KUDRYAVTSEV/AFP via Getty Images)

Peter Rough, a senior fellow at the Hudson Institute, agreed with Pirchner, saying that military defeat in the war in Ukraine may be dangerous for Putin’s fears.

“Russian history is replete with military defeats leading to political change. So, he will badly want a victory in Ukraine, which means military escalation (encircling Kyiv and/or attack on Odessa) coupled to political demands (at minimum, Ukraine accepting Crimea as Russian and the Donbass as Russian-controlled independent states). I would interpret any cease-fires or deescalation zones short of that as ploys or stratagems rather than genuine commitments,” he told the Daily Caller.

Putin is so afraid of losing power at home that “he is arresting Russians who demonstrate against the war, banning independent media in Russia, and forcing citizens to participate in false rallies, chants, and other displays of support using the increasingly ubiquitous ‘Z’ sign,” Elise Giuliano, Columbia University professor and Russia expert, said.

“The visual symbol Z and the involvement of teens and young adults in militaristic displays of support for Putin imitates the methods and the use of the swastika by Nazi Germany,” she told the Daily Caller.

The International Gymnastics Federation (FIG) is to open disciplinary proceedings against Russia’s Ivan Kuliak, who wore a ‘Z’ symbol during a medal ceremony. There was no handshake between the bronze medallist and winner, Illia Kovtun of Ukraine #rtesporthttps://t.co/lbxCvDsJei pic.twitter.com/dnA9EcVhOE

Putin’s fear of an internal movement that would remove him from the presidency has a historical precedent, Alexis Mrachek, research associate for Russia and Eurasia at the Heritage Foundation, told the Daily Caller.

“We’ve seen in the past that he does not respond well to any real opposition in the presidential elections or otherwise. Historically he imprisons, poisons, and kills Kremlin critics,” she said. “For example, in 2006, he poisoned and killed Aleksandr Litvinenko, a former KGB officer who later turned into a Kremlin critic. In 2015, he killed Boris Nemtsov, another Putin critic, just steps from the Kremlin. Then in 2020, he poisoned Aleksei Navalny, Russia’s most prominent opposition leader, and in 2021, threw him in prison.”

“This being Putin’s biggest fear is the reason why so many Russian protestors are being imprisoned, and why independent and Western media outlets are being forced to shut down in Russia currently,” she concluded. “He’s trying to reduce his opposition as much as possible, and kill off the telling of the truth of his war in Ukraine in order to preserve his regime.”