President Joe Biden threatened to veto a vote to overturn the public health order requiring masks on airplanes and other forms of public transportation, according to Reuters.

The Senate voted 57-40 Tuesday to overturn the 13-month-old public health order, which is set to expire Friday. The Biden administration said March 10 that it would extend the masking requirements through April 18. Republicans had demanded the administration end the mandate by its original March 18 deadline. Ninety-two Republicans sent a letter to the Transportation Security Administration (TSA), citing declining case numbers along with the Centers for Disease Control and Prevention’s (CDC) February guidance that advises “more than 90% of Americans can stop wearing masks and social distancing or avoiding crowded indoor spaces.” 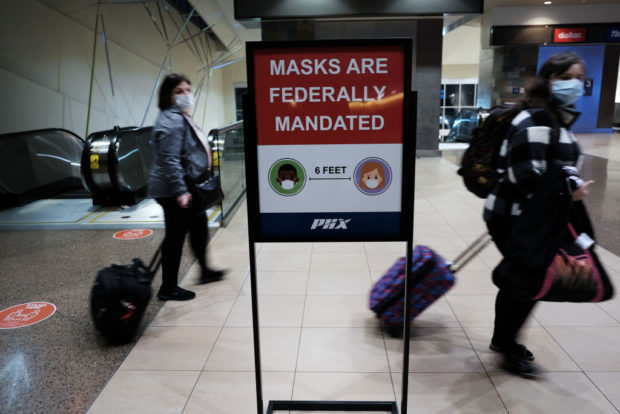 PHOENIX, ARIZONA – DECEMBER 18: People walk through Sky Harbor International Airport in Phoenix where new COVID-19 cases are down but health experts warn cases may rise with the introduction of the omicron strain on December 18, 2021 in Phoenix, Arizona. (Photo by Spencer Platt/Getty Images)

Following Tuesday’s vote, the White House said “circumstances under which masks should be required in these settings should be guided by science, not politics,” according to Reuters.

“Today, the Senate said enough is enough, and sent a message to unelected government bureaucrats to stop the anti-science, nanny state requirement of travel mask mandates,” Paul said in a statement Tuesday. “Since March 2020, unelected bureaucrats have incessantly declared that we should ‘follow the science.’ But the same bureaucrats continue to defy science by imposing an ineffective and restrictive mask mandate for individuals traveling on public transit and airplanes.”

“The federal government still uses fear mongering to stubbornly perpetuate its mandates, rather than giving clear-eyed, rational advice on how to best protect yourself from illness,” he continued.