The New York Post (NYP) editorial board slammed The New York Times (NYT) on Thursday for conceding that Hunter Biden’s laptop, and the contents on it, are real.

“Forgive the profanity, but you have got to be s–tting us,” the NYP wrote. “First, the New York Times decides more than a year later that Hunter Biden’s business woes are worthy of a story. Then, deep in the piece, in passing, it notes that Hunter’s laptop is legitimate.”

There were email exchanges between Hunter and other colleagues about “Burisma and other foreign business activity,” the NYT noted in a story published Wednesday. “Those emails were obtained by The New York Times from a cache of files that appears to have come from a laptop abandoned by Mr. Biden in a Delaware repair shop.”

“The email and others in the cache were authenticated by people familiar with them and with the investigation,” the NYT reported.

The NYP later mocked the Times, alleging its New York counterpart failed to dig in and push back on deflections from the Biden family.

“Authenticated!!! You don’t say. You mean, when a newspaper actually does reporting on a topic and it doesn’t just try to whitewash coverage for Joe Biden, it discovers it’s actually true?” the NYP wrote.

The NYP said the Times “never missed a chance to cast doubt on the laptop” and called it “unsubstantiated.” The Times quietly removed its assertion in September that the NYP’s reporting on Hunter’s laptop was “unsubstantiated.” (RELATED: Here’s What We’ve Found Digging Through Hunter Biden’s Alleged Laptop)

“Why was it unsubstantiated?” the NYP wrote. “Because of willful ignorance and the Times’ curious lack of curiosity. Hunter’s business partner Tony Bobulinski came forward immediately after The Post’s reports and confirmed that the emails bearing his name were legitimate. The Biden’s didn’t even deny it was true! They just deflected, with the media’s help, saying it was a dirty trick or not a story. Mostly, the press just ignored it.” 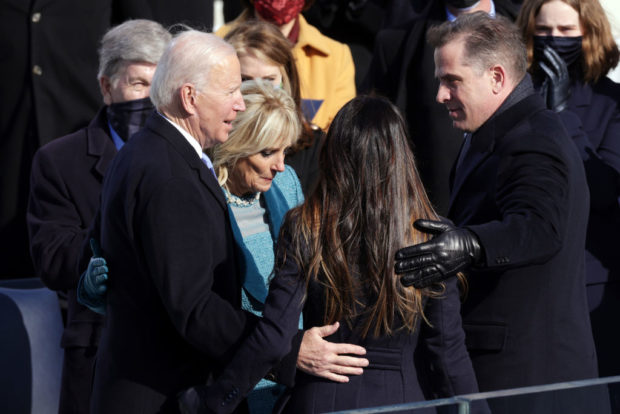 WASHINGTON, DC – JANUARY 20: U.S. President Joe Biden hugs his wife Dr. Jill Biden, son Hunter Biden and daughter Ashley Biden after being sworn in as U.S. president during his inauguration on the West Front of the U.S. Capitol on January 20, 2021 in Washington, DC. (Photo by Alex Wong/Getty Images)

“The Times does a hand wave to anonymous sources. No facts have changed since fall 2020. They knew the laptop was real from the start. They just didn’t want to say so,” the NYP editorial board alleges.

The NYP published a series of emails from Hunter’s laptop after it was abandoned at a computer repair shop in Delaware. One email alleges then-Vice President Joe Biden, Hunter and a Ukrainian executive at Burisma met for a meeting, while former business partner Tony Bobulinski confirmed a 2017 email that there was a big business deal involving a Chinese energy company.

NPR announced it would not cover the laptop story because it didn’t “want to waste listeners’ and readers’ time on stories that are just pure distractions.” The outlet said the NYP investigation had “many, many red flags.”

Twitter suppressed the story, blocking users from sharing the article less than a month before the 2020 election.