U.S. officials are quietly preparing for more than 170,000 migrants to arrive at the southern border if a COVID-era expulsion policy is lifted, according to Axios.

Intelligence officials reportedly fear that when Title 42, a Trump-era policy that allows migrants to be rapidly expelled during the COVID-19 pandemic, is ended, migrants will flood the southern border.

The Biden administration has set up the Southwest Border Coordination Center (SBCC) to plan an emergency response to the potential flood of mirgants, according to Axios. The SBCC will conduct business from DHS headquarters at St. Elizabeth’s Campus in Texas and will be headed by Border Patrol’s Matthew Hudak, according to Axios.

Intelligence officials at the Department of Homeland Security (DHS) estimate roughly 25,000 migrants are already waiting in Mexican shelters just along the border for when the policy ends, the outlet reported.

DHS Deputy Secretary John Tien asked employees “to consider stepping forward to support the DHS Volunteer Force,” citing the potential for the large increase of migrants, according to Axios.

White House spokesperson Vedant Patel said the administration “is doing our due diligence to prepare for potential changes at the border,” according to Axios. (RELATED: Doocy Presses Psaki On Why Migrants Are Being Released Into The US)

“That is good government in action,” the statement reportedly continued. “As always is the case this Administration is working every day to provide relief to immigrants, restore order, fairness and humanity to our immigration system and bring it into the 21st century.” 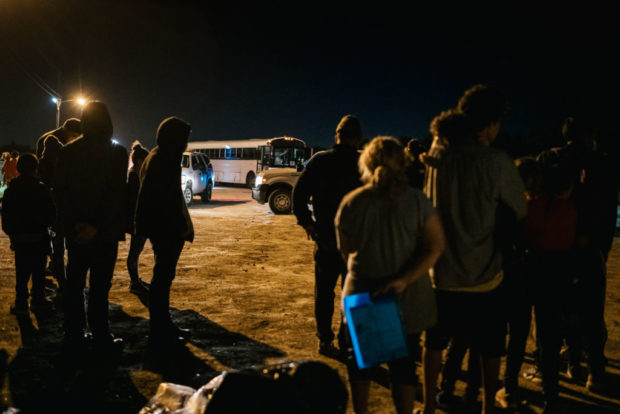 LA JOYA, TEXAS – NOVEMBER 17: Migrant families stand together while waiting to board a border patrol bus after crossing the Rio Grande into the U.S. on November 17, 2021 in La Joya, Texas. (Brandon Bell/Getty Images)

Title 42 prohibits noncitizens from entering the U.S., through Mexico and Canada regardless of their port of origin in an effort to curb the spread of the coronavirus. Unaccompanied migrants are exempt from the order. The restrictions are reevaluated every 60 days as the pandemic continues.

Former President Donald Trump issued the order in March of 2020, and the policy has been used to expel more than 1.6 million migrants.

Under President Joe Biden, migrant encounters at the border have skyrocketed, with most migrants having been expelled under Title 42.

The administration has been looking to scrap the policy, two U.S. officials familiar with the issue told Reuters. A third official said the administration was debating the policy and a decision could be expected over the next few weeks.