Russia’s war in Ukraine can end with diplomacy, but peace talks will only prove successful if one party has a major advantage in the war, experts told the Daily Caller.

Ben Hodges, former commander of United States Army Europe and Pershing Chair in Strategic Studies at the Center for European Policy Analysis, told the Daily Caller that Russia’s military running into problems means a diplomatic solution could be in sight.

“I imagine that [a diplomatic solution] is possible, especially if Russia continues to bleed and have so much trouble like it has right now,” Hodges said, adding that Russia is likely to run out of steam within the next few days.

Russia “won’t be able to continue its offensive. They are already stalling in so many places. So they will start looking for a way out of some sort,” Hodges continued. He cited Russia’s manpower shortage, fuel shortages, potential ammunition shortages and reliance on help from other countries.

“They are recruiting Syrians to come fight, which is an amazing signal. They’re asking China for help… I don’t think they can sustain the amount of bombing and artillery and rockets that they’re doing right now. They still haven’t captured Mariupol and Kyiv,” he said. (RELATED: Biden Warns China Of ‘Consequences’ Should It Aid Russian Invasion Of Ukraine)

“The Russians will only agree [to a diplomatic solution] if they can take advantage, or if they are looking to stall, to buy time to recover,” he said, claiming that Russia is bombing civilians to pressure Ukraine into an agreement to stop the war. 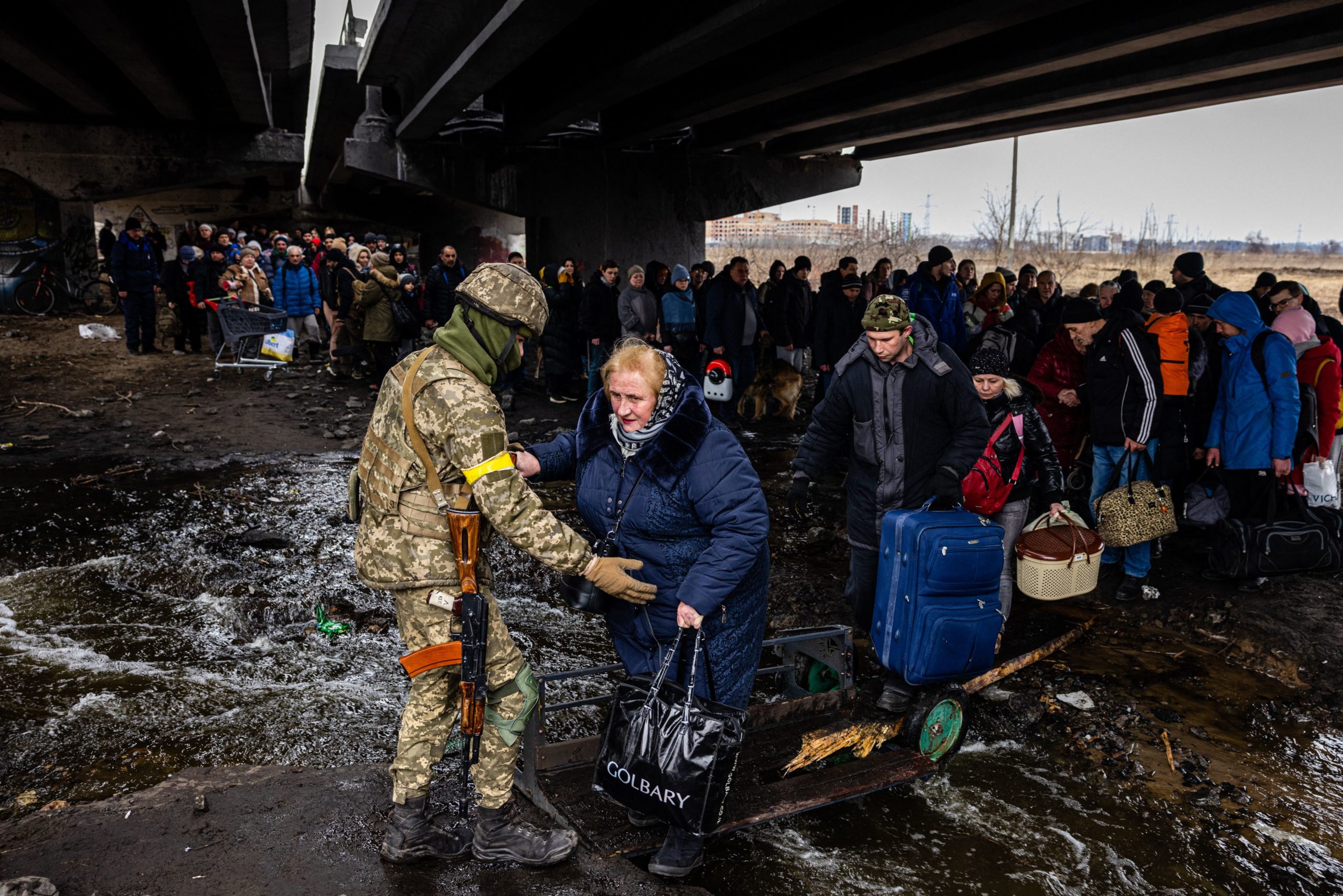 TOPSHOT – A Ukrainian serviceman helps evacuees gathered under a destroyed bridge, as they flee the city of Irpin, northwest of Kyiv, on March 7, 2022. – Ukraine dismissed Moscow’s offer to set up humanitarian corridors from several bombarded cities on March 7, 2022, after it emerged some routes would lead refugees into Russia or Belarus. The Russian proposal of safe passage from Kharkiv, Kyiv, Mariupol and Sumy had come after terrified Ukrainian civilians came under fire in previous ceasefire attempts. (Photo by Dimitar DILKOFF / AFP) (Photo by DIMITAR DILKOFF/AFP via Getty Images)

If Ukraine agrees to a diplomatic solution, giving up territory should not be part of the agreement, Hodges said.

Ukraine “shouldn’t have to give up land that Russia has seized through this aggression, and we should not encourage [Ukraine] to do that… No one should trust for a second that if there is a big agreement where Ukraine declares neutrality, that Russia will respect that,” Hodges said. “All of us will need to keep pressure on Russia, because they don’t have a history of living up to agreements.”

President of the American Foreign Policy Council Herman Pirchner Jr. also told the Daily Caller that Ukraine will not accept any deal that includes giving up territory.

“The three partitions of Poland (1772, 1793, and 1795) ended Poland’s independence. [Russian President Vladimir] Putin grabbed land from Ukraine in 2014 and attacked again in 2022. [Ukrainian President Volodymyr] Zelenskyy well understands the lessons of Polish history and will not accept a peace that only delays the start of the next war,” he said.

“At the minimum this means that Zelenskyy is unlikely to accept the continued presence of Russian troops in any place they did not occupy in 2014,” Pirchner continued.

To get Ukraine to a place of fair diplomatic negotiations, however, “the West has got to provide capabilities like what President Zelenskyy asked the Congress for,” specifically focusing on helping destroy the Russian rocket launchers and cruise missile systems “that are causing most of the damage,” Hodges said.

Peter Rough, a senior fellow at the Hudson Institute, agreed with Hodges that Russia is leveraging its military, including decimating cities and killing civilians, to force Ukraine into an agreement that will benefit Russia. (RELATED: Hundreds Feared Dead, Buried Under Rubble After Russia Bombs Theater In Ukraine Acting As Shelter, Officials Say)

“Based on Russia’s performance to-date, it’s unlikely Putin can achieve the maximalist political objectives with which he went into Ukraine. But Russia is structuring its military campaign to improve its negotiating position,” he said.

“Russia is signaling to Ukraine in Kherson that it is capable of partitioning the entire country. Moscow is also foreshadowing through the destruction of Mariupol what awaits Kyiv if it succeeds in encircling the capital. At that point, Putin could make an offer which some observers, for the sake of ending the bloodshed, might urge Zelenskyy to accept,” Rough added.

“At minimum, Moscow would insist that Ukraine accept: the separatist republics in the east, the loss of Crimea to Russia and military neutrality in perpetuity. Is that a deal Zelenskyy can swallow, even if his people are adamant in their resistance? The real test of statesmanship rests in how he navigates these delicate judgements,” he said.

For a diplomatic agreement to be likely, Ukraine or Russia will have to have a clear advantage, according to Rough.

“The military campaign must first reach stalemate. If Russia breaks out, it will dictate terms. And if it bogs down, Ukraine will defend its sovereignty at the negotiating table, too,” he concluded.

Zelenskyy said Wednesday that Ukrainian and Russian representatives talk on a daily basis, and that they are “moving forward” incrementally.

“We are continuing to work at different levels to encourage Russia to move towards peace … Ukrainian representatives are participating in talks that are taking place virtually every day. It’s very difficult, sometimes confrontational,” Zelenskyy said, according to Reuters. “But step by step we are moving forward.”

Zelenskyy has also repeatedly requested to have a direct meeting with Putin.

“If they want to end the war they must agree to a ceasefire, withdraw troops, then presidents meet. Agree that troops are withdrawn, and that there are certain security guarantees,” Zelenskyy said in an interview Tuesday.

He voiced that Ukraine may be willing to compromise NATO membership, but only if Ukraine is given security guarantees.

“We already understand everything. We are not accepted because [NATO member states] are afraid of Russia. That’s all. And we need to calm down and say that,” Zelenskyy said.

“Say ok, we need other security guarantees. There are NATO member states that want to be the guarantors of our security, which unfortunately, can’t provide us full membership in the alliance, but are ready to do everything the alliance would have to do if we were members of the alliance. And I think that’s a normal compromise,” he said.

Putin laid out his demands in a March 17 phone call with Turkish President Recep Tayyip Erdogan, according to a BBC interview with Erdogan’s spokesman. The demands reportedly included Ukraine becoming neutral and not joining NATO, a disarmament of the Ukrainian army, protection of the Russian language in Ukraine and “de-Nazification,” which could potentially mean a change of leadership in Ukraine, given Putin’s rhetoric about the Ukrainian government. Russia has also demanded that Crimea be recognized as Russian territory, and for Donetsk and Lugansk to be independent states.