Connecticut Sen. Richard Blumenthal is the latest Democrat to express concerns about allegations that Los Angeles Mayor Eric Garcetti looked the other way as a top aide sexually harassed at least two people.

“I have concerns because I’ve seen and heard about the allegations,” Blumenthal told Axios on Wednesday of reports that Garcetti’s advisor Rick Jacobs allegedly sexually harassed a police officer and Garcetti’s former communications director. Sens. Mark Kelly and Kyrsten Sinema of Arizona and Kirsten Gillibrand of New York have also referenced the allegations. Garcetti was nominated July 9 by President Joe Biden to serve as Ambassador to India, and was confirmed by the Senate Foreign Relations Committee in January.

“I want to put them to rest, if that’s possible, before I vote,” Blumenthal added, according to Axios.

Los Angeles police officer Matthew Garza filed a lawsuit against Jacobs in 2020, alleging that Garcetti’s former deputy chief of staff began sexually harassing him 2014. According to the lawsuit, Jacobs allegedly told Garza that he enjoyed “rough sex” and “big cocks,” and would hug the police officer while describing him as “so strong.” In a deposition for the lawsuit, Garza reportedly testified that he waited more than seven years to make the complaints because he feared he would have been “ostracized” and “retaliated against” by Garcetti, who he described as “extremely vindictive.” Jacobs has denied the allegations.

Garcetti has repeatedly denied knowledge of the alleged sexual harassment. A report commissioned by the Los Angeles city attorney’s office and obtained by the Senate Foreign Relations Committee in March claimed that Garza’s allegations “generally lacked credibility” and that “evidence contradicted Ofc. Garza’s complaint” of sexually inappropriate remarks from Jacobs. 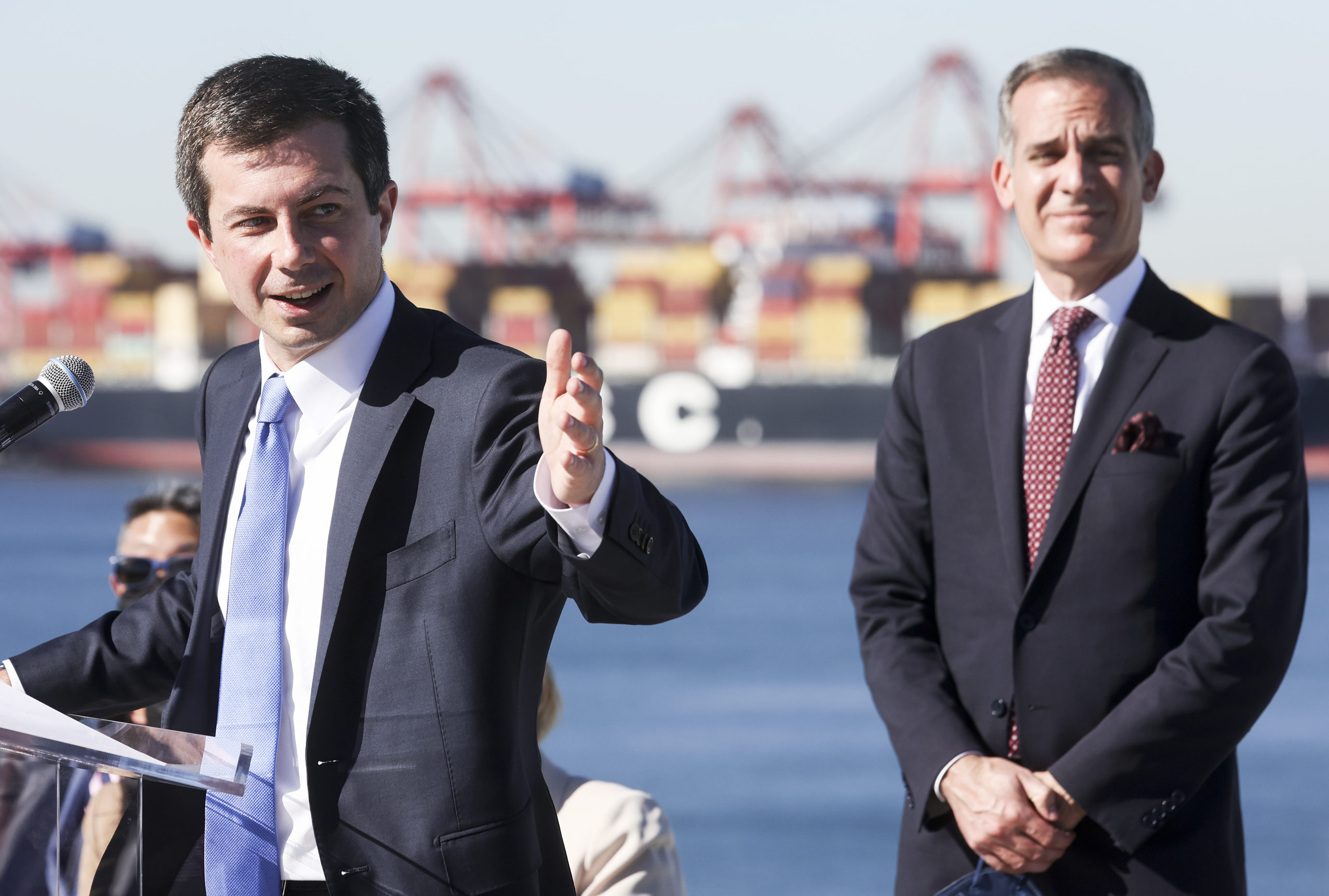 LONG BEACH, CALIFORNIA – JANUARY 11: U.S. Department of Transportation Secretary Pete Buttigieg speaks to the media as Los Angeles Mayor Eric Garcetti (R) looks on after touring the ports of Los Angeles and Long Beach on January 11, 2022 in Long Beach, California. Buttigieg toured the ports to highlight the work of President Biden’s Supply Chain Disruptions Task Force and the progress being made to reduce the backlog of container vessels off the coast. (Photo by Mario Tama/Getty Images)

However, former Garcetti communications director Naomi Seligman corroborated the allegations against Jacobs and filed a complaint with the Department of Justice alleging that Garcetti perjured himself in his Senate testimony.

“I want to say unequivocally that I never witnessed, nor was it brought to my attention, that behavior that has been alleged,” Garcetti told the Foreign Relations Committee during his confirmation hearing. “And I also want to assure you that if it had been, I would have immediately taken action to stop that.”

According to Seligman, Garcetti presided over a hostile work environment at city hall, with several staffers subjected to sexual harassment from Jacobs. Seligman said that Jacobs kissed her on the lips in front of her entire staff, which she described as “humiliating.”

“I experienced it, I reported it, and nothing was done. So on top of the toxic environment that Rick created in and around city hall, people were forced to tolerate his harassment — to the point of pretending it wasn’t happening at all. ” she told New York Magazine. “Once the lawsuit was filed, Mayor Garcetti chose to deny he’d ever seen anything inappropriate — even though, as I had seen for myself, he’d witnessed Jacobs crossing the line on countless occasions. To me, this was a shocking abdication of his responsibilities.”

The White House continues to support Garcetti’s nomination, despite Senate Democrats’ concerns about the allegations.

“The president has confidence in Mayor Garcetti and believes he’ll be an excellent representative in India,” White House spokesperson told Axios. “His nomination advanced unanimously with bipartisan support in committee.”

Garcetti was one of Biden’s top allies during the 2020 election, endorsing the then-former vice president ahead of the Iowa caucuses and serving on his vice presidential vetting committee. Garcetti was reportedly considered for a cabinet position, likely Transportation Secretary, but was repeatedly targeted by Black Lives Matter protests at his home.