A father and son duo, Louis and Anthony Imperato began developing the first Henry Repeating Arms model H001 in Brooklyn, New York, 25 years ago. And while their catalog was limited to a singular lever-action .22 rifle, they had one goal: provide a high-quality rifle that was “Made in America and Priced Right,” as the company’s first motto read.

Since 1997, Henry Repeating Arms guarantees that not only are 100% of the materials used to produce their firearms sourced in America, but every firearm is manufactured with American labor.

When Henry says “Made in America, Or Not Made At All,” they absolutely mean it. Father Louis Imperato served as chairman of Henry from the company’s foundation until his passing in November 2007 and Anthony Imperato currently serves as the CEO and founder of Henry. 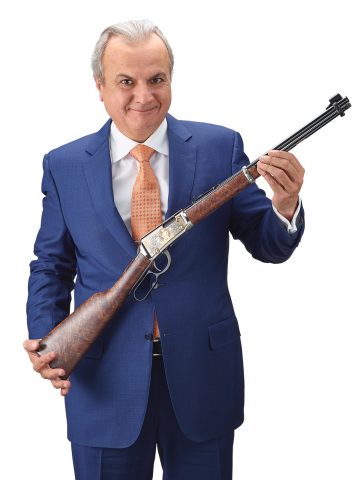 The Daily Caller had the opportunity to talk with Henry CEO and Founder Anthony Imperato about the 2nd Amendment, firearm technology over the years and some of Henry’s business strategies that they have built their legacy on in the lever-action firearm industry.

The constitutional right to keep and bear arms has been consistently under assault by politicians and gun-control advocacy groups for decades. The COVID-19 pandemic, however, ushered in a renewal of 2nd Amendment advocacy and appreciation as previous anti-gun advocates, or those neutral on the topic, sought out their first firearm. How did the COVID-19 pandemic affect Henry, and in Henry’s opinion, summarize the status of the 2nd Amendment in a post-COVID world.

“While the pandemic created significant difficulties and challenges for us as a company (supply chain, and our NJ operation was closed for a few months), it did open many Americans’ eyes to the fact that they cannot depend on the government for the safety of their home, family and property. We have seen an influx of first time gun owners with a new-found interest in self-reliance.”

In Henry’s opinion, does the concept of “common-sense gun control” exist? If so, where is the line drawn?

“Gun control only infringes on the law-abiding. Criminals, by definition, never have and never will follow the law. The “common-sense” thing to do is embrace the spirit of the 2nd Amendment, allow law-abiding citizens to defend themselves against criminals.”

Henry has come a long way from humble a father-and-son company in Brooklyn, New York. The company expanded in 2006 by purchasing an automotive parts factory in Rice Lake, Wisconsin, from Wright Products’ parent company after they announced they would begin sourcing their products from China to compete with their competitors prices. Their Rice Lake location currently serves as the company’s headquarters. Henry’s original New York location moved to Bayonne, New Jersey, in 2008. In 2021 Henry acquired a second location in Wisconsin located in Ladysmith for an overall total of three manufacturing facilities. The company appointed long-time Henry employee, Andy Wickstrom, as the president of Henry in the same year.

Henry started manufacturing rifles in New York and moved to their New Jersey facility in 2008. Both States have very strict legislation on the 2nd amendment. Describe the process of manufacturing and shipping firearms in states that have aggressive stances against the 2nd Amendment and how does it differ from the two Wisconsin locations?

“There are actually no significant differences in firearms manufacturing in New York/New Jersey vs Wisconsin. My family has been in the gun business in New York since the early 1900s, and the greater New England area, Connecticut, Massachusetts are part of what is historically known as “gun valley” – with a multitude of business that still support the industry. That being said, our headquarters was changed to Wisconsin a few years ago and our primary employee growth has been in Wisconsin. We recently purchased a second facility there. At the same time, more onerous gun laws in New Jersey may force our hand. My concern is the 225 families that depend on us at our NJ location.”

While Henry has produced a handful of single-shot rifles, shotguns, and even a survival rifle, their bread and butter in the firearm industry is the lever-action rifle. The company gets their namesake from the original inventor of the lever-action rifle, Henry Benjamin Tyler. Tyler patented America’s unique contribution to international firearms design with the first lever-action repeating rifle in 1860, dubbed the “Henry Rifle.” The lever-action rifle design gave a single man the firepower of a dozen marksmen armed with muzzle-loading muskets and subsequently became the dominant long gun choice from the 1870s to the 1980s. While neither the Imperato family nor Henry Repeating Arms bears any lineage to Tyler, the company assumed the Henry name after Anthony Imperato secured the trademark in 1996. Since their inception, the company’s name has served as a tribute to the inventor and to the original American purebred 1860 model Henry Rifle.

How has Henry found their niche within the firearm market over the last 25 years and what is their strategy for finding niches in the next 25 years and onward as firearm technology expands?

“Twenty five years ago we entered the firearms market with a price point, made in America, lever action 22. From that launch I can confidently but humbly say that Henry has resurrected the lever action market with our broad offerings for all needs and disciplines. Although our niche is the lever action, and we dominate the lever action market, our brand DNA of quality, reliability, lifetime warranty, best-in-industry customer service and of course made in America or not made at all is the foundation for expansion into many other types of firearms. We will retain Henry heritage but be at the forefront of innovation, modern technology and meeting consumer needs in the firearms space.”

How has firearm technology changed in the last 5 to 10 years, and how does Henry incorporate improvements into their firearms while still maintaining their classic western style?

“The first thing that comes to mind is the way we design products and develop manufacturing processes. Advances in software, materials, and processes gives us the opportunities that would have taken longer or been out of reach in the past. In production, metal working technology is in constant evolution. These technical advancements allow features such as extremely smooth and reliable actions, pin point accuracy, and a fit and finish that exceeds consumers expectations.”

Since 1997, Henry has steadily expanded their catalog from the first H001 lever-action to their newer X Model series featuring a tactical-style and synthetic stock to their most recent rugged Long Ranger Express rifle and Lever Action Axe .410 shotgun.

Henry X Models has recently incorporated tactical design and features into the Henry-styled firearm. How does Henry market their lever-action design towards a tactical firearm customer?

“We start by listening to our customers. We expanded on our classic centerfire lever action design and added features that people asked for but not at the expense of features that set Henry apart. The option of a synthetic stock, sights and optics compatibility, with a threaded muzzle give every consumer the freedom to explore tactical modular options.”

Does Henry plan on expanding further into the tactical firearm market, and if so, how?

“The word tactical brings to mind our current slogan “Protect & Provide” – firearms that can protect your home, family, and property as well as put food on the table. We will continue to expand in this arena as there is significant demand for same.”

Henry Repeating Arms has been around since 1997, before the tech/social media boom of the 2000s. How has the advent of social media changed Henry’s marketing strategy and the firearm industry overall?

“In addition to providing additional lanes for us to reach the consumer and vice versa, social media gives us an opportunity to nurture the community that we affectionately refer to as the Henry Family. We learn a great deal about what our customers want through all of the follower interaction, and the different demographics across the major platforms inspire us to consider things outside of our normal wheelhouse.”

While Henry has received a reputation in the firearm industry for their quality firearms and craftsmanship, they have also garnered a reputation for their outstanding customer service. In 2016, Henry Repeating Arms was awarded a Stevie® Award in the Customer Service Department at the American Business Awards. 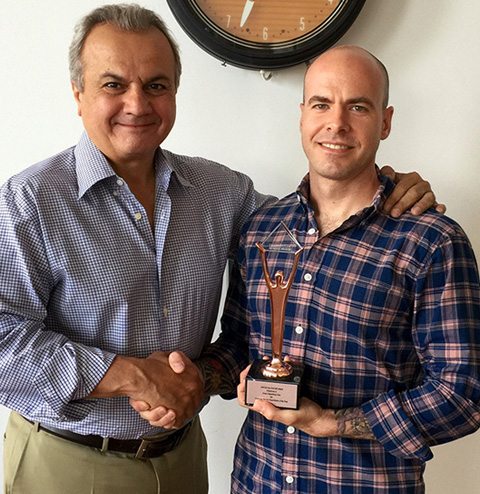 Apart from the signature style of Henry firearms, what distinguishes Henry from other American-made firearm companies?
“What distinguishes us is the personal touch and our extraordinary customer service. I am the face of the company and take it very personally. Henry’s award winning customer service staff is empowered to do whatever it takes to make certain that our customers are 100% satisfied. Issues get resolved immediately. Our customers understand that – that someone really cares that they are spending their hard earned money on a Henry.”

Not only is Henry focused on customers, but the company has also developed a reputation for themselves as a good corporate citizen with their “Guns For Great Causes” program, which donates rifles to raise funds for different organizations and charities. “Guns For Great Causes” most notably provides financial support to children’s hospitals and families of sick children. The program also honors military and first responders and is allied with wildlife conservation and habitat agencies, as well as youth groups. 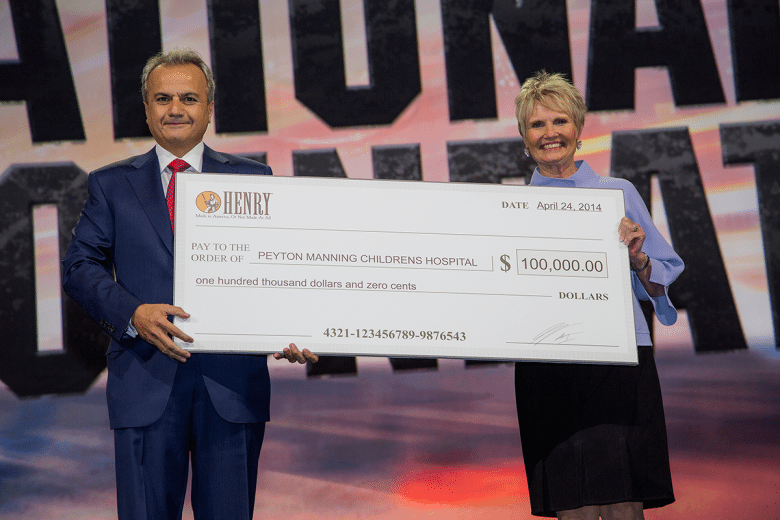 Legacy media often negatively frames firearm manufacturers. What is Henry’s experience with legacy media in regards to your “Guns for Great Causes” program?

“Our Guns For Great Causes charitable endeavors which focuses on sick children, veterans causes, 1st responders, wildlife conservation and shooting sports traditions has for the most part been ignored by the mainstream media. If the media generates anything about our industry it is always negative.”

Over its 25 years in business, Henry has dominated the lever-action firearm market and become one of the top-5 long-gun manufacturers in America. Since their first rifle shipped in 1997, Henry continues to represent the American spirit and ethos of hard work, high-quality products, with an obsession for customer service while showing immense gratitude by giving back to their customers and the community.