Amid soaring gas prices and a new ban on imports of Russian oil, President Joe Biden’s administration remains focused on promoting its clean energy agenda, even pointing to the current crisis as reason why the change must be made.

On March 8, Biden announced a ban on U.S. imports of Russian oil as a result of Russia’s invasion of Ukraine. While the president sympathized with Americans struggling amid high gas prices – noting that “the decision today is not without cost here at home” and promising to “minimize” the impact – he also made a point to highlight how today’s current gas crisis is evidence that the U.S. should “become energy independent.”

“It should motivate us to accelerate the transition to clean energy,” Biden said at the time. “This is a perspective, as I said, that our European allies share and the – a future where together we can achieve greater independence.” (RELATED: How Biden Raised Gas Prices Without Anyone Noticing)

“Loosening environmental regulations or pulling back clean energy investment won’t – let me explain … will not lower energy prices for families. But transforming our economy to run on electric vehicles powered by clean energy with tax credits to help American families winterize their homes and use less energy, that will – that will help,” the president added. 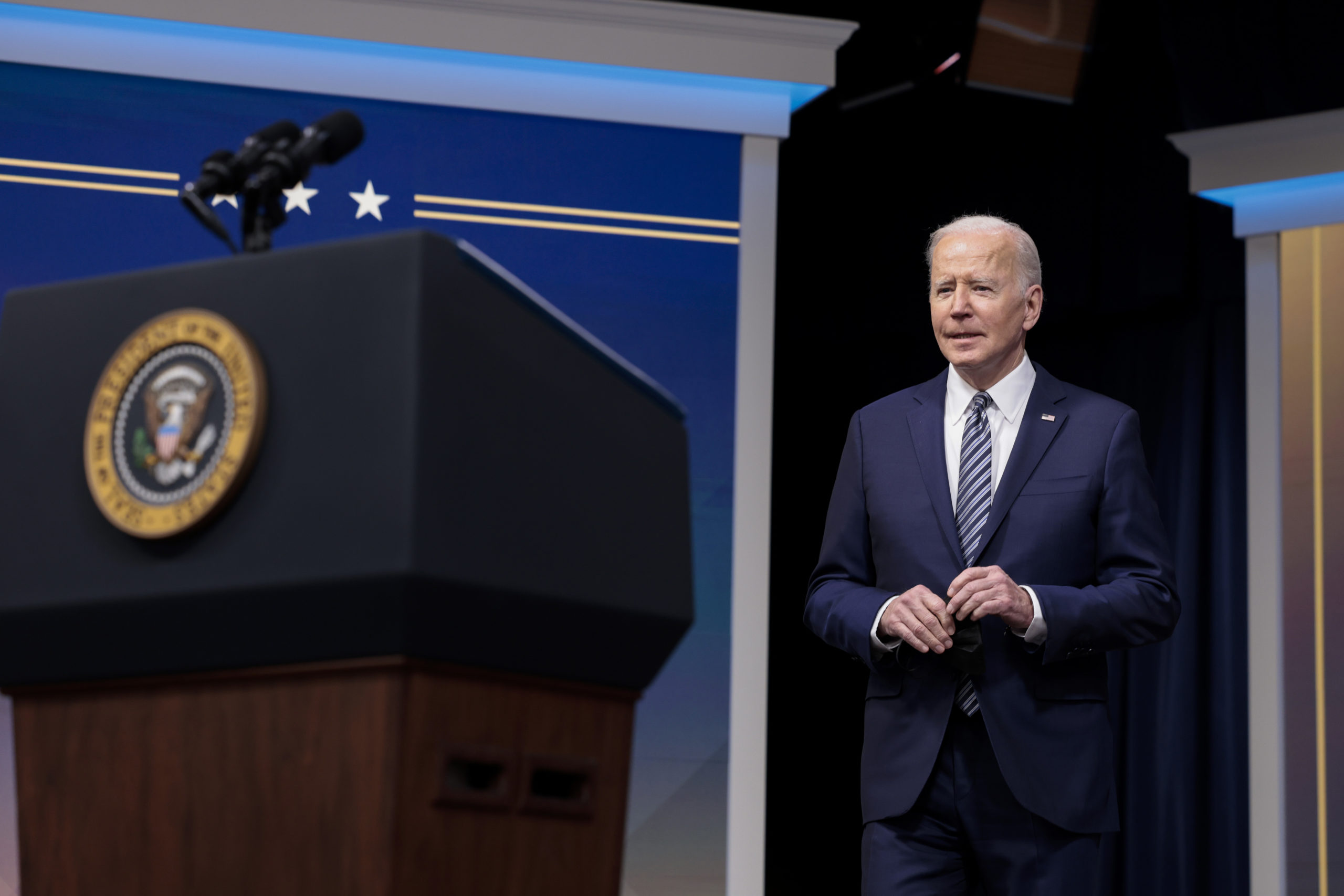 WASHINGTON, DC – MARCH 31: U.S. President Joe Biden arrives to give remarks on gas prices in the United States from the South Court Auditorium of the White House on March 31, 2022 in Washington, DC. During his remarks President Biden announced that he is authorizing the release of barrels of oil from oil reserves over the next six months in an attempt to help ease the price of gas. (Photo by Anna Moneymaker/Getty Images)

Kevin Book, a senior associate of the Energy Security and Climate Change Program at the Center for Strategic and International Studies, told the Daily Caller that while energy will likely change in the future, the administration’s efforts to move over to “clean energy” is unlikely to help Americans who are struggling now.

“The transition is likely to be long,” Book said. “It could potentially be extensive, and in any case it’s not going to be an immediate solution. One of the challenges of the present is that for anybody whose running for office, or trying to defend their party’s majority in the Congress … there’s no electric vehicles coming to the rescue in months.”

“The cost of being a true energy island and cutting ourselves off from the world using only our own resources with no contact with the world would be much, much higher than the price we’re paying now,” Book also said.

Though Biden is perhaps the most notable, he is not alone in pushing for a “transition to clean energy” as Americans see higher gas prices. (RELATED: Biden Promises Lower Gas Prices After Emergency Reserve Release, Suggests ‘Up To 35 Cents’ Lower)

“Imagine a future: the freight trucks that deliver bread and milk to our grocery store shelves and the buses that take children to school and parents to work,” Harris said at the press conference. “Imagine all the heavy-duty vehicles that keep our supply lines strong and allow our economy to grow. Imagine that they produce zero emissions.”

Buttigieg made similar comments April 4, when he suggested that Americans may continue seeing high gas prices until the country can “achieve a form of energy independence that is based on clean energy created here at home.”

“Even if all of the oil we use in the U.S.A. were made in the U.S.A., the price of it is still subject to powers and dynamics outside of the U.S.A,” Buttigieg said. “Which means that until we achieve a form of energy independence that is based on clean energy created here at home, American citizens will still be vulnerable to wild price hikes like we are seeing right now.” 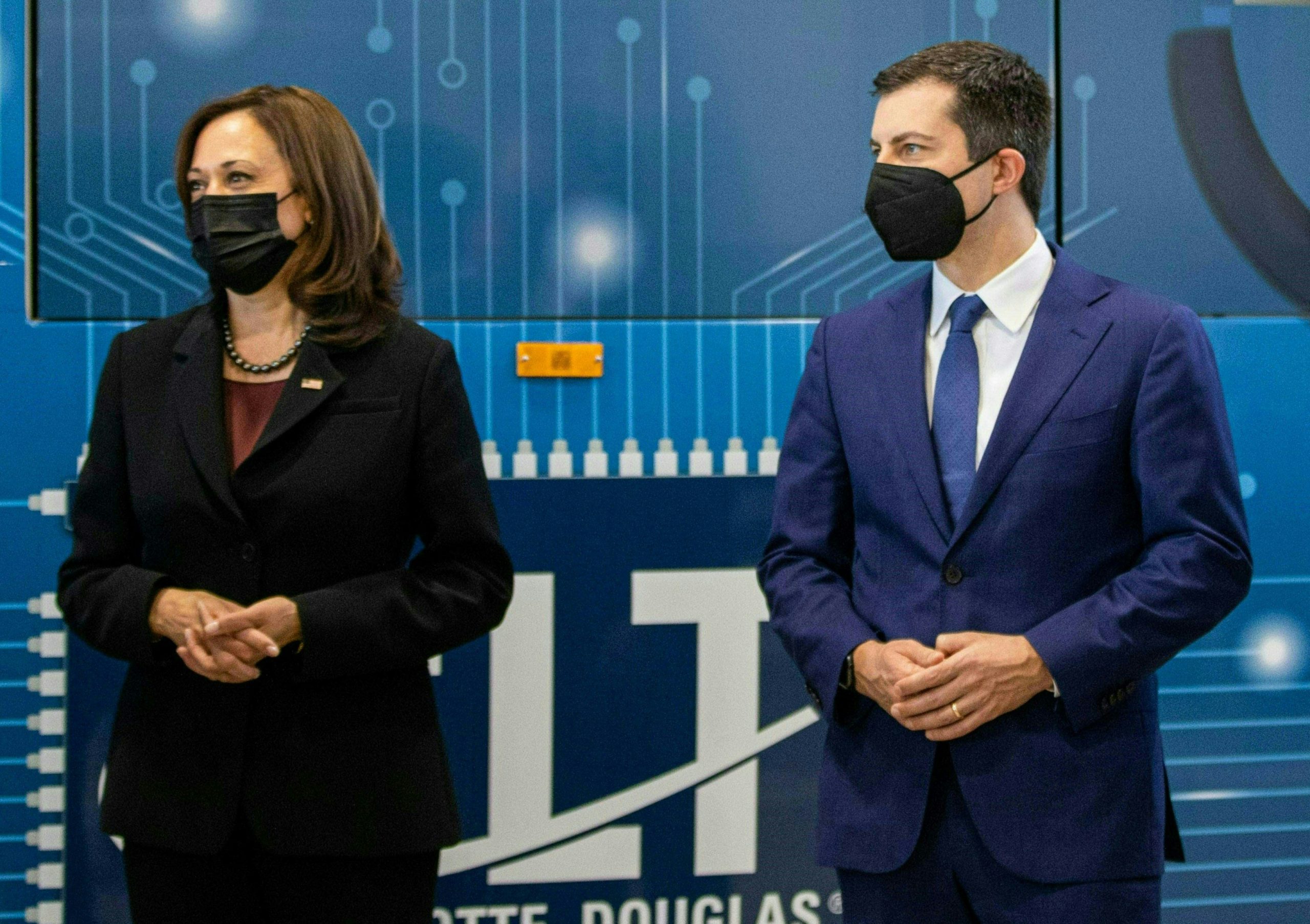 Katie Tubb, a research fellow for energy and environmental issues at the Heritage Foundation, noted that the administration has been “consistent” in its push for clean energy.

“Even in this current situation, he [Biden] is framing it as that much more of a reason why we should be following his agenda for energy policy and a re-engineering of the energy sector,” Tubb said, noting that she’s been “a little surprised that they haven’t changed course at all.”

“They’re trying to frame the current crisis as an argument for wind and solar and electric vehicles, for this vision that they have for the energy sector,” Tubb added.

Ultimately, Tubb argued that the president’s proposal “is incredibly naive,” citing Europe as one example of an area of the world that has been “pursuing this for over 30 years now.”

The administration has, as Tubb noted, been pushing for clean energy throughout Biden’s time in office. Energy Secretary Jennifer Granholm, for example, declared in May 2021 that Americans wouldn’t be affected by high gas prices if they drove “an electric car.”

“I mean, we obviously are ‘all in’ on making sure that we meet the President’s goals of getting to 100% clean electricity by 2035 and net-zero carbon emissions by 2050,” Granholm said during a press briefing when pressed on how “acute issues with the Colonial Pipeline ransomware attack” would “speed up” the administration’s efforts to move into a “renewable” direction.

“And, you know, if you drive an electric car, this would not be affecting you, clearly,” Granholm added.

She made the connection in a statement touting Biden’s recent “historic” decision to “release from the Strategic Petroleum Reserve of 1 million barrels a day for six months” – an initiative announced by the administration at the end of March in an effort to lower gas prices.

Ultimately, though, it remains to be seen whether Americans – currently concerned over gas prices – will jump at the Biden administration’s plan. Brook, for one, argued that the current climate may mean people are less willing to consider the shift.