South Dakota Gov. Kristi Noem laid out her vision for the Republican Party in a speech Wednesday night amid speculation she could launch a campaign for president in 2024.

Noem, who rose to prominence due to her comparatively relaxed COVID-19 restrictions, touched on a wide range of issues while speaking at the Ronald Reagan Presidential Library in California.

Outside of her pandemic policies, the governor emphasized her recent restricting of Critical Race Theory in K-12 classrooms and legislation she signed in February requiring athletes to compete in divisions corresponding to their biological sex, which she called “the strongest bill in the nation to protect girl’s sports.”

Noem garnered heavy criticism from some Republicans for vetoing previous legislation on transgender participation in sports, calling it “vague and overly broad language.”

A potential 2024 contender, Noem finished third in the 2021 Conservative Political Action Conference straw poll, behind only Trump and Florida Gov. Ron DeSantis, but her portion of the vote dropped from 4% to 1.2% in the 2022 poll.

An advance copy of Noem’s speech did not include any reference to former President Donald Trump, according to The Wall Street Journal. She told the outlet that she did not “specifically mention” Trump in the speech and that the Republican Party was not necessarily centered around one person. 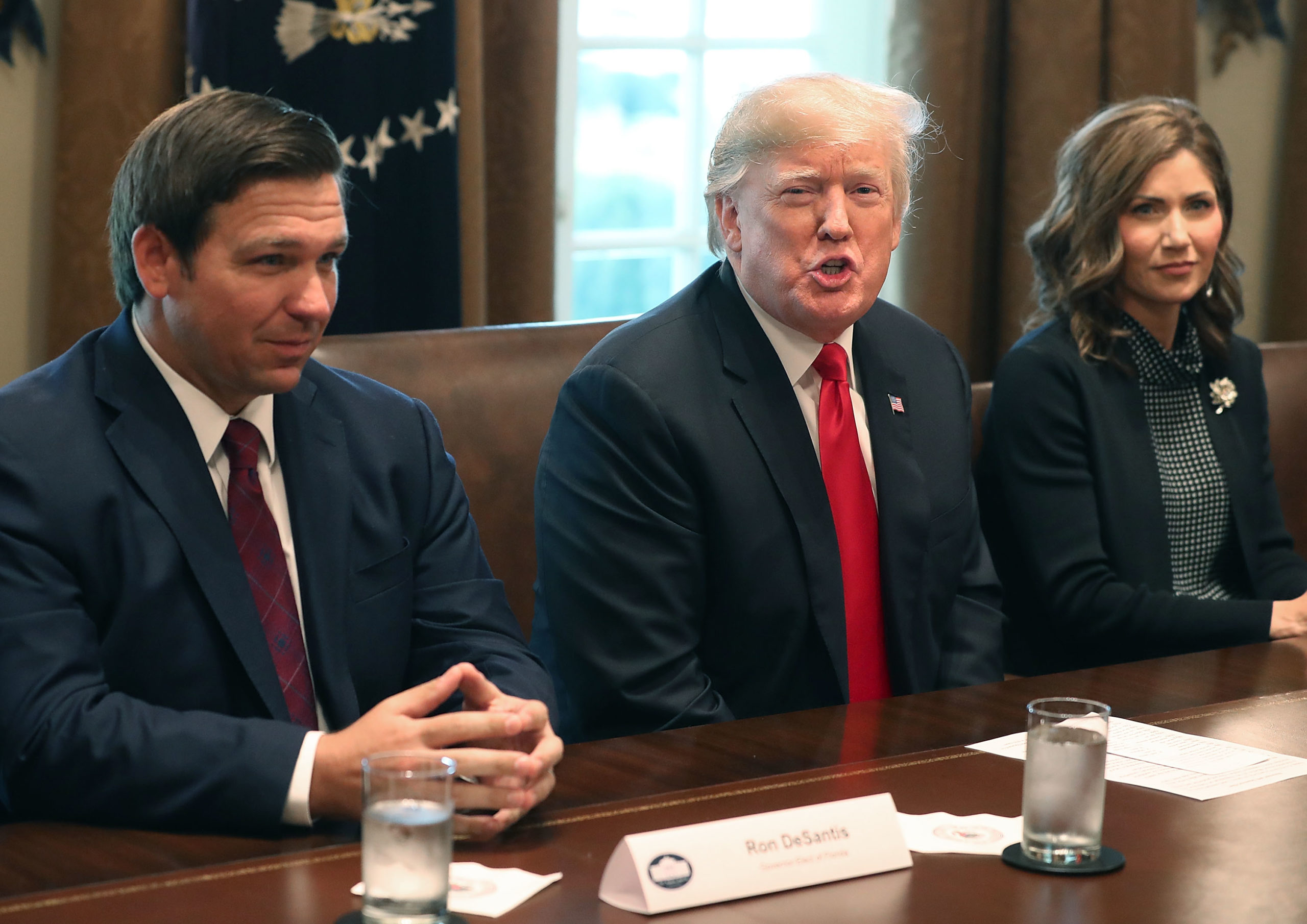 Florida Governor-elect Ron DeSantis sits next to U.S. President Donald Trump and Governor of South Dakota-elect Kristi Noem during a meeting with Governors elects in the Cabinet Room at the White House on December 13, 2018 in Washington, DC. (Photo by Mark Wilson/Getty Images)

At the podium on Wednesday, however, the governor heaped praise on Trump’s accomplishments and spoke of how she campaigned for his reelection.

“More than any other governor in America, I traveled to 17 states to campaign for President Trump’s reelection efforts,” Noem said at the podium. “I knew that elections have consequences and I did not want to wake up and have a leader who wouldn’t put America first.”

“His administration restored America’s dominance on the world stage, made us energy independent, feared our adversaries and we were respected by our allies,” she continued. “He created an economy, pre-pandemic, that was one of the strongest this nation has ever seen.”

Noem’s campaign manager, Joe Desilets, told the DCNF that the WSJ only saw an early draft of the speech and that updates had been made “every day” since it was handed to the outlet. He said the addition of the Trump section was made prior to the article’s publishing and that no one from the former president’s team reached out about the speech.

“Not sure why the reporter tried to manufacture some drama with his framing,” Desilets said.