Some parents in the Ann Arbor Public School (AAPS) district received threats of criminal trespassing charges April 13 for refusing to comply with the district’s mask mandates, according to a trespassing charge obtained by the Daily Caller.

Before an AAPS Board of Education meeting, maskless parents received “Individuals Who Violate the Board of Education Mask Mandate Inside School Property” charges by the school’s Executive Director of Students and School Safety Liz Margolis.

AAPS maintains a universal masking policy in place, regardless of vaccination status, according to the district’s website. Critics point out that the school provides no guidance for when the requirement may end.

“This letter is to inform you that due to the information listed below you may not be on Ann Arbor Public School property for any reason at any time until further notice,” the charges read.

The charges claim that parents obtained this notice because they “refused to comply with the District’s Mask Mandate after being asked a number of times.” The district threatened parents with imprisonment and a fine.

The letter claims parents may be “punished by imprisonment in the county jail for not more than 30 days or by a fine of not more than $250.00 or both at the discretion of the court.” 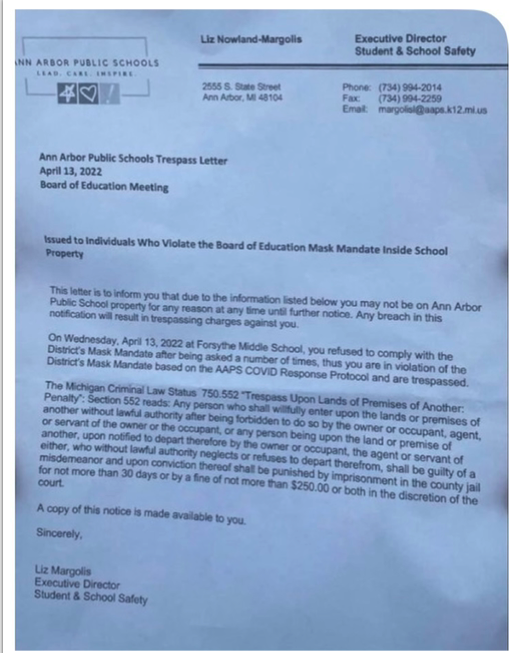 Washtenaw County Health Department rescinded mask mandates in educational settings Feb. 28, according to the county’s website. Yet, the district refuses to comply with the county’s health standards.

On March 23, the AAPS Board of Education underwent a 30-minute recess after 15 people in the audience removed their masks. (RELATED: Here Are All The Ways Michigan Schools Reportedly Used COVID Funds)

Some students in AAPS are fed up with the district’s masking guidelines. On April 4, approximately 15 students staged a protest at Skyline High School and called on the district to end mask mandates.

Soren Nielsen, one of the students who organized the walkout at Skyline, told the Daily Caller that he is frustrated that the district refuses to follow CDC guidelines.

“AAPS pledged to follow the science and CDC guidelines,” Nielsen said. “Now that they’ve refused to follow that guidance, they have left students like me confused and frustrated.”