A sociology teacher in a posh suburb of Chicago reportedly forced students to complete a white privilege self-assessment, according to pictures of the survey posted by parents.

Lake Forest High School students enrolled in a sociology class with Ms. Cindy Collier reportedly underwent an assignment titled, “White Privilege: Unpacking the Invisible Backpack.” The “white privilege test” was adapted from “research on white privilege” by anti-racist activist Peggy McIntosh, according to the test. Students were told to answer “yes or no” to 25 statements.

Statements of white privilege include, “If a traffic cop pulls me over, I can be sure I haven’t been singled out because of my race,” “I can be sure that if I need legal or medical help, my race will not work against me” and “I am sure I will be given curricular materials that testify to the existence of my race.” (RELATED: Maryland Public School Forces 14-Year-Olds To Take ‘White Privilege Test’)

The students’ task was to “create a list of three examples of privilege based on the category assigned to your table: hetero privilege, male privilege, wealth privilege, Christian privilege, able-body privilege, English language privilege.” 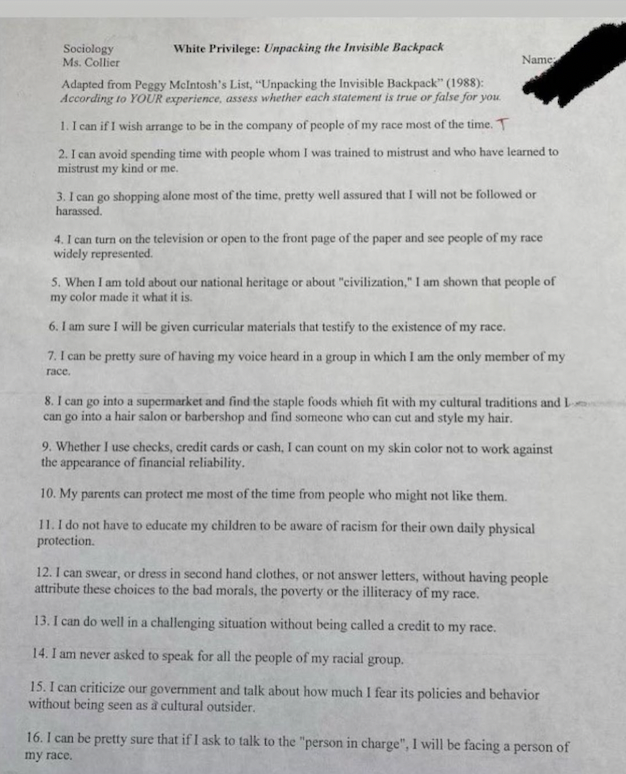 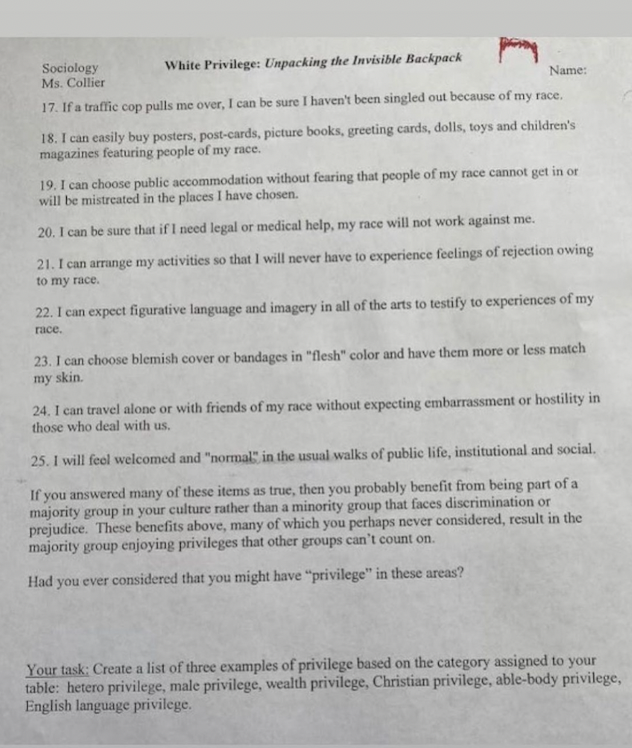 Collier, who is a history and social studies teacher in Lake Forest School District, reportedly gave the assessment to students who live in a very wealthy suburb of Chicago. The median household income in Lake Forest is over $172,000, according to Data USA.

Henry Dolan, an alumnus of Lake Forest High School, told the Daily Caller that he had Collier as a teacher for his junior year of African-American studies. He believes that the “White Privilege” assessment is steeped in critical race theory, an ideology that parses everything through the lens of race.

“If I had this assignment, I wouldn’t complete it,” Dolan said.

Lake Forest High School Principal Dr. Erin Lenart told the Daily Caller the school is in favor of the survey and studying “privilege” in the classroom.

“The study of privilege and systems of privilege in the Lake Forest High School’s elective course, Sociology, is often viewed as a cornerstone to understanding, confirming, or negating socio-economic, socio-cultural, and socio-political facts and institutions,” Lenart said. “As a matter of practice, our Sociology students who choose to take this class have been engaging in this particular lesson for over 5 years.”

This article was updated to include comment from Lake Forest High School.