China’s escalating aggression toward Taiwan, the world’s largest producer of semiconductors, has sounded the alarm among both Democrats and Republicans about what could happen to the U.S.’s economy and national security if China invaded.

Taiwan is the global hub of semiconductor manufacturing, accounting for over 60% of the world’s chip market share, with major nations including the U.S. heavily reliant on the country. Lawmakers and experts highlighted the catastrophic impact a Chinese invasion of Taiwan would have on the U.S. economy and national security due to the effect on semiconductor supply.

“[Taiwan] is home to a company called TSMC, which makes the most advanced logic chips in the world, and it is also … the largest producer of this type of [chip] in the world,” Chris Miller, a visiting fellow at the American Enterprise Institute, told the Daily Caller News Foundation. “So it would take years to replace … the capacity … that Taiwan has been making chips if it were to be knocked offline.”

“In terms of dollar values, the cost would number in the trillions because the impact would be not only felt on semiconductor companies themselves,” Miller said, “but from smartphones to PCs to data centers to … dishwashers, to cars – almost everything we use today relies on semiconductors and a substantial portion of those semiconductors are made in Taiwan.”

TSMC produces upward of 90% of the world’s advanced semiconductors, Reuters reported, while U.S. chip production has declined 25% over the last 30 years, according to the White House.

The White House spoke with U.S. lawmakers earlier this month “to discuss the urgent need to invest in made-in-America semiconductors as well as research and development that will protect our economic and national security,” according to a readout of the meeting. Ohio Sens. Rob Portman and Sherrod Brown also introduced the CHIPS for America Act, which is included in the United States Innovation and Competes Act, in an effort to bolster U.S. semiconductor manufacturing and make the U.S. less dependent on Taiwan.

“When you look at chips, I mean, the chips are in everything,” Tennessee Republican Rep. Mark Green told the DCNF. “We’re talking about a massive disruption of the economy. COVID will look like … chump change compared to a disruption if China were to attack Taiwan because people would be … fighting a war just like they are in Ukraine.”  (RELATED: SPALDING: Russia’s Botched Ukraine Invasion Still Hands China Lessons For Seizing Taiwan)

Green said a Chinese takeover of the semiconductor industry would in the near term cause significant international supply chain and manufacturing disruptions.

“In the long-term, obviously China would control that,” he said. “To think of China economically … who they are as a country – an authoritarian regime led by a coercive and … privacy-violating, freedom-violating, genocidal leader – we’re talking about serious … again disruptions to the supply chain costs.”

“And then you have to think about the national security implications of it,” Green said, “because China would control … the chips that we use in our military weapon systems so … this is a huge threat both economically, for the prosperity of the world, for the prosperity of Americans, and for the national security of Americans.” 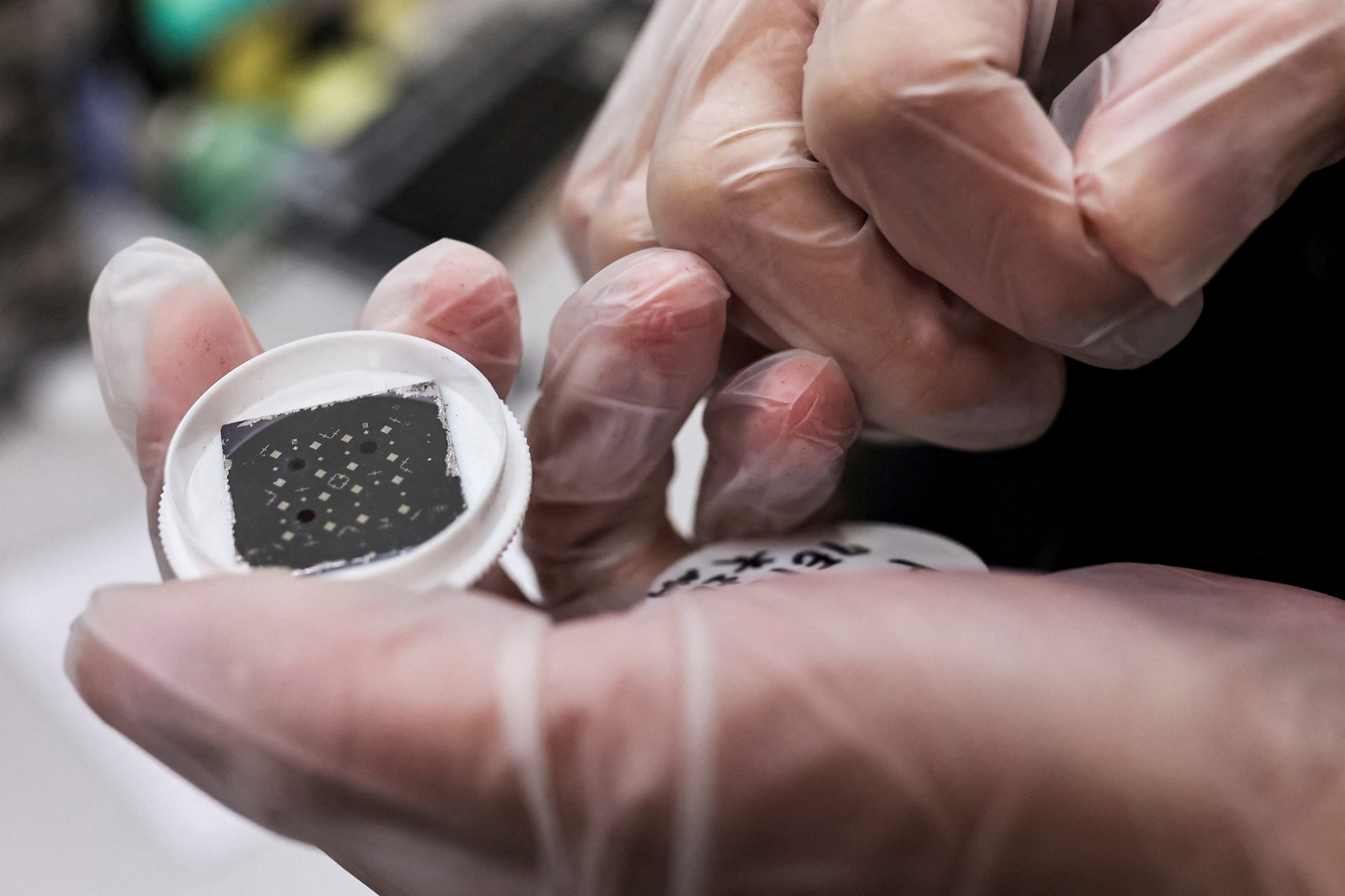 FILE PHOTO: An engineer holds a chip while posing for a photo, he is in the middle of testing reactions from different materials and shapes that can have on the chip at the Taiwan Semiconductor Research Institute (TSRI) in Hsinchu, Taiwan, February 11, 2022. REUTERS/Ann Wang/File Photo

The length of the war would also determine how the industry is affected, according to Dean Cheng, a senior research fellow in the Heritage Foundation’s Asian Studies Center.

“I would analogize it to the impact of the Russia-Ukraine war on wheat, which is to say that … it doesn’t mean the end of wheat production or the end of semiconductor production, but it would be incredibly disruptive,” Cheng told the DCNF. “And, you would probably see significant hikes in prices depending on how long the war lasted and what the impact was.”

“Unlike … the wheat market, it would … vary by the type of microprocessor and semiconductor … because … especially, do you think China continues to trade with the rest of the world?” he said. “Does Chinese chip production stay purely at home, or do they continue to sell to, say Europe, right? Do they sell to South Korea? So, I think all of that would be part of the question.”

Cheng further discussed the impact of a Chinese invasion on the semiconductor industry and in turn U.S. national security, saying “it partly depends on what you think the impact globally is going to be.”

“It really sort of depends on whether you think that this is World War III, in which case we’re talking about massive industrial mobilization, 24-7, three shifts a day,” Cheng said. “You’re going to draw down your microprocessor and semiconductor stocks really fast, right, especially if you don’t think there was any early warning.”