Ohio will hold its primary races on Tuesday to decide which candidates will represent each party in the November midterms.

The Republican primary for the state’s open Senate seat has proven to be highly competitive, with three different candidates leading by slim margins in the polls in the weeks before election day.

Investment banker Mike Gibbons and former state Treasurer Josh Mandel were the apparent frontrunners prior to former President Donald Trump’s April endorsement of author J.D. Vance, whose campaign soared in the polls in the aftermath.

State Sen. Matt Dolan, the only primary candidate not to seek Trump’s endorsement, has also surged in the final days of the race, placing second in a Trafalgar Group poll released Monday. Dolan received 22% of the vote, compared to Vance’s 26%.

Rep. Tim Ryan is the favorite to win the Democratic primary and has already begun to position himself as a moderate for the general election. The congressman lambasted the Biden administration’s stance on mask mandates and rising inflation in a New York Times interview published Monday.

Republican Gov. Mike DeWine is also up for reelection and is facing primary challengers from the right after implementing COVID-19 restrictions that angered many conservatives. At the start of the pandemic, the governor shut down schools, bars and restaurants and postponed the state’s March presidential primary, The Atlantic reported. 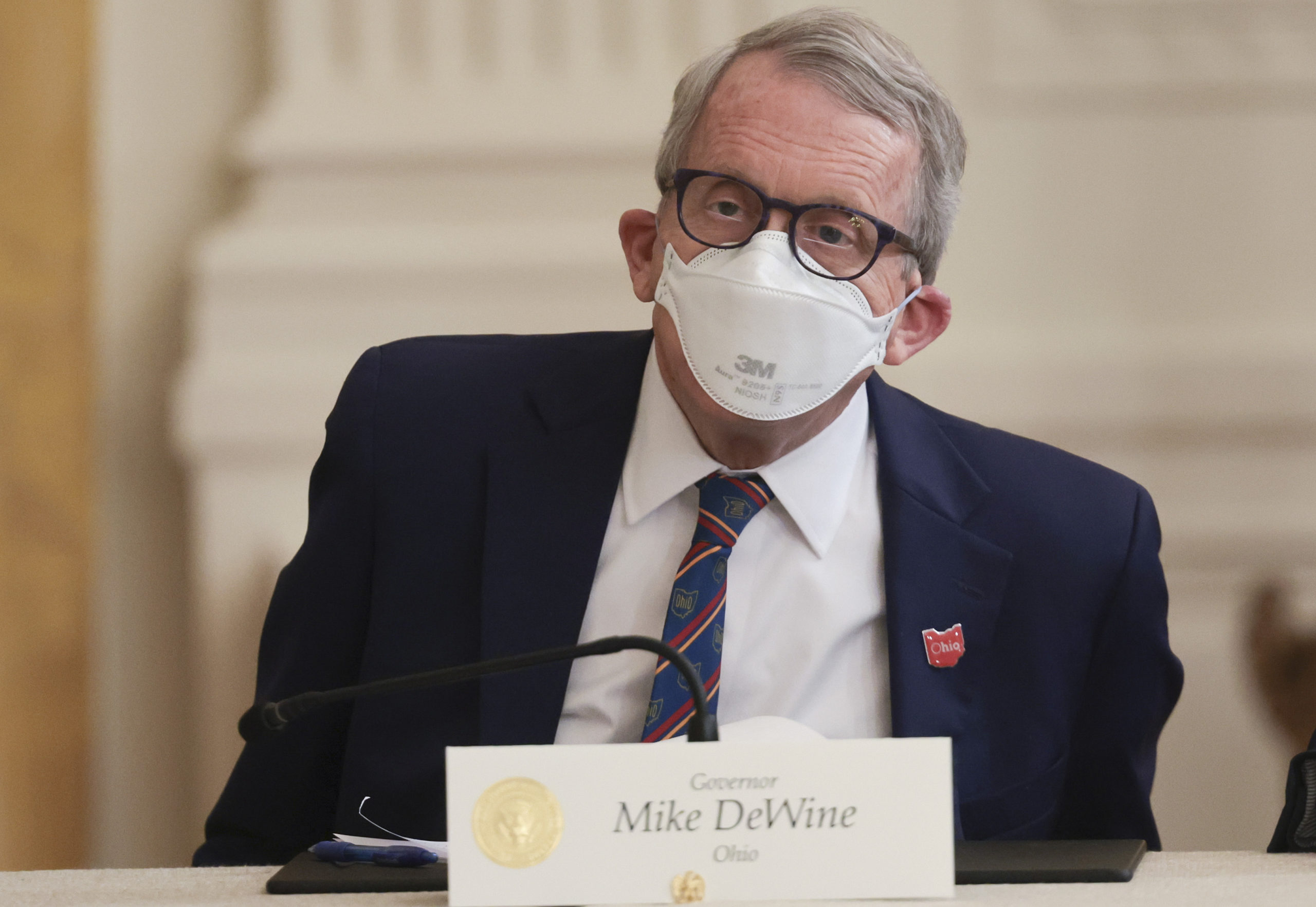 Ohio Gov. Mike DeWine (R) listens as U.S. President Joe Biden speaks during an event at the White House with members of the National Governors Association on January 31, 2022 in Washington, DC. (Photo by Win McNamee/Getty Images)

DeWine, however, has maintained a healthy lead in the polls, in part due to his opponents splitting the vote, The Atlantic reported. The Trafalgar poll found DeWine with a 20-point lead over his closest competitor, Jim Renacci, with 48% of the vote. (RELATED: Here Are The 12 Pivotal Primary Races Of 2022)

Trump chose not to endorse anyone in the race. Before he was banned, Trump tweeted “Who will be running for Governor of the Great State of Ohio? Will be hotly contested!” after DeWine acknowledged President Joe Biden’s victory in the 2020 presidential election, Fox 8 reported.

“He looks at the polls, the people advising him look at the polls as well, and they see that DeWine is going to win that contest hands down,” Paul Beck, professor emeritus of political science at Ohio State University, told Fox 8.

In the House races, former Trump aide Max Miller is campaigning to be the nominee of Ohio’s 7th Congressional District. Miller has a huge cash advantage over his competitors, raising almost $2 million for his campaign as of April 13, Cleveland.com reported.

Left-wing candidate Nina Turner is also making another attempt to become the Democratic nominee for Ohio’s 11th Congressional District, as she was beaten by Rep. Shontel Brown in a December special election, The Hill reported. President Joe Biden, who Turner compared voting for to eating a “bowl of shit,” and Rep. Jim Clyburn have endorsed Brown.

The Trafalgar poll was conducted among 1,081 likely Ohio Republican primary voters between April 29-May 1 with a 3% margin of error.