Students that were forced into remote learning due to school closures experienced significant learning loss, which hurt poor and minority students the most, according to a study conducted by researchers at Harvard’s Center for Education Policy Research (CEPR).

The study looked at the consequences of K-12 hybrid and remote learning over a period of two years, starting in the fall of 2019, and found that students who were in-person for the majority of the 2020-21 school year on average lost about 20% of a year’s worth of math learning, while students who were learning remotely suffered a 50% loss of a year’s worth of math learning in the same time period.

Researchers compared the MAP test results of 2.1 million students in third through eighth grades at almost 10,000 schools in 49 states and Washington D.C. The study broke students into groups based on how much time they spent in the classroom during the 2020-21 school year.

High-poverty schools that were remote for the majority of the 2020-2021 school year suffered the most, losing half a year of achievement growth, which was about twice as much as their counterparts at low-poverty schools in the same districts.

“When districts shifted to remote instruction, students in high-poverty schools were most negatively impacted,” said CEPR Faculty Director Thomas J. Kane, according to a press release announcing the findings. “School districts urgently need to reassess their plans and ensure that the scale of their catch-up efforts matches the magnitude of their students’ losses. If they don’t, we will see the largest widening in educational inequity in a generation.” (RELATED:Biden Says Right To Abortion Comes From Being A ‘Child Of God’)

Students in major cities and blue states were more likely to be forced into remote learning due to Democratic politicians who pushed lockdowns and school closures. Teachers unions also lobbied extensively for remote learning throughout the pandemic.

Cecily Myart-Cruz, the head of Los Angeles’ largest teachers union, denied that lockdowns and remote learning harmed students, claiming “there is no such thing as learning loss.”

“Our kids didn’t lose anything,” she claimed in an August 2021 interview. “It’s OK that our babies may not have learned all their time tables. They learned resilience. They learned survival. They learned critical-thinking skills.” 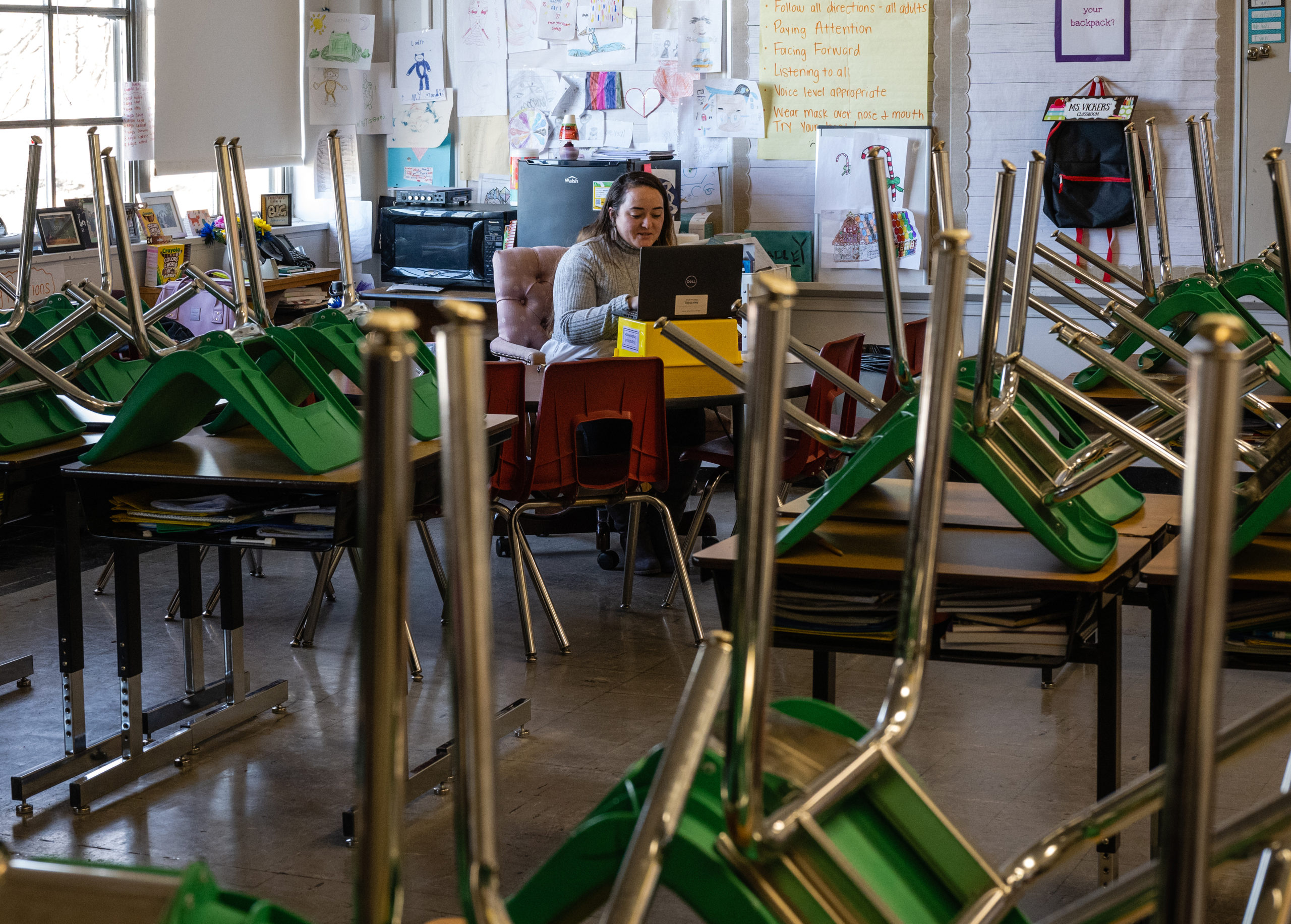 A teacher interacts with students virtually while sitting in an empty classroom during a period of Non-Traditional Instruction (NTI). (Photo by Jon Cherry/Getty Images)

While this aid might be sufficient for districts that were primarily in-person for the 2020-21 school year, high-poverty districts that were learning remotely for much of that year “will need to spend nearly all of their federal aid on academic recovery to help students recover from pandemic-related achievement losses,” the study found. The ARP only requires districts to spend 20% of its funding on students’ academic recovery.

Critics of the ESSER funds don’t think money from the federal relief package has been spent wisely.

Even though American students are struggling with low test scores and proficiency rates as a result of the pandemic, “countless districts across the country have chosen to use ESSER and ARP funds on controversial programming like SEL [social emotional learning], rather than the remediation of COVID-related learning loss,” said Parents Defending Education President Nicole Neily.

“What districts do going forward with the unprecedented federal resources they have will go a long way toward determining how successful we are as a nation at helping students recover from the dramatic effects of the pandemic,” said Dan Goldhaber, the director of CALDER at the American Institutes for Research, according to the press release.