Georgia is seeing a record-breaking turnout of voters ahead of Tuesday’s primary, despite persistent claims from Democrats that the state’s new voting laws were “racist” and would disenfranchise voters.

The stats come after months of claims from Democrats that the new voting legislation, which was signed into law on March 25, 2021, amounted to voter suppression.

But Secretary of State Brad Raffensperger said “the facts have proved me right” that the law would not lead to suppression, according to the report.

“Abrams and President Biden lied to the people of Georgia and the country for political gain. From day one, I said that Georgia’s election law balanced security and access, and the facts have proved me right.”

Patsy Reid, a 70-year-old black woman, told The Washington Post she encountered no issues at the poll despite the rhetoric she heard.

“I had heard that they were going to try to deter us in any way possible because of the fact that we didn’t go Republican on the last election, when Trump didn’t win,” Reid reportedly said. “To go in there and vote as easily as I did and to be treated with the respect that I knew I deserved as an American citizen – I was really thrown back.”

The law, known as The Election Integrity Act of 2021, includes several provisions expanding voting opportunities. While the original drafts of the legislation would have scrapped all weekend voting aside from the second Saturday, changes were made mandating “two Saturday voting days and two optional Sunday voting days” prior to the general election.

The legislation also requires three weeks of early voting and expands the hours the polls are open. The changes were made in response to opposition from racial justice groups who said the original drafts targeted black voters who traditionally participate in “Souls to the Polls” voter drives that take place on Sundays, according to NPR. 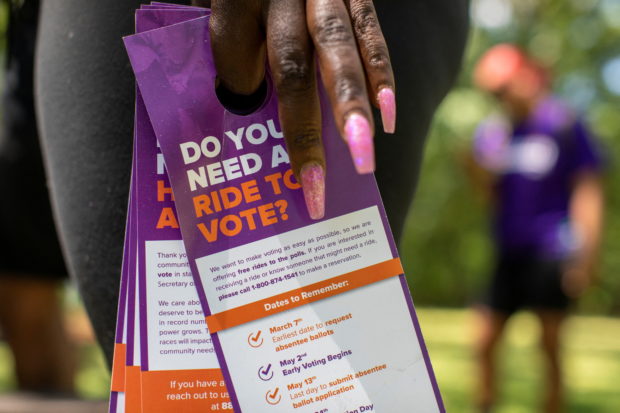 A member of the New Georgia Project carries informative paperwork before heading out to knock on doors as they canvas to encourage people to register to vote in Atlanta, Georgia, U.S., May 12, 2022. Picture taken May 12, 2022. REUTERS/Alyssa Pointer

The law also cracked down on “line warming,” which prevents individuals from handing out gifts, water or food to voters waiting in line to vote. After the legislation was passed, President Joe Biden said “if you want any indication that [the law] has nothing to do with fairness, nothing to do with decency, they passed a law saying you can’t provide water to people standing in line while they’re waiting to vote,” according to The Hill.

Voters may still bring their own food and water, and poll officers can still make “available self-service water from an unattended receptacle to an elector waiting in line to vote.”

The law also requires voters to show an ID to get an absentee ballot. At least 35 other states require voters to show or present some form of ID when voting, whether it be by mail or in person. The state already had voter ID laws in place for in-person voting. (RELATED: Less Than 10,000 Georgia Voters Have No Form Of ID Associated With Their Registration)

And while the controversial aspects of the legislation were removed, that didn’t stop Democrats from saying that the legislation amounted to “Jim Crow 2.0” and launching an all-out assault on the law.

After the legislation was signed into law, Biden called it “Jim Crow in the 21st century” in March of 2021.

“Republicans in [Georgia] rushed through an un-American law to deny people the right to vote,” Biden said. “This law, like so many others being pursued by Republicans in statehouses across the country is a blatant attack on the Constitution and good conscience.”

Jon Luke Young, manager for the Get Out the Vote department of the New Georgia Project, speaks with canvassers while assigning them routes to knock on doors in Fulton County to encourage people to register to vote in Atlanta, Georgia, U.S., May 12, 2022. Picture taken May 12, 2022. REUTERS/Alyssa Pointer

“This is Jim Crow in the 21st Century. It must end,” Biden said. “We have a moral and Constitutional obligation to act.”

“Jim Crow 2.0 is about two insidious things: voter suppression and election subversion. It’s no longer about who gets to vote; it’s about making it harder to vote.”

Biden then compared Republicans to segregationists.

Biden was also given four Pinocchios by The Washington Post after he said the law “ends voting hours early so working people can’t cast their vote after their shift is over.”

The law permits polling places to be open from 7 a.m. to 7 p.m., and as long as a voter is in line by 7 p.m. then voters may still cast their vote.

The Biden administration went as far as suing the state in June.

Major League Baseball (MLB) pulled the 2021 All Star Game out of Atlanta in response to the law.

“Major League Baseball fundamentally supports voting rights for all Americans and opposes restrictions to the ballot box,” the organization said in a statement.

The move came after Biden himself called for MLB to pull the game.

Actor Will Smith pulled his production of “Emancipation” out of the state in response to what he said were “newly enacted voting restrictions.”

The president then used the debate surrounding the bill to try and convince Americans that it was of the utmost necessity to scrap the filibuster so that Democrats could nationalize election laws.

Speaking in Georgia in January, Biden said he believed “the threat to our democracy is so grave that we must find a way to pass these voting rights bills, to bake them in, vote and let the majority prevail. And if that bare minimum is blocked, we have no option but to change the Senate rules, including getting rid of the filibuster.”

Biden’s election bills, the Freedom to Vote Act and the John Lewis Voting Rights Advancement Act, would nationalize federal election laws by allowing the Department of Justice (DOJ) to strike down state-level procedures if it deems them discriminatory.

Critics argue the laws would be unconstitutional as the Constitution requires the federal government to defer to a given state’s voting laws. Biden cited Georgia’s voting laws as an example of what the DOJ could strike down.