A fourth grade boy who survived the Uvalde, Texas, shooting Tuesday said the gunman fatally shot a classmate when she called out for help after an officer told students to “yell” if they needed help, according to a report.

The unidentified fourth grader recounted the horrific scene in an interview with KENS 5.

“He shot the next person’s door. We have a door in the middle. He opened it. He came in and he crouched a little bit and he said, he said ‘it’s time to die,'” the student reportedly said.

“When I heard the shooting through the door, I told my friend to hide under something so he won’t find us. I was hiding hard. And I was telling my friend to not talk because he is going to hear us.”

The boy said he and four other classmates hid under a table that was covered by a tablecloth, possibly obscuring their location from the gunman.

“When the cops came, the cop said: ‘Yell if you need help!’ And one of the persons in my class said, ‘help.’ The guy overheard and he came in and shot her,” the student said. “The cop barged into that classroom. The guy shot at the cop. And the cops started shooting.”

The boy said once the sound of shooting stopped he “opened the curtain” and “just put” his “hand out.” (RELATED: ‘He’s In The School!’: Texas Shooting Witness Details How Suspect Crashed Truck Before Running Into Elementary School)

“I got out with my friend. I knew it was police,” the student said, according to KENS 5. “I saw the armor and the shield.” The boy said that several teachers “went in front” of his “classmates” to “save them.”

A man whose nephew survived the shooting told the Daily Caller how his nephew witnessed his friend and teacher get shot. 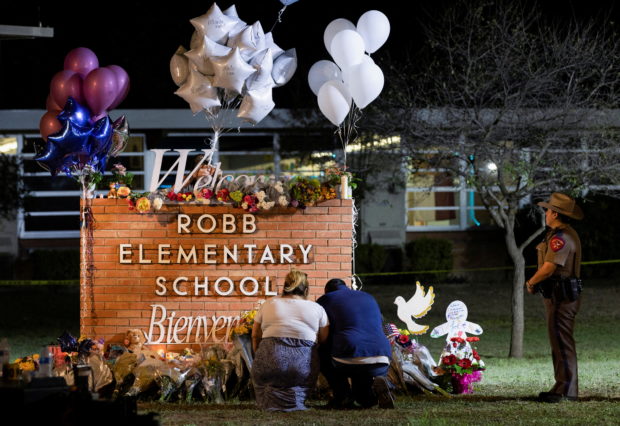 Stephanie and Michael Chavez of San Antonio pay their respects at a makeshift memorial outside Robb Elementary School, the site of a mass shooting, in Uvalde, Texas, U.S., May 25, 2022. REUTERS/Nuri Vallbona

“My nephew was in the class, he was actually in the classroom across the hallway from where the gunman went in,” the man explained. “What he told us is that he actually saw the teacher get hit and saw his friend get shot in the face.”

Ramos allegedly then posted “I shot my grandmother” before posting “I’m going to shoot an elementary school” just 15 minutes before carrying out the deadly attack.

Ramos barricaded himself in a classroom before opening fire, killing at least 19 students and two teachers.