Ashley Beattie is desperate. With an eight-month-old boy, she was struggling to feed her child since the baby formula shortage. She will now be even more burdened by the increasing deficit of feminine hygiene products.

“I feel stressed. It’s hard, it’s a lot of money being taken out of pocket,” the low-income mother told The Texas Tribune. Beattie is one of millions of women now suffering under yet another supply chain challenge, one that seems to be hitting the most vulnerable Americans. Meanwhile, the ongoing lack of childcare services hasn’t improved in years.

Mothers nation-wide are struggling to provide sufficient nutrition for their infants after Abbott Nutrition’s Sturgis factory was shut down in February. At the peak of the crisis in April, 56% of the regular supplies were out of stock one day, the retail software company Datasembly reported. One week averaged a roughly 43% out-of-stock rate across the country for baby formula and the unavailability remained high for weeks. (RELATED: Another Crisis: Nationwide Baby Formula Shortage Puts The Squeeze On Parents) 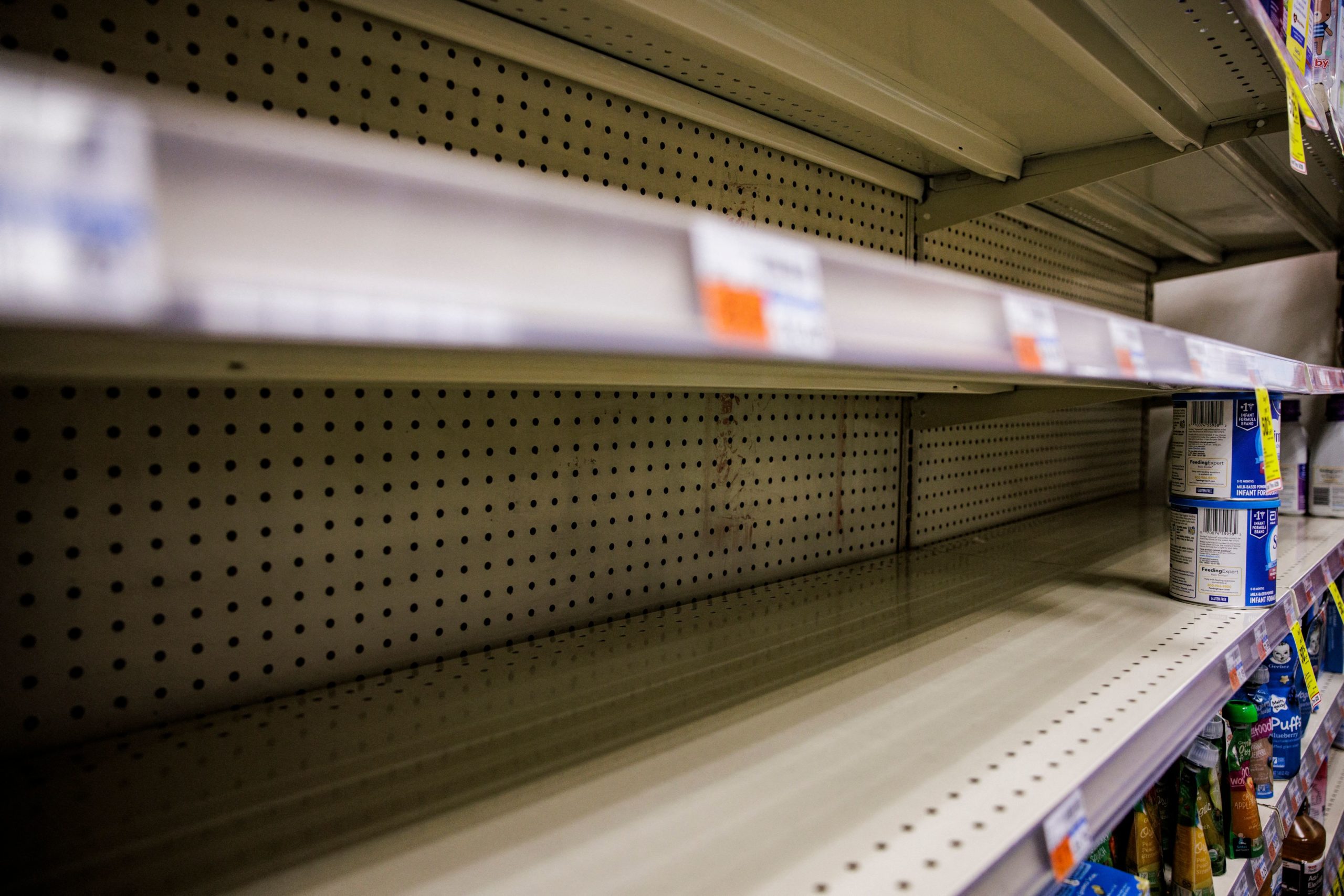 Shelves normally meant for baby formula sit nearly empty at a store in downtown Washington, DC, on May 22, 2022. A US military plane bringing several tons of much-needed baby formula from Germany landed on May 22, 2022, at an airport in Indiana as authorities scramble to address a critical shortage. (Photo by Samuel Corum / AFP via Getty Images)

Some mothers were forced to allocate several hours on multiple days just to find suitable food for their babies, The New York Times reported. This is not possible for most low-income families, as many mothers often work multiple jobs. They also lack health insurance and work in fast-food, retail or low-earning jobs that don’t provide spaces or time to breastfeed. Low-income mothers use baby formula more than higher-income households, according to the National Library of Medicine. Mothers from lower-earning households stop to breastfeed sooner too in order to return to work.

Director of the National Economic Council Brian Deese said the Biden administration knew of the shortage since February, two months before the peak of the shortage.

Shortly after the baby formula shortage first started developing, women began to face a new shortage: tampons and feminine hygiene products. This shortage again is marked by a vulnerable supply chain. Similar to the baby formula market, there are few companies involved in the production of feminine hygiene products. Proctor&Gamble makes up almost 50% of the market, and they raised their prices again, just after they did so the previous year, The Washington Post reported. (RELATED: Media Laments Tampon Shortage’s Effect On ‘People Who Menstruate’)

The great tampon shortage of 2022 is the supply chain problem no one’s talking about https://t.co/GMiAe4GUP0

A combination of the shortage of raw materials, a deficit of labor and the rising transportation costs due to sky-rocketing fuel prices contributed to empty shelves in the feminine care products aisle, The Post reported. Tampons are difficult to produce since they involve a variety of raw materials. Some companies point to the lack of cotton, rayon, and plastic, The Post reported. These materials have been increasingly used to quickly produce essential medical equipment to fight the pandemic. Now, they are missing to produce tampons.

Women spend $150 million on period products a year, and the average price for a box of tampons has increased by 10% this year alone, data from NielsenIQ shows. For a single woman, the costs amount to $1,773 in her lifetime for tampons, and $4,752 if she is using pads, according to Pandia Health, an online birth control service. 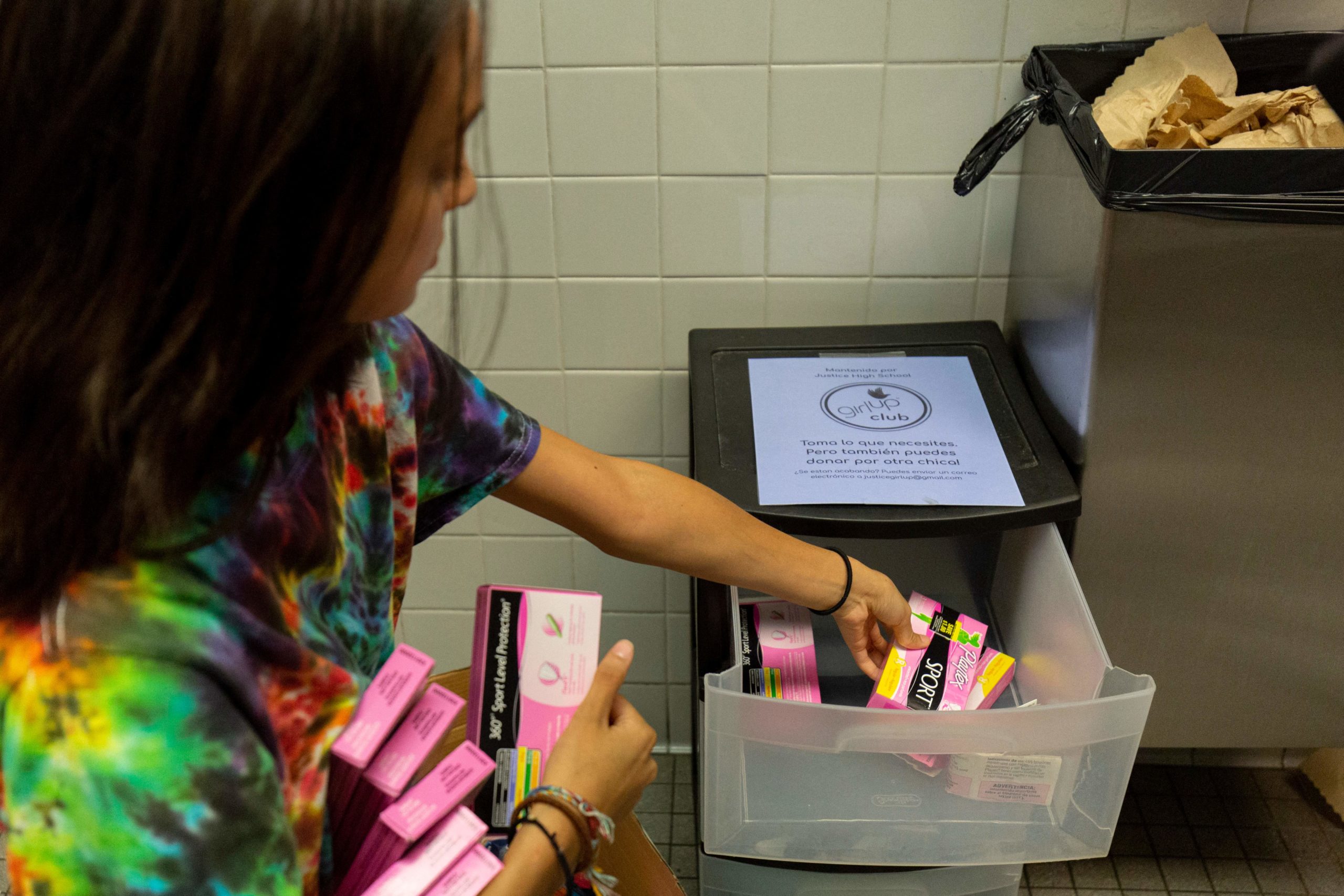 A student of the “Girl Up” club stocks a school bathroom with free pads and tampons to push for menstrual equity, at Justice High School in Falls Church, Virginia, on September 11, 2019. (Photo by Alastair Pike / AFP via Getty Images)

Corporate companies, as well as nonprofit organizations, have been struggling with their product distribution. “Suppliers haven’t been able to fulfill the full orders placed by the company,” CVS told NPR. Dana Marlowe, a founder of a non-profit providing low-income women with hygiene products, has witnessed a lack of donations for multiple months. They had double the amount of tampons the previous year by this time, NPR reported.

In the meantime, mothers still have to deal with the aftermath of the pandemic that took away options for childcare. In the first months of the pandemic, approximately 3.5 million mothers suspended their job to take care of their children, according to the Census Bureau and Bureau of Labor Statistics. This resulted in unpaid leave or losing their job altogether. One out of every nine places for children is still missing due to a shortage of staff, according to the 19th, a nonprofit news service focusing on gender, politics and policy. This forces mothers to stay home, preventing them from earning much needed money. (RELATED: Biden’s Childcare Plan Disregards Lower, Middle Class Families Who Don’t Want Daycare, Experts Say)

Even Democratic senators are aware of the urgency of the matter: “The child care sector is on the brink of collapse and we have to act now to save it—or families across the country will pay the price,” said Democratic Washington Sen. Patty Murray. “If we want to build communities and an economy where every family can thrive, we must ensure that parents aren’t locked out of the workforce because they can’t find affordable care for their kids,” Senator Kaine added.

Murray and Kaine proposed a new plan in May to reshape childcare services, according to HuffPost. 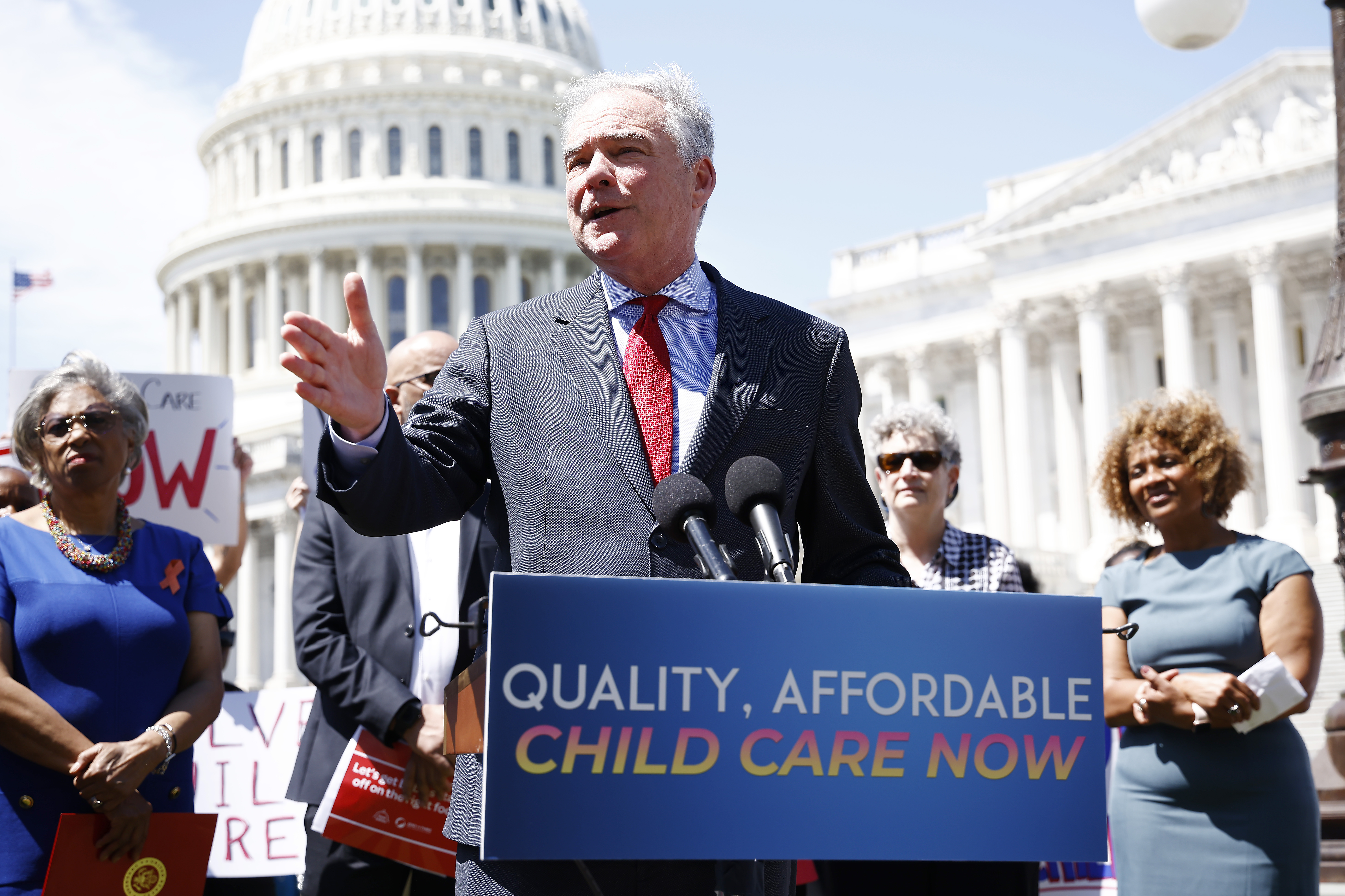 Low-income women face all these challenges on top of the ongoing inflation and rising gas and grocery prices. Women are resorting to cutting their children’s food portions or using household materials such as tape and cardboard to handle their menstruation, NYT and NPR reported. And there seems to be no end in sight.