If young American girls need less of anything, it’s role models defending their autonomy and success in male dominated environments… said no one, ever.

You’re forgiven if you don’t know this haggard scold. She was popular for about ten minutes when she played soccer quite well, but since there are probably more Americans who eat their own boogers than watch soccer, Rapinoe lives in a virtue-signaling state of social pivoting to maintain her popularity in the public eye.

For the most part, I think Rapinoe is a pointlessly polarizing waste of oxygen, but her most recent comments struck something inside of me that brought out my inner female Welsh rage like no one before. A biological female, Rapinoe decided to defend biological males competing in female sports. 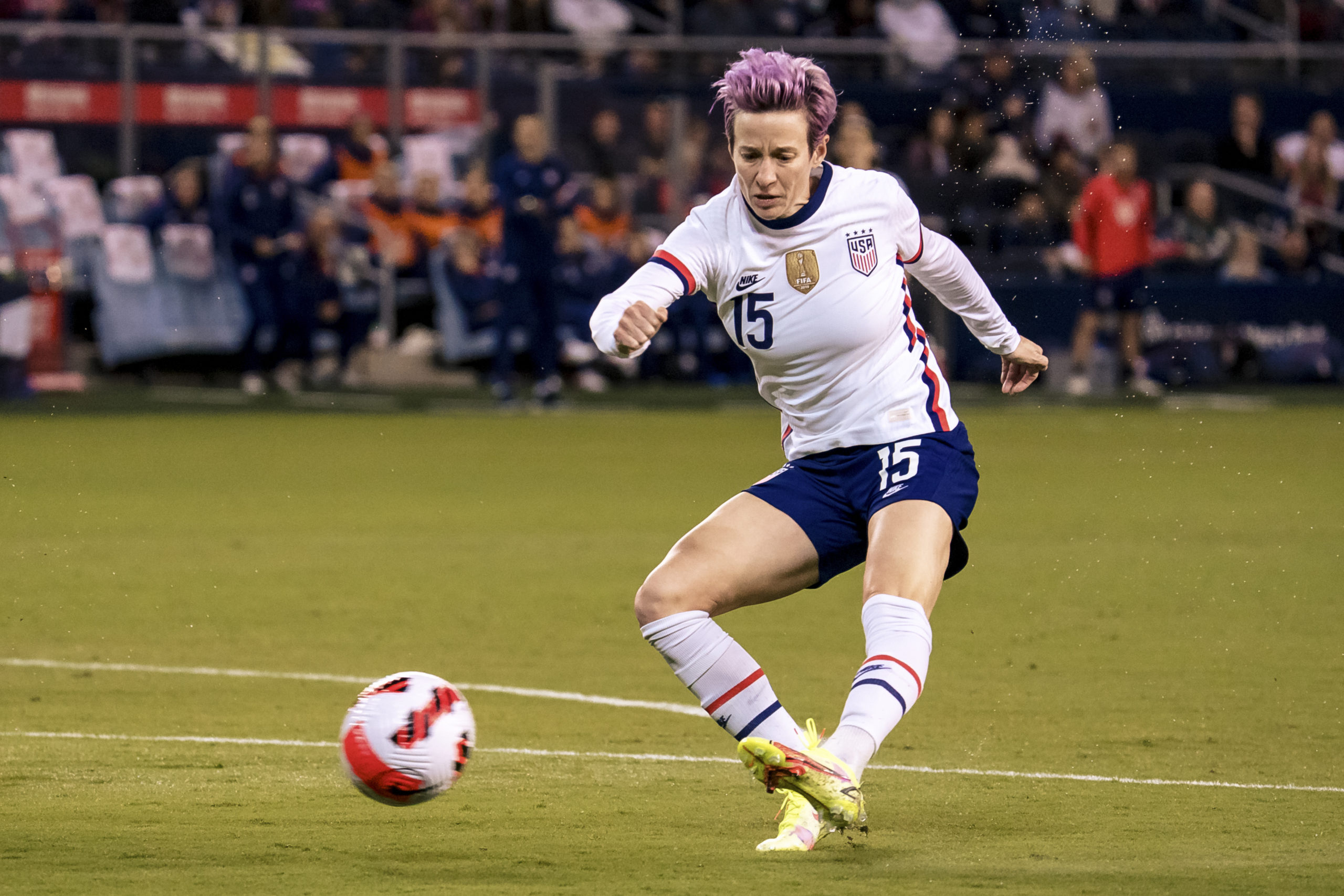 KANSAS CITY, KS – OCTOBER 21: Megan Rapinoe #15 of United States takes a shot at the Korea Republic goal during the first half of the International Friendly match at Children’s Mercy Park on October 21, 2021 in Kansas City, Kansas. (Photo by Kyle Rivas/Getty Images)

To cement her point, Rapinoe emphasized that “your kid’s high school volleyball team just isn’t that important. It’s not more important than any one kid’s life.” Personally, if my child were threatening to kill themselves over not being able to do sports, I’d probably get them mental health care before a soccer kit.

Call me crazy, but we all know I’m not in this context.

So let’s break down why Rapinoe’s comments were borderline evil: firstly, if some lady 20+ years ago had said what Rapinoe just said, this purple-haired woke mouthpiece wouldn’t have had a career in professional sports. Secondly, women’s soccer would be played by men with fake boobs, and she’d be working in middle management or driving for a ride share company.

Sadly, I’m not surprised Rapinoe would say something so horribly heartbreaking to America’s daughters. This is the same woman who stepped on the American flag, helped destroyed Victoria’s Secret and allegedly “almost bull[ied] her own teammates to kneel during the anthem. Disrespect is her middle name, and it’s hyphenated with spoiled, privileged and nasty.

She’s really gone too far in her utter disregard for just how difficult it is to be taken seriously as a woman in any capacity, but particularly in athletics. She basically hiked Everest by normalizing not just soccer, the most boring game ever, but women’s soccer. Instead of helping others to the summit, she decided to blow up base camp and stop anyone else from reaching her position.

Look, I seriously don’t care if an adult is transgender, but there is a special place in Hell for women who don’t support other women, which is ultimately what Rapinoe did with her comments. (RELATED: Comedian Alex Stein Attends City Council Meeting In Women’s Swimsuit, Claims To Be Trans)

At this point, I would love to interview Rapinoe, but it would be such a short conversation. My only question would be: why do you keep saying such stupid, hurtful sh*t  that makes it harder to be taken seriously as a woman? Oh, and before you say anything, I clearly wore purple hair better than her.

Shame on you, Megan Rapinoe. Give your balls a tug and grow up. We’re either in this together, or you’re on your own.