Giammattei said smugglers know it’s easier to get people into the U.S. illegally under the Biden administration as a family, and that smugglers have used children, whether biological or not, in order to get their clients across the border. He mentioned the Biden administration’s effort to codify the Deferred Action for Childhood Arrivals (DACA) program, which prevents migrants brought to the U.S. as children from being immediately deported, as exacerbating the problem.

“Right now there has been confusion with the messages. When they say we are going to codify all the children who have their parents here, what the coyotes say there is not convenient for them [the migrants]. ‘Let’s see. Grab the children and come,’ That child may be related, he may not be related. Wanting a child is the coyotes’ way of manipulating people,” Giammattei told TheDCNF.

The Biden administration in May 2021 reversed DNA testing of migrants, a policy Trump introduced in September 2020, according to CNN. When the policy was introduced it intended to expand biometric and DNA testing that “guards against identity theft and thwarts fraudsters who are not who they claim to be,” former Deputy Department of Homeland Security (DHS) Secretary Ken Cuccinelli said.

Giammattei said smugglers are exploiting the lack of checks on families, bringing in people who aren’t related as family units when they cross the U.S.-Mexico border.

In 2019, Cucinelli said that a pilot program for DNA testing of migrants had found about 30% of families to be “fake” and not actually related, according to the Austin American-Statesman.

Giammattei also warned the Biden administration against lifting Title 42, the public health order used to quickly expel migrants. The Centers for Disease Control and Prevention (CDC) announced on April 1 that the policy would end on May 23; however, after several states led by Arizona Attorney General Mark Brnovich brought a lawsuit against the administration, a federal judge paused the policy’s end.

Meanwhile, 49,432 were processed under Title 8, which is applied to certain migrants who cross illegally into the United States that can’t establish a legal basis for being in the U.S.

“We are very concerned about the lifting of Title 42. I can tell you that. That worries me a lot. For example, the moment Title 42 is lifted, you will see a flood of people trying to reach the United States,” Giammattei added.

Giammattei said he worries about the potential security risks of open migration, saying that the Biden administration hasn’t provided Guatemala with the necessary tools to identify possible threats within groups crossing through his country. The U.S. continues to flag dozens of illegal aliens on its terrorist database in 2022, including 15 people in May.

“In the last few weeks, we have returned maybe a dozen people from the U.S. that have records of sexual crimes with children here in the U.S. When we have that database, when they try to enter into Guatemala… If that exists, then what we have to do is to put it in the field at the borders in the land borders in the blind areas, so we’re sure that these aren’t people that don’t belong to organized crime,” he said. 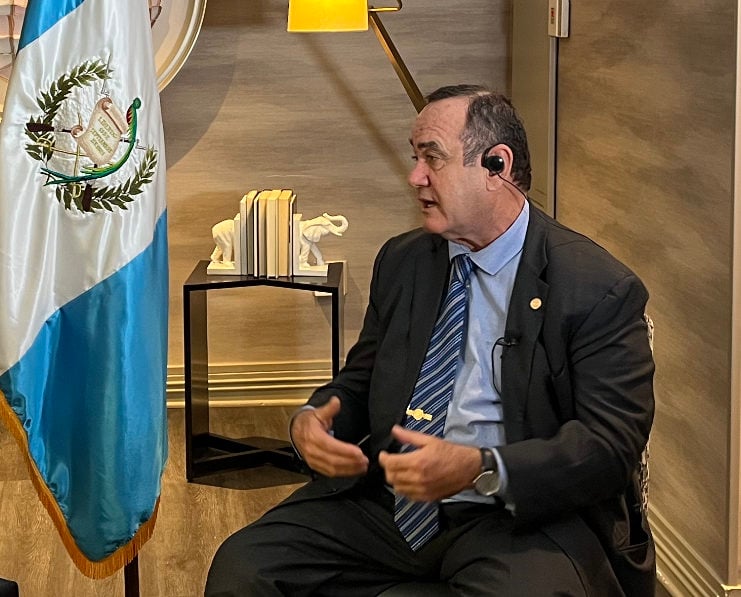 Giammattei met with DHS Secretary Alejandro Mayorkas before he sat down with TheDCNF. The two discussed the need for increased cooperation between their countries to combat immigration issues, such as cartels and human trafficking organizations, Giammattei said. (RELATED: ‘Afraid Of My Country’: Here Are The Most Shocking Things I Saw In My Night At The Border)

“It was a good meeting,” Giammattei said, adding “There are many things to be done still.”

With Guatemala’s need for better intelligence, Giammattei said he brought up his concerns about the lack of technology used to identify potential criminals in the migration waves passing through Guatemala, adding that authorities in the country can only do so in the airports. He said Guatemala relies heavily on the U.S. to flag threats once they’ve already crossed.

A DHS spokesperson told TheDCNF that while the two discussed bilateral relations, Mayorkas also emphasized the importance of fighting corruption.

“He also noted the ongoing collaboration with Guatemalan counterparts to combat human smuggling, and manage regional migration, including the promotion of legal migration pathway,” the spokesperson said. “The Secretary emphasized the importance of Guatemala controlling its borders in order to deter irregular migration, combat child smuggling, and ensure vulnerable populations are afforded the migration and protection services they need.”

The White House didn’t respond to TheDCNF’s request for comment.