The Biden administration proposed a rule that would require the states to track greenhouse gas emissions and set declining emission targets for highway traffic on Thursday.

The Department of Transportation’s Federal Highway Administration (FHWA) announced a Notice of Proposed Rulemaking (NPRM) for states and municipalities to “track and reduce greenhouse gas emissions on their highways.” The proposed plan would establish declining carbon dioxide targets statewide and create a method for the monitoring and reporting of greenhouse gas emissions.

“The Transportation Department’s proposed rule to force states to regulate CO2 emissions from vehicles on highways is preposterous because it has no basis in law,” Myron Ebell, director of the Competitive Enterprise Institute’s Center for Energy and Environment, told the Daily Caller News Foundation.

Under the proposed system, state DOTs and Metropolitan Planning Organizations will be required to set declining targets for on-road emissions generated by vehicles on the National Highway System (NHS).

However, no particular target is being set by this rule, as long as it aligns with the net-zero targets directed by the President in two Executive Orders and agreed upon at the International Leaders Summit on Climate.

“The authority claimed is based on two Executive Orders signed by President Biden last year and the International Leaders Summit on Climate. None of these has any legal authority, ” Ebell continued. 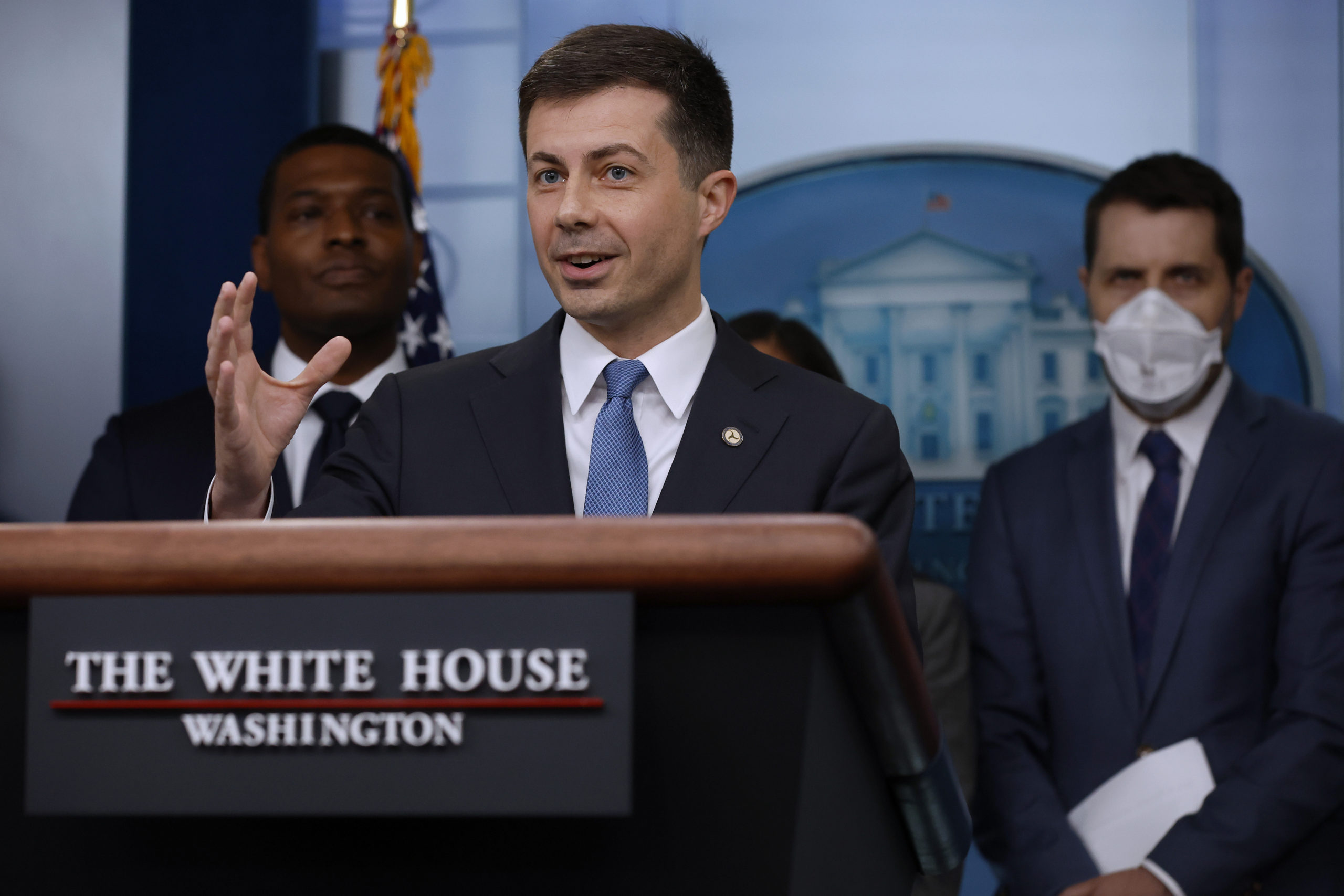 WASHINGTON, DC – MAY 16: Transportation Secretary Pete Buttigieg (C) speaks during a news conference marking six months since the signing of the bipartisan infrastructure bill with Environmental Protection Agency Administrator Michael Regan (L) and National Economic Council Director Brian Deese in the Brady Press Briefing Room at the White House on May 16, 2022 in Washington, DC. The Biden Administration cabinet members highlighted what they considered the successes of the infrastructure law. (Photo by Chip Somodevilla/Getty Images)

“The only law passed by Congress that gives [the Department of] Transportation a role in climate policy was last year’s infrastructure bill,” Ebell said.

“It authorizes the department to work with state agencies to develop programs to reduce CO2 emissions, such as better traffic flow and EV charging stations at freeway rest stops. It says nothing about mandated emissions cuts that align ‘with the Administration’s net-zero targets’…Congress has not passed any such net-zero target, ” he stated.

The plan comes as part of President Joe Biden’s firm commitment to fighting climate change and transforming the U.S. into a green energy economy.

The proliferation of electric vehicles is a critical part of Biden’s climate agenda and is referenced in the rule’s docket. The docket states that a potential benefit of the rule is it will encourage more Americans to buy electric cars.

“The potential benefits that may flow from the proposed greenhouse gas measure stem from its potential to support more informed choices about transportation investments and other policies to help achieve net zero emissions economy-wide by 2050, including projects eligible under the Carbon Reduction Program and the National Electric Vehicle Infrastructure Program, both established under the Bipartisan Infrastructure Law,” the docket states.

The White House did not immediately respond to the DCNF’s request for comment. The DOT referred the DCNF to its press release issued on Thursday.