Parents need “total transparency” and access to their children’s education if they wish to end indoctrination in the classroom, former Secretary of Education Betsy DeVos told the Daily Caller News Foundation in an exclusive interview.

The K-12 education system is failing to adequately prepare students because classrooms are often focused on promoting left-wing ideas behind parents’ backs, DeVos told the DCNF. To combat this, DeVos said Republicans and parents should work to promote educational freedom and curriculum transparency so parents can make informed decisions about their child’s education. (RELATED: Betsy DeVos Blasts CRT, Encourages Parents To ‘Speak Up’ When They See It In Schools)

“There’s been a move to ban [Critical Race Theory], wokeism, etc.; but banning it is not going to solve the problem because they will still find a way to get around whatever the ban is and reintroduce something under another name,” DeVos told the DCNF. “That’s why curriculum transparency and really demanding full-on openness on what is going on in every child’s classroom within a particular school or district, I think, is one area in which some states have advanced legislation.”

Republicans and parents groups nationwide have sounded the alarm over the teaching of Critical Race Theory (CRT) as well as certain elements of gender ideology to K-12 students, which they argue indoctrinates children into left-wing ideology.

DeVos said if parents were exposed to what was happening in schools, they would take control of their child’s education. 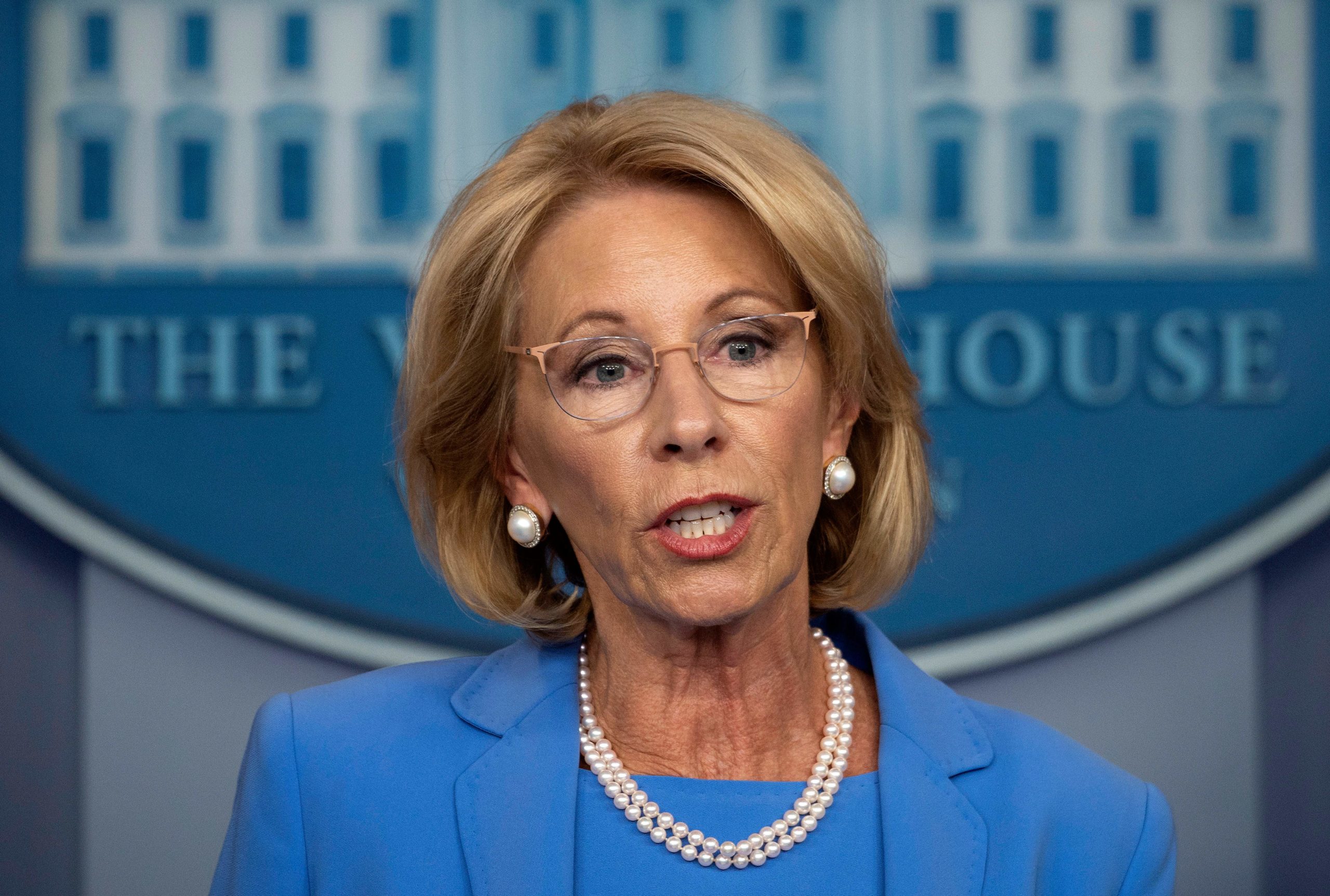 US Secretary of Education Betsy Devos speaks during the daily briefing on the novel coronavirus, COVID-19, in the Brady Briefing Room at the White House on March 27, 2020, in Washington, DC. (Photo by JIM WATSON / AFP) (Photo by JIM WATSON/AFP via Getty Images)

“If you have total transparency to what is going on in classrooms, I can’t imagine there’s a high percentage of parents that think something like that is an okay thing to be exposing young kids to,” DeVos said. “Instead, they should be actually teaching kids how to read and how to write and how to do mathematics. They should be helping kids learn versus exposing them to a whole agenda-driven experience that is antithetical to many, many families, values and perspectives.”

In June, the Biden administration proposed revisions to Title IX to extend discrimination protections in federally-funded schools to the categories of “sexual orientation” and “gender identity.” The proposed changes to Title IX would allow anyone who identifies as a woman into every sex-separated space, program, building, bathroom and locker room, legal experts previously told the DCNF.

Title IX is a key point of reform for Republicans, DeVos told the DCNF. If the Biden administration continues with their proposed changes to Title IX it will “critically injure if not kill women’s sports.”

“I can’t imagine I would have spent nine years swimming competitively if I knew that in addition to really great female competition, I was also going to potentially have to deal with biological male competition,” DeVos told the DCNF. “You think about all the time and everything that you invest into becoming good at your sport, and then having that as an overhang; it would fundamentally change women’s sports.”

DeVos released a book on June 21 titled “Hostages No More” that discusses her ideas to undo damage to the American education system, and draws on experiences from her time in the Trump administration.

“Creating an education freedom environment will totally change the dynamics around K-12 education. If people can vote with their feet and go somewhere else, then all education providers need to become responsive,” DeVos told the DCNF. “This is, in my view, the most important thing we can do to fundamentally change and improve K-12 education.”