Although Friday’s jobs report seemed like good news for a beleaguered economy and President Joe Biden, the report’s potential methodological issues as well as the economy’s negative growth indicate that a recession is still on the horizon, according to an economist at The Heritage Foundation.

The U.S. Bureau of Labour Statistics’ job report for June, released on Friday, soothed some fears that the U.S. economy might be approaching a recession. However, negative GDP growth, rampant inflation and methodological issues within the report indicate that a recession is looming, according to E.J. Antoni, a research fellow for regional economics at The Heritage Foundation. (RELATED: US Economy Smashes Jobs Projections Despite Signs Of Recession)

“There have been a lot of warning signs of a recession, we’ve seen a lot of different data points and once you adjust them for inflation, a lot of what we thought was robust growth in the economy is either anemic or it’s not even growth at all,” Antoni told the Daily Caller News Foundation.

Antoni pointed to negative GDP growth in the first quarter of 2022 and the likelihood of a second negative quarter.

“The overall economic woes of the country seem like they stem entirely from the bad policies of this administration,” he said.

Although the report exceeded economists’ projections due to the addition of 100,000 more jobs than most estimates had forecasted, Antoni did not express optimism.

“Employment is lagging behind other economic indicators right now in the lead-up to this recession,” said Antoni.

Antoni also examined the methodology of the report’s primary surveys and the danger of double-counting job numbers.

“The line that we added 100,000 [more] jobs this month comes from the establishment survey; the unemployment rate numbers come from the household survey,” Antoni explained. “They have slightly different methodologies, and you can’t make one-to-one comparisons.”

The establishment survey is designed to measure employment, hours and earnings in the nonfarm sector, while the household survey is designed to measure the labor force status of the civilian population, according to the BLS. The household survey also provides a measure of employed people, including both agricultural workers and the self-employed, which the establishment survey does not.

“The number of full-time employees is down 70,000 since March,” Antoni noted. “We’ve lost several hundred full-time jobs a day for the last three months.”

“Once you account for the potential double-counting from the establishment survey and multiple job holders going up so much, you’re left with only a 59,000 job increase for the month of June,” Antoni told the DCNF. 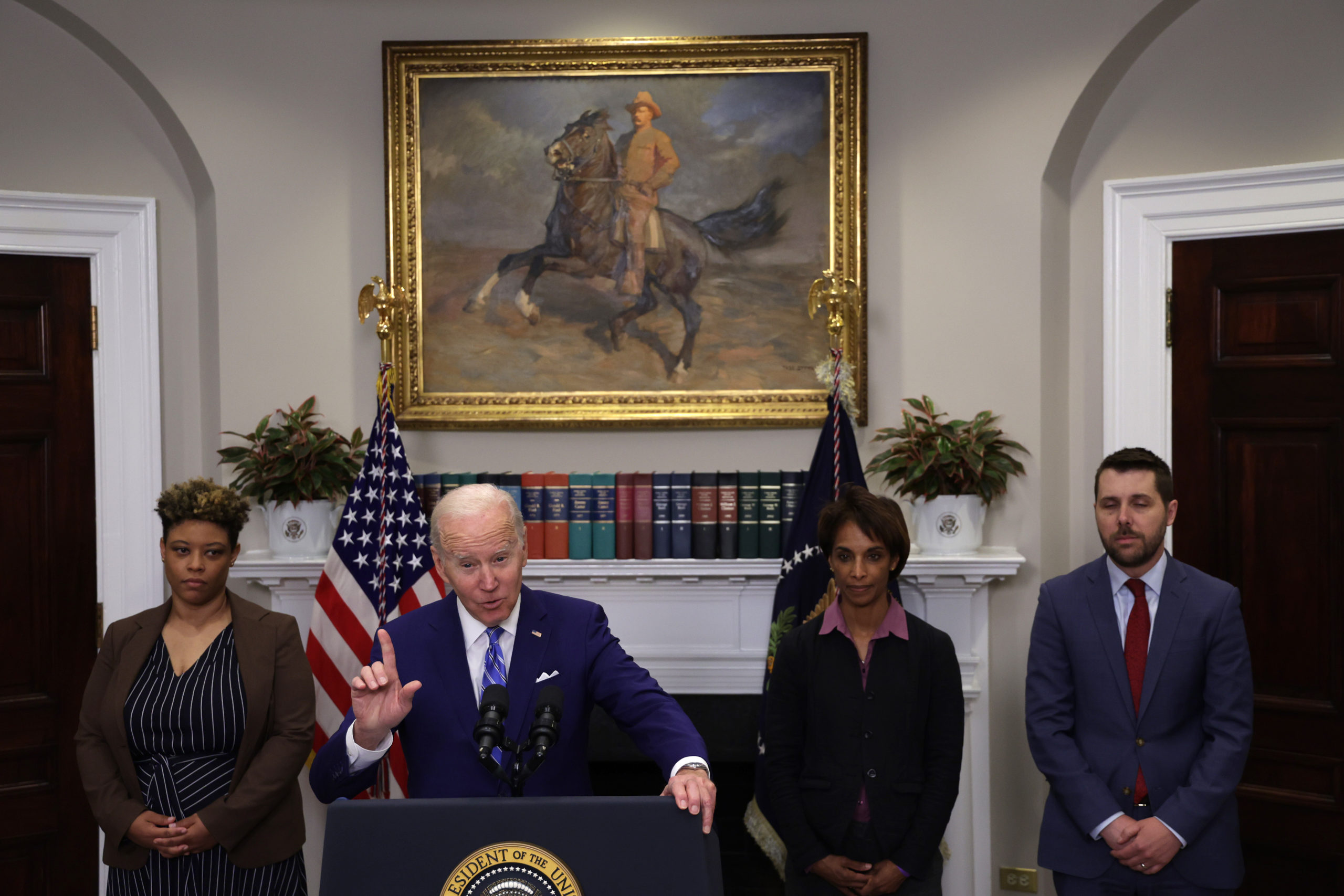 WASHINGTON, DC – MAY 04: U.S. President Joe Biden speaks as (L-R) Director of the Office of Management and Budget Shalanda Young, Assistant to the President & Chair of the Council of Economic Advisers Cecilia Rouse, Assistant to the President & Director of the National Economic Council Brian Deese, listen during an event at the Roosevelt Room of the White House May 4, 2022 in Washington, DC.  (Photo by Alex Wong/Getty Images)

“For the last four reports, the household job numbers have actually gone down on net, and we’ve had two big declines that dragged the whole number down,” Antoni stated.

Antoni further maintained that June’s unemployment rate was artificially low at 3.6% due to the way it is calculated.

“If we were to have a labor force participation rate that was on par with the pre-pandemic trend, the unemployment rate would be up to about 5%, putting us in a very similar position to the late spring or early summer of 2008, with that recession,” said Antoni.

The loss of quality full-time jobs and working hours is also being exacerbated by rising inflation. The Consumer Price Index rose 1.0% in May and rose 8.6% over the last 12 months, according to the BLS.

“They thought they could dump $6 trillion worth of liquidity into the economy and dawdle for a whole year and expect there not to be any inflation,” Antoni said of the Federal Reserve.

Earnings are declining relative to prices due to the government’s poor monetary policy, according to Antoni. The Federal Reserve committed more than $6 trillion to prevent the economic downturn caused by the pandemic and its economic shutdown in 2020.

“Average earnings are way up under Biden, but once you factor in prices and look at real average earnings, they’re down over 5% since he took office.

The BLS reiterated the differences between the household and establishment surveys in response to the DCNF’s request for comment.