The Biden administration’s damage to public education can be undone by Republicans with a few important reforms, former Secretary of Education Betsy DeVos told the Daily Caller News Foundation.

DeVos has a five-point plan to reform education that Republicans should campaign on now and implement when they retake Congress, she told the DCNF. The five points include education freedom, eliminating the Department of Education (DOE), supporting multiple pathways to post-K-12 education, federal student aid reform and restoring Title IX.

DeVos told the DCNF that educational freedom, or the ability of parents to send their children to a wider array of schools, is the most important reform. A free education environment will allow students to receive funds to transfer from public schools to different education options such as charter schools, private schools and homeschooling, DeVos explained.

“The last two years, children have been held hostage to this cause or these multiple causes and a system that too many of them cannot escape,” DeVos told the DCNF. “The solution to that is to have policies that will actually allow the resources to follow the family, to follow the child, to wherever their family decides they’re going to learn best.” 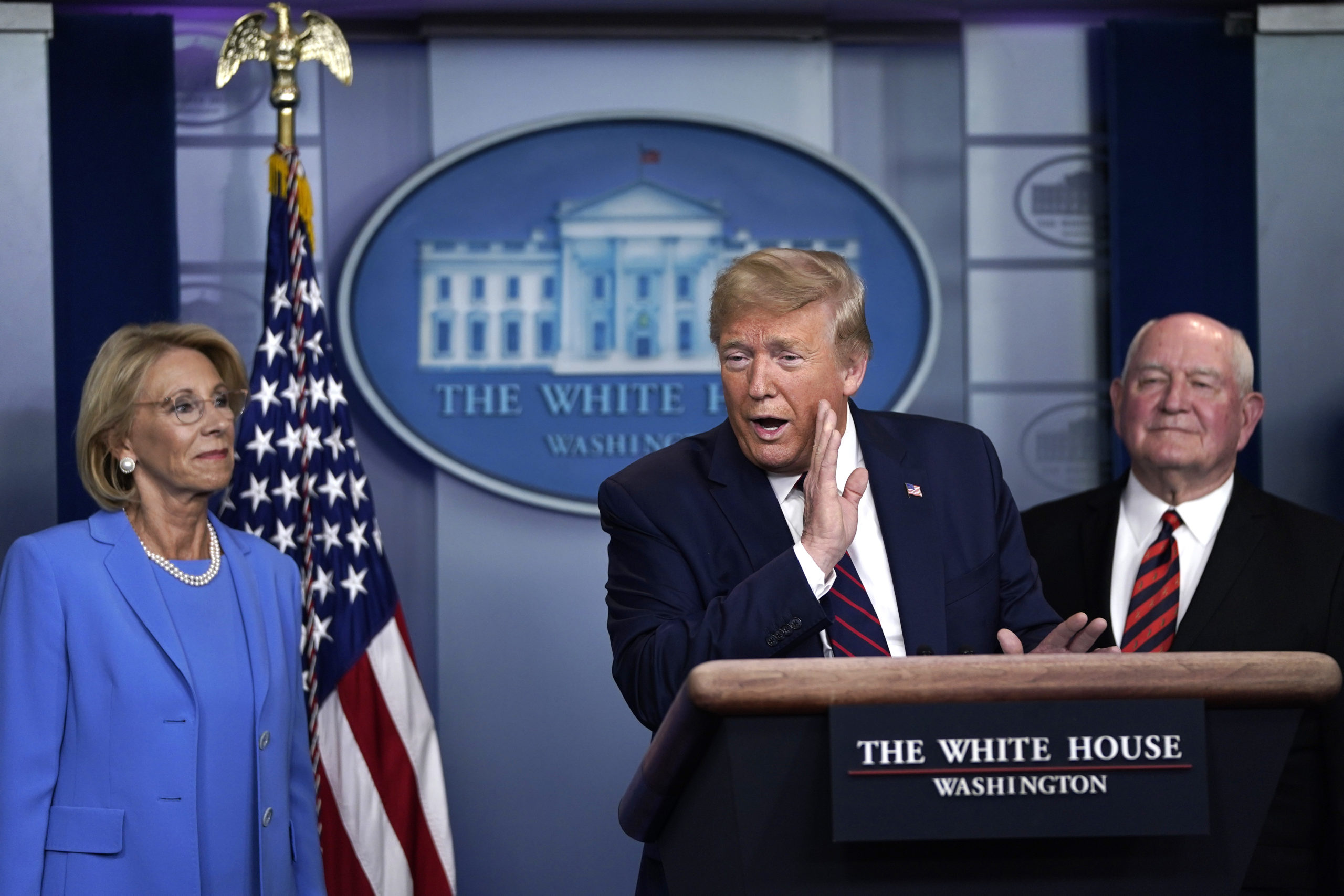 U.S. President Donald Trump speaks as Secretary of Education Betsy DeVos and Secretary of Agriculture Sonny Perdue look on during a briefing on the coronavirus pandemic in the press briefing room of the White House on March 27, 2020 in Washington, DC. President Trump signed the H.R. 748, the CARES Act on Friday afternoon. Earlier in the day, the U.S. House of Representatives approved the $2 trillion stimulus bill that lawmakers hope will battle the economic effects of the COVID-19 pandemic. (Photo by Drew Angerer/Getty Images)

While the Trump administration failed to significantly shrink the DOE, DeVos believes it is still possible and necessary for Republicans to do, she told the DCNF. (RELATED: EXCLUSIVE: Trump’s Education Secretary Has A Plan To Stop Woke Brainwashing In Schools)

“Shrink or do away with the Department of Education. I think that Republicans have talked about it for many, many years, but I think it actually would be feasible to do, practically speaking, by blocking grants to the states, which is what we proposed, in the last two years of our budget and presented to Congress to debate. There was some interest among Republicans but not enough to get a lot of airspeed,” DeVos told the DCNF. “Just watching how the system has performed or not performed the last two years, I think makes this argument of shrinking the department to be much more potent.”

As college enrollment is down nationwide, DeVos believes apprenticeship programs need to be expanded because it benefits young people to learn through experience, she said to the DCNF.

“We need to be supporting multiple pathways post-K-12 years, including expanding apprenticeship opportunities. The Trump administration established an industry that recognized apprenticeship programs, which then the Biden administration immediately did away with because it didn’t require participants to be union members,” DeVos told the DCNF.

Reversing Biden’s Title IX changes is another important issue for DeVos because of the way Biden’s plans will fundamentally change women’s sports, she told the DCNF. The Biden administration’s proposed extension of Title IX could make public schools let biological men participate in women’s sports and share the same locker rooms as the female athletes.

DeVos elaborates on her plan to save the American education system, as well as her time in the Trump administration, in her book titled “Hostages No More,” which was released on June 21.

“The American creativity, ingenuity and entrepreneurship is going to more than rise to the occasion when families are empowered with those resources to make those decisions and choices for their kids,” DeVos told the DCNF.