Moms For Liberty (MFL) posted a tweet questioning the intentions of teachers and adults pushing gender theory Monday morning. The tweet called gender dysphoria a “mental disorder” and claimed that “predators” across the country seek to take advantage of its increasing prevalence, particularly in schools.

“I think we have seen across the country that there is a coordinated effort to push transgender ideology on our kids. Moms For Liberty is calling it out, moms are calling it out. It is the truth that gender dysphoria is a mental disorder,” MFL co-founder Tiffany Justice told the Daily Caller. “We are being censored for saying the truth,” she continued. (RELATED: Left-Wing Activists Urge Big Tech To Censor Anti-Pedophile ‘Smear’)

“The only people that the term ‘groomer‘ is offending are groomers. Normal people are not offended because they are not doing it,” Justice added. 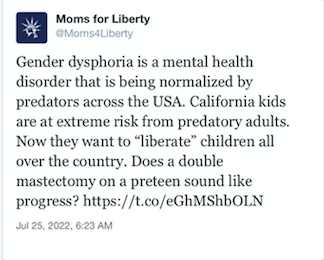 The American Psychiatric Association (APA) replaced “gender identity disorder” with the term “gender dysphoria” when it released its updated manual in 2013, according to Human Life International. The number of young people who identify as transgender has almost doubled in recent years, according to a New York Times analysis from June. (RELATED: Puberty Blocker Producer Sponsors Left-Wing Youth Trans Group)

MFL is a grassroots 501 (c) (4) that “is dedicated to fighting for the survival of America by unifying, educating and empowering parents to defend their parental rights at all levels of government,” according to its website. The activist group does so by holding public officials to account through civic engagement, spreading awareness, and opposing government overreach.