The City University of New York (CUNY) university system allegedly failed to address numerous antisemitic incidents and attacks in its schools over the past decade, according to a complaint.

The American Center for Law And Justice (ACLJ) sent a letter on July 19 to the Department of Education (DOE) requesting an investigation of CUNY, which includes 25 public campuses, to determine whether the university system discriminated against Jewish students and permitted a “hostile environment” for Jews. The complaint also asks the DOE to determine whether CUNY violated Title VI of the Civil Rights Act of 1964, which prohibits any institution receiving federal funds from discriminating the basis of race, color or national origin.  (RELATED: ‘Hostile Environment Of Anti-Semitism:’ Biden Admin To Investigate Major University)

“CUNY has done nothing to protect its observant and Zionist Jewish faculty members from a scheme of ongoing discrimination, retaliation, harassment and a hostile work environment,” the complaint states. “At the Professional Staff Congress’ demand, CUNY has even refused to investigate the myriad allegations of antisemitism asserted by observant and Zionist Jews against the PFC Respondents and has thus tacitly endorsed the widespread antisemitism and discrimination.”

The complaint highlights several incidents of alleged antisemitism at CUNY since 2013 which targeted professors. For instance, a Jewish professor was allegedly asked by her students “how many students she had killed,” and another professor allegedly had swastikas etched into her classroom door and had urine poured on her keyboard.

At Kingsborough Community College in 2018, a photograph of former college president Leon Goldstein was allegedly violated with the words “F— Trump. Kill the Zionist Entity,” and flyers featuring images of Goldstein’s teenage daughter were circulated around the school, according to the complant. A newspaper called the “Challenge” published and distributed articles around campus calling Goldstein a “racist, anti-Muslim and anti-gay,” but no disciplinary action was taken by the college. 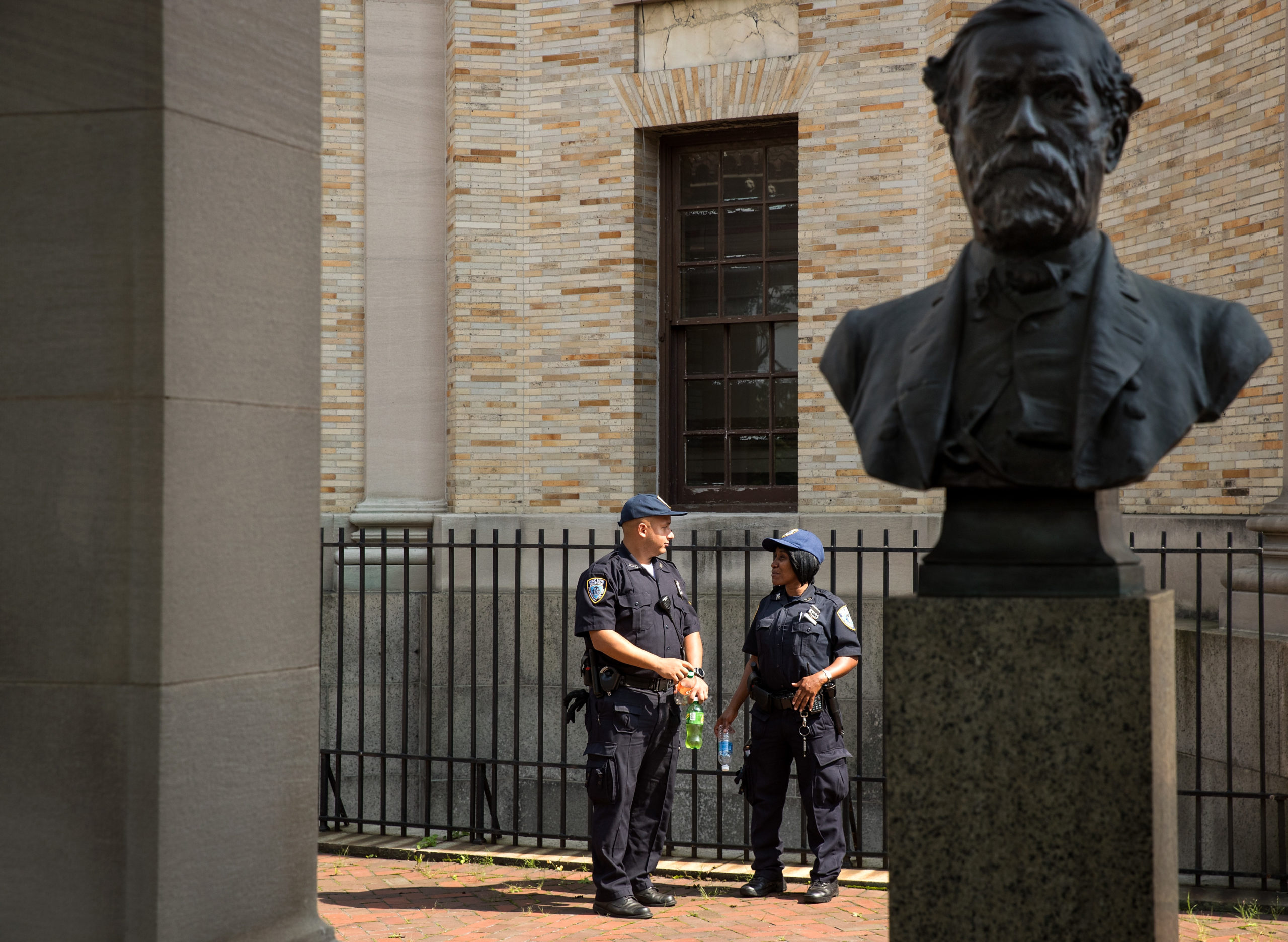 Two City University of New York Public Safety Department officers stand and monitor the area around a bust of Robert E. Lee as it stands in the ‘Hall of Fame for Great Americans’ on the campus of Bronx Community College, August 17, 2017 in the Bronx borough of New York City. (Photo by Drew Angerer/Getty Images)

Student members of the Brooklyn College Israel Club were allegedly verbally abused and called “dirty jews” by fellow students, and graffiti of swastikas were found on the campus in 2013, the lawsuit states. Moreover, the campus library at the John Jay College of Criminal Justice was vandalized with swastikas and a student was allegedly called a “zionist pig” in 2015.

Additionally, the CUNY Doctoral Students’ Council created a “Boycott, Divestment, Sanctions” club despite warnings from ACJL that adopting the club would send a “clear antisemitic message,” the complaint stated.

“CUNY has become a hotbed for discrimination and antisemitism,” the complaint reads. “Students and faculty at Baruch College, John Jay College of Criminal Justice, Brooklyn College and Hunter College, among others, have complained about the antisemitic climate on their individual campuses. Jewish students and faculty have consistently reported feeling physically unsafe.”

The DOE, ACLJ and CUNY did not immediately respond to the Daily Caller News Foundation’s request for comment.