A Rhode Island mom is suing her school district’s Black Indigenous and People of Color (BIPOC) Advisory Committee for allegedly blocking her from attending the group’s meetings, which push anti-racism, according to the lawsuit.

The Goldwater Institute filed a lawsuit on behalf of Nicole Solas, who is white, against the South Kingstown BIPOC Advisory Committee of South Kingstown School District, in Wakefield, Rhode Island, who allegedly denied Solas access to the board’s meetings, according to the Aug. 3 lawsuit. Rhode Island state law requires any school committee who has “advisory power” to be open to the public. (RELATED: ‘It’s Just Not Fair’: Virginia Mom To Call On State Legislature After School Suspended Her Kids For Not Wearing A Mask)

The South Kingstown School Committee stated that the advisory board would be made up of “black and brown students, teachers and families” to “identify how you can change systems representatives who may not be actively anti-racist like administrators, school committee members, educators,” according to a June 23, 2020 public recording of the meeting. The advisory board’s mission statement says one of its goals is to create a “culturally diverse, anti-racist curriculum,” according to public documents.

The BIPOC Advisory Committee is made up of public officials, uses public funds and advises the school on “equity in education,” the lawsuit states.

“I wanted to go to their meeting. When I asked to go, the superintendent told me well this is not a subcommittee that would be subject to Open Meeting Laws, this is an advisory committee, meaning it’s up to them if they want to have a closed-door meeting,” Solas told the Daily Caller News Foundation. “I had to contact the committee instead of the school and when I contacted the facilitator or leader, and I said I’d like to come, she said ‘well we are a private vendor and we’re having closed-door meeting.'” 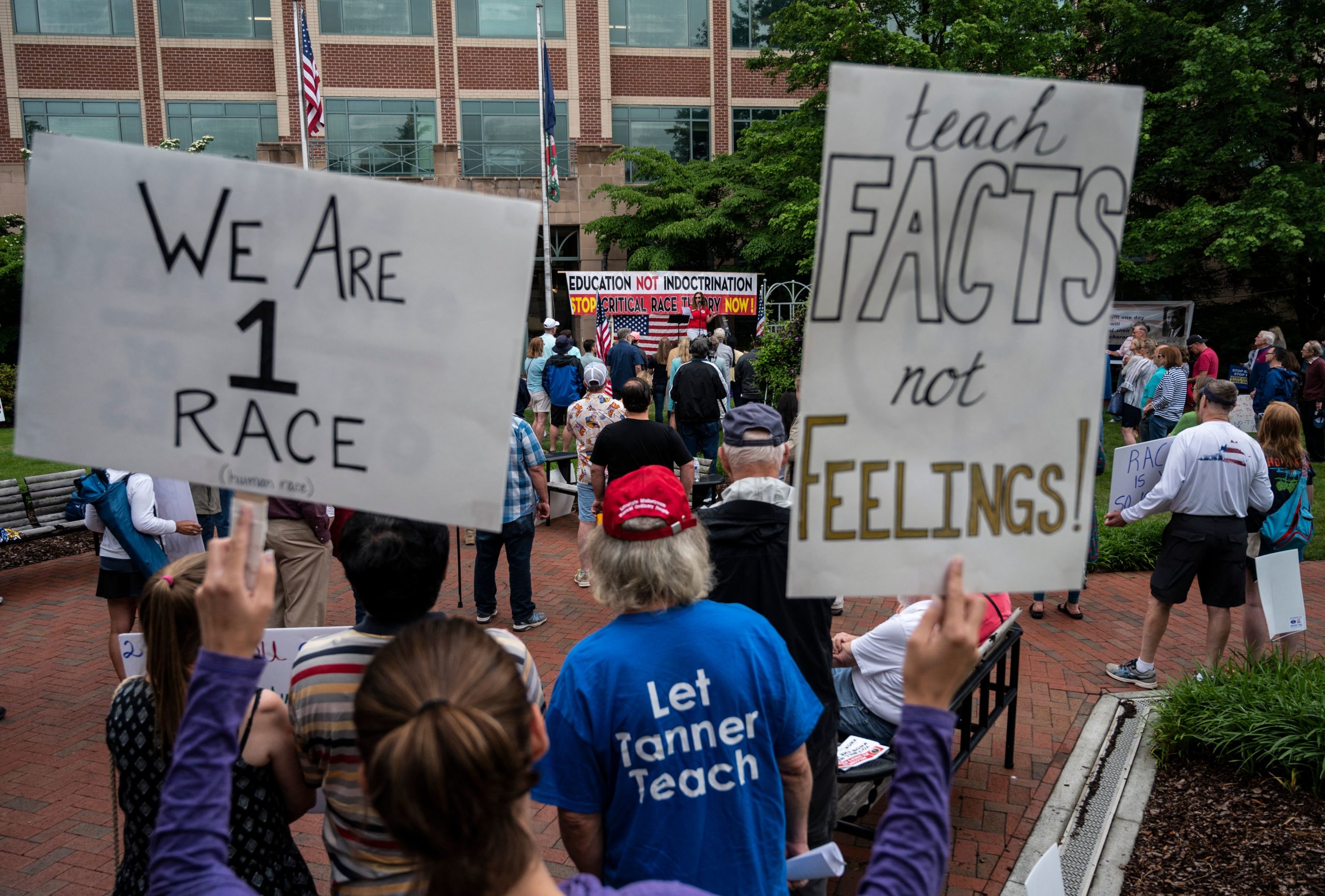 People hold up signs during a rally against “critical race theory” (CRT) being taught in schools at the Loudoun County Government center in Leesburg, Virginia on June 12, 2021. – “Are you ready to take back our schools?” Republican activist Patti Menders shouted at a rally opposing anti-racism teaching that critics like her say trains white children to see themselves as “oppressors.” “Yes!”, answered in unison the hundreds of demonstrators gathered this weekend near Washington to fight against “critical race theory,” the latest battleground of America’s ongoing culture wars. The term “critical race theory” defines a strand of thought that appeared in American law schools in the late 1970s and which looks at racism as a system, enabled by laws and institutions, rather than at the level of individual prejudices. But critics use it as a catch-all phrase that attacks teachers’ efforts to confront dark episodes in American history, including slavery and segregation, as well as to tackle racist stereotypes. (Photo by ANDREW CABALLERO-REYNOLDS / AFP) (Photo by ANDREW CABALLERO-REYNOLDS/AFP via Getty Images)

Before filing the lawsuit, however, Solas filed a complaint with the Rhode Island Attorney General Peter Neronha who dismissed the complaint stating the committee was not a public body, according to documents obtained by the DCNF.

Solas also previously requested a tour of the school following a statement of solidarity after the George Floyd protests, but was ignored, documents obtained by the DCNF show. The Goldwater Institute made an additional information request on behalf of Solas seeking for Critical Race Theory in the schools’ curriculum, but the school requested $74,000 in order to access the public information, according to a Goldwater Institute press release.

“When George Floyd and Breonna Taylor were murdered an alarm was once again sounded that we must do something to address this deadly racism. The time is now,” the statement of solidarity by South Kingstown School Committee Chair Stephanie Canter read on the schools’ website. “Critical knowledge, radical empathy, and intentional action are non-negotiable. This is not a time for platitudes and distractions. This is a time for active anti-racism and nothing less.”

“It’s really about the initial message of solidarity that got sent out to the community, that the beginning when I said something’s definitely wrong,” Solas told the DCNF.

The filing of the lawsuit followed Solas’ history with the school and since she has pulled her 6-year-old daughter out of the district and into a private institution, she told the DCNF.

“This is happening across the country, school district and state Department of Educations are creating what they’re calling advisory committees and they’re doing that in order to circumvent Open Meeting Laws and have the public not see the work that these committees are producing, and then give it to school districts, pretending like the school district isn’t already going to take every recommendation that they provide to them,” Solas told the DCNF.