Former President Donald Trump alleged Wednesday that Federal Bureau of Investigation (FBI) agents did not allow staff or his lawyers to watch their raid on his Mar-A-Lago residence while hoping the agency did not “plant” evidence.

The former president’s Florida residence was raided by FBI agents Monday night in connection to an investigation regarding 15 boxes of documents that Trump allegedly took with him from the White House, with some reportedly containing classified information.

“The FBI and others from the Federal Government would not let anyone, including my lawyers, be anywhere near the areas that were rummaged and otherwise looked at during the raid on Mar-a-Lago,” Trump said in a post on his Truth Social account. (RELATED: ‘A Very Good Day For Donald Trump’: Alyssa Farah Griffin Says The DOJ May Have ‘Handed’ Trump 2024 After Raid) 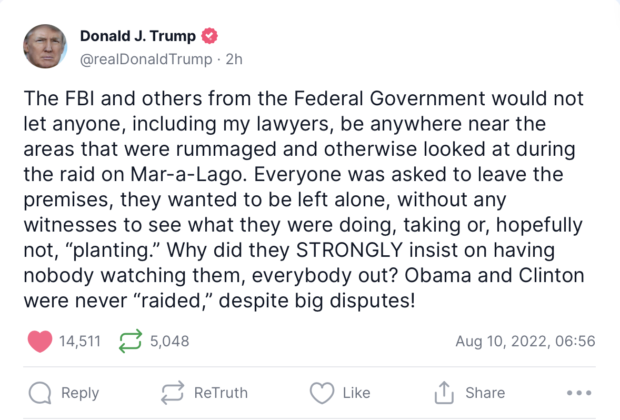 “Everyone was asked to leave the premises, they wanted to be left alone, without any witnesses to see what they were doing, taking or, hopefully not, ‘planting,'” Trump continued, adding that “Obama and Clinton were never ‘raided,’ despite big disputes!”

Lindsey Halligan, a Florida-based lawyer who works for Trump, told CBS News that her and another attorney, Christina Bobb, could not enter the residence during the raid and were forced to wait outside. The agents were on site for approximately eight hours, while a Ryder truck was present at the property, Halligan told the outlet.

Trump previously called the raid “prosecutorial misconduct” in a statement Monday night shortly after the raid, claiming he had been cooperating with Government agencies before the unannounced search.

“These are dark times for our Nation, as my beautiful home, Mar-A-Lago in Palm Beach, Florida, is currently under siege, raided, and occupied by a large group of FBI agents,” Trump said. “Nothing like this has ever happened to a President of the United States before.”