Maloney is running against fellow Democratic New York Rep. Jerry Nadler in a 12th District member versus member primary caused by redistricting, while Goldman is challenging Rep. Mondaire Jones in the state’s 10th District. Nadler served as lead impeachment manager during Trump’s first trial, while Goldman served as House Democrats’ lead counsel. Nadler and Goldman lead in polling for both races and have received endorsements from The New York Times.

“Lawyer Dan Goldman is running for Congress, NY-10, and it is my great honor to Strongly Endorse him. I do this not because of the fact that he headed up the Impeachment Committee and lost, but because he was honorable, fair, and highly intelligent. While it was my honor to beat him, and beat him badly, Dan Goldman has a wonderful future ahead,” Trump said. 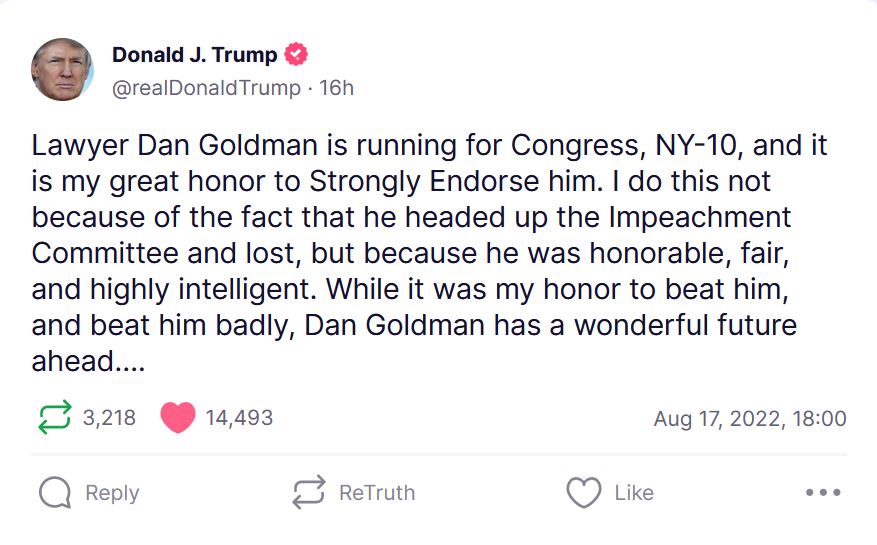 “On the other hand, Jerry Nadler is likewise a hard driving man of the people, whose energy and attention to detail is unlike anyone else in Congress. He is high energy, sharp, quick-witted, and bright. You can’t go wrong with either, but Carolyn Maloney is the better man. She will lead our Country into a very GREEN and prosperous future. Carolyn has my Complete and Total Endorsement, she will never let our Conservative Movement down!” he continued. 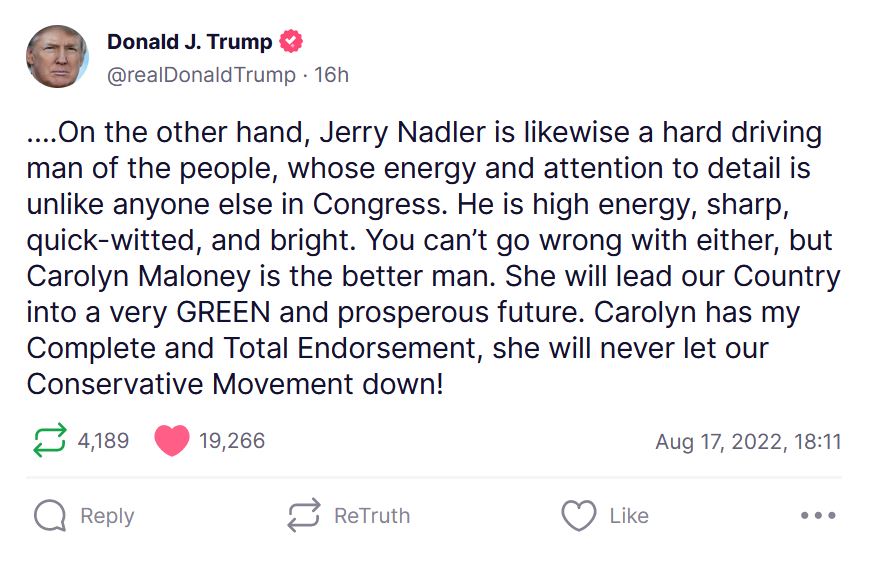 The former president is known to offer joke endorsements in primaries, although he has not previously endorsed any Democrats. The former president endorsed “Eric” in the Missouri GOP Senate primary, after being unable to decide between Attorney General Eric Schmitt and former Gov. Eric Greitens. (RELATED: Trump Refuses To Endorse GOP Senate Candidate In Crowded Race, Praises Greitens)

Appeals to identity have taken center stage in both primaries. Maloney claimed in an ad that New Yorkers should send her back to Washington, D.C., because she is doing “a woman’s job,” while Nadler has highlighted his status as the last Jewish member of New York City’s congressional delegation. Suraj Patel, who is also running in the Twelfth, has suggested that being nearly 40 years younger than Nadler and Maloney will allow him to better represent the district.

Goldman is running against Jones in the 10th district, as well as several other local elected officials. Left-wing outlets complained that the Times’ decision to endorse Goldman was rooted in racism and sexism, since he is the only white man running in that race. Goldman also has extensive connections to the Sulzberger family, which owns the newspaper.