A federal judge issued a temporary restraining order Tuesday blocking a Colorado county from banning the sale and manufacturing of certain semi-automatic weapons and high-capacity magazines.

U.S. District Court Judge Charlotte Sweeney issued the order against Boulder County, ruling in favor of plaintiffs Rocky Mountain Gun Owners, the National Association for Gun Rights and resident Martin Carter Kehoe. On Aug. 2, the county adopted an ordinance banning the sale, transfer and manufacturing of so-called “assault weapons,” high-capacity magazines and “rapid-fire trigger activators.” Individuals were not prohibited from possessing any of the aforementioned items.

Sweeney cited the recent Supreme Court decision that struck down a New York law requiring people to prove a special need for self-defense when applying for a concealed carry permit. The court ruled 6-3 that individuals have a constitutional right to self-defense outside of their homes. 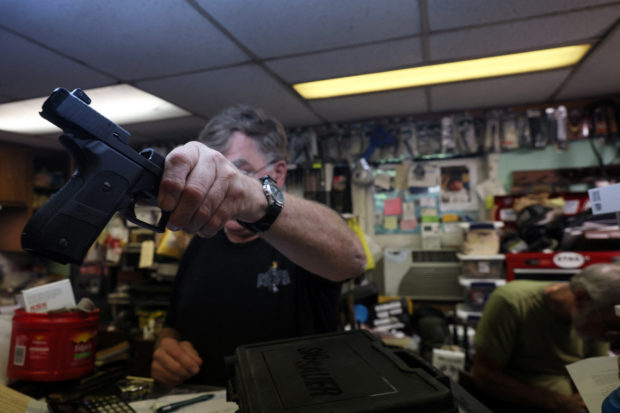 Rich Selmeyer, co-owner of The Gun Shop at MacGregor’s, hands a firearm to a person for inspection in Lake Luzerne, New York, U.S., July 19, 2022. REUTERS/Shannon Stapleton

“We are on fire, we just can’t stop winning in the courts,” Rocky Mountains Gun Owners Executive Director Taylor Rhodes said in a statement. “Because of the correctly decided Bruen decision authored by Justice [Clarence] Thomas this summer, the floodgates are open, and we are taking back the rights that evil tyrants stole from us. All judges, no matter their political persuasion, will be forced to rule that our right to keep and bear arms cannot be infringed — and that’s exactly why this [temporary restraining order] was issued.”

The city of Boulder announced Tuesday it would voluntarily and “temporarily pause enforcement of its ban … to allow time for more legal coordination among neighboring jurisdictions.”

“We always anticipated that some of our gun violence prevention measures might face legal challenges,” City Attorney Teresa Taylor Tate said in a statement. “While these rulings are not directly related to the City of Boulder’s measures, we believe it is prudent to work with our neighbors on a coordinated legal strategy.”

Tate said the cities of Boulder and Louisville will seek to consolidate with Boulder County to take on the case.