A grassroots organization is making its final push to shut down the Biden administration’s proposed changes to Title IX.

The Department of Education (DOE) unveiled plans in June to revise Title IX to prohibit schools from discriminating on the basis of sexual orientation and gender identity. Heritage Action has launched a comment portal for those to voice their opposition to the Title IX revisions, which has collected more than 11,000 comments, accounting for at least 10% of all comments submitted, according to a press release obtained by the Daily Caller News Foundation. (RELATED: ‘Save Their State’: Parental Rights Symposium Series Kick-Off In California)

“You would think it’s just parents, right? Just parents that are worried about their kids, specifically, girls that are in sports, but it’s actually much more broad than that,” Heritage Action Executive Director Jessica Anderson told the DCNF. “It’s activists of all ages, all different walks of life and stages of life who see a huge overreach by the Department of Education with this potential new role, how it’s going to put women’s safety at risk, women’s privacy at risk and then all the scholarship components that would be a major consequence of this role.”

In previous efforts, Heritage Action has received 5,000 comments for the U.S. Securities and Exchange Commission’s (SEC) Climate Disclosure Rule, with the Title IX effort more than doubling in size, the press release obtained by the DCNF stated. The deadline for submitting comments against the Title IX revisions is Sept. 12.

Heritage Action’s Toolkit for halting the revisions to Title IX details how the proposal will harm women including, children and women’s safety. The toolkit explains that up to 98% of children accept their sex by adulthood if they struggle with their identity. 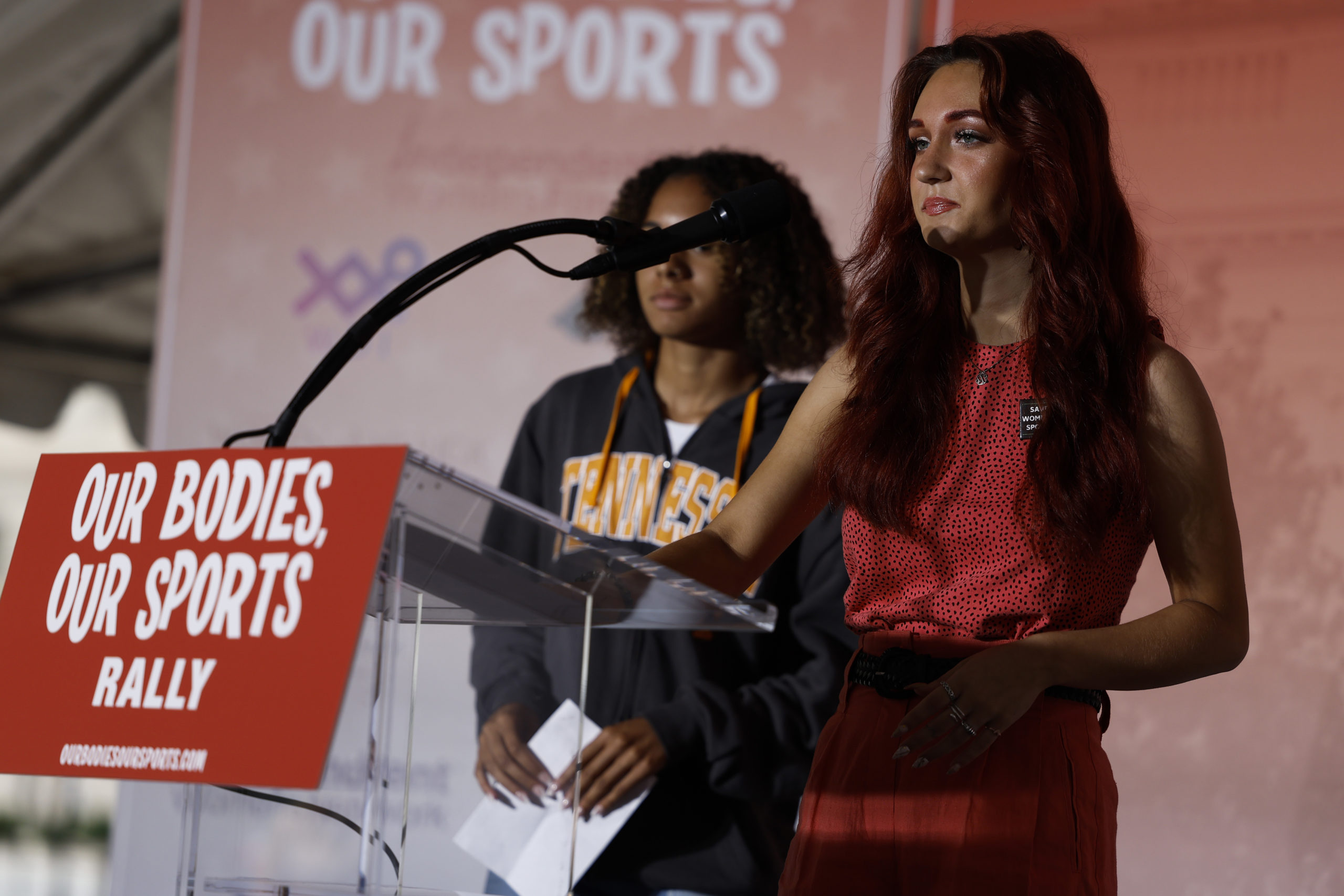 Selina Soule and Alanna Smith, two former Connecticut high school track athletes, speak during an “Our Bodies, Our Sports” rally for the 50th anniversary of Title IX at Freedom Plaza on June 23, 2022 in Washington, DC. The rally, organized by multiple athletic women’s groups, was held to call on U.S. President Joe Biden to put restrictions on transgender females and “advocate to keep women’s sports female”. (Photo by Anna Moneymaker/Getty Images)

The organization also provides information on the “Protection of Women and Girls In Sports Act” which was introduced to Congress by Florida Republican Rep. Greg Steube in January. The act aims to ensure that females only have to compete against other biological females, blocking some of the DOE’s revisions to Title IX.

Heritage Action key voted “yes,” an effort to emphasize the prominence of the bill on the legislation, the organization told the DCNF.

“Fifty years of equality for women on the athletic field would be destroyed by what this Administration wants to do to Title IX,” Steube told the DCNF. “If successful, President Biden’s reversal of Title IX protections for women would be a slap in the face to every female athlete. I cannot underscore enough how drastic this proposal is: it effectively cancels biological sex – on teams, in locker rooms, in dorms, and in scholarship selections.”

“I’ve been so encouraged that activists agree and recognize that they too can push back against the Biden regime by submitting comments,” Anderson told the DCNF. “They’re engaging in such a full throated way.”